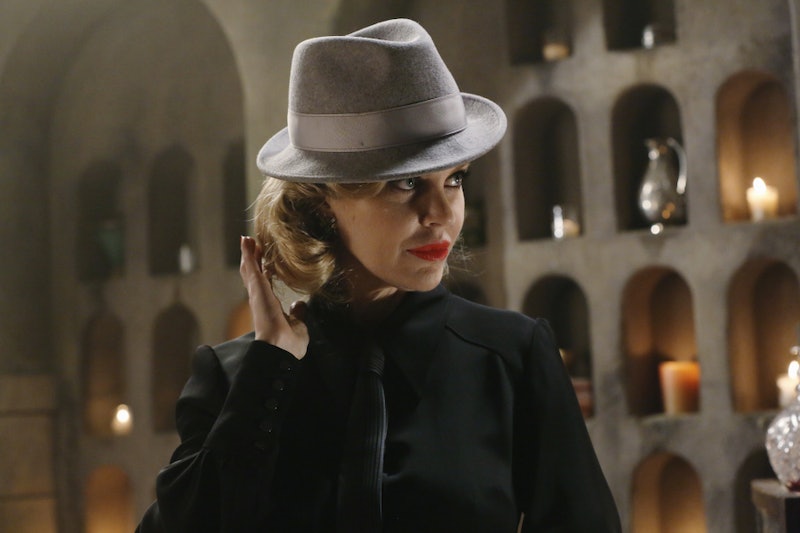 Last week, we learned on Once Upon A Time that Maleficent was pregnant at the same time as Snow White, before Regina's Dark Curse, and "lost her child" due to something that Snow and David had done. Call me an optimistic Charming, but I think there has to be more to the story, and the baby actually survived. However, let's start at the beginning of this development. Who is the father of Maleficent's child? It's probably not Hook, as he revealed to Emma, his current squeeze, that he and Ursula had a history, but didn't mention knowing the other Queens of Darkness.

As a dragon, Maleficent is part reptile, so I suppose she could have laid an egg rather than giving birth. However, I think we're more likely to be in for a story about Maleficent's tragic romantic past with a human rather than a run-in with a visiting Hungarian Horntail. Entertainment Weekly's Hilary Busis suggested Scar from The Lion King for the father, but I don't even want to think about those logistics.

According to the official ABC press release for Sunday's episode "Enter the Dragon," a flashback will show us a time when "Regina befriends Maleficent and helps her to rekindle her lost spark." One could assume that Regina is giving her romantic advice. Don't tell the Evil Queen that I said this, but she would not be my first choice in that area. Then again, she was out Christian Grey-ing Christian Grey at the time (Regina enchanted the Huntsman, played by Jamie Dornan, to be her lover), so maybe I should reconsider. Here are a few other contenders for the father of Maleficent's lost child.

A villainess should have a villainous beau, don't you agree? While we haven't met the Prince of Thieves himself, Aladdin's nemesis has appeared in this universe before. He was the antagonist of Once Upon A Time In Wonderland, last year's limited series spinoff. The relationship that Jafar had with both the Red Queen and the Jabberwock on that show makes me think that someone as campy as Maleficent might be right up his alley. Plus, with all the Lost references on this show, it would be great to get Naveen Andrews back!

I loved OUAT in Wonderland to death. It was less twisty than regular formal OUAT and full of heart. I would really like to see the two shows blend a little more. This would also help tie down what Will Scarlet is doing back in Storybrooke and why he was kissing Belle. Are we ever going to learn what happened to Anastasia? I can't be the only person who cares about that.

If Maleficent is working with Regina to get her groove back or whatever, then it's possible that she hooked up with someone close to Regina. Sidney is also likely to be connected to the Author, which would tie everything up nicely. There's just one problem... he's trapped in a mirror.

That family tree is convoluted enough as it is, what's one more love child? They're both so infant-obsessed, they make a natural pair of evil parents. However, the only way this would work is if Rumple didn't know anything about the baby. He would not have allowed Mary Margaret and David to live if he knew what went down.

Wouldn't that be a scandal? Aurora's royal father will appear in the upcoming episode. Personally, I'm only interested in exploring Sleeping Beauty's story if Once Upon A Time plans to explain why Mulan didn't get sent to Storybrooke with the rest of Robin Hood's Merry Men. However, this would be an interesting twist and help explain why Maleficent went after that particular family in an Enchanted Forest that's chock full of royals.