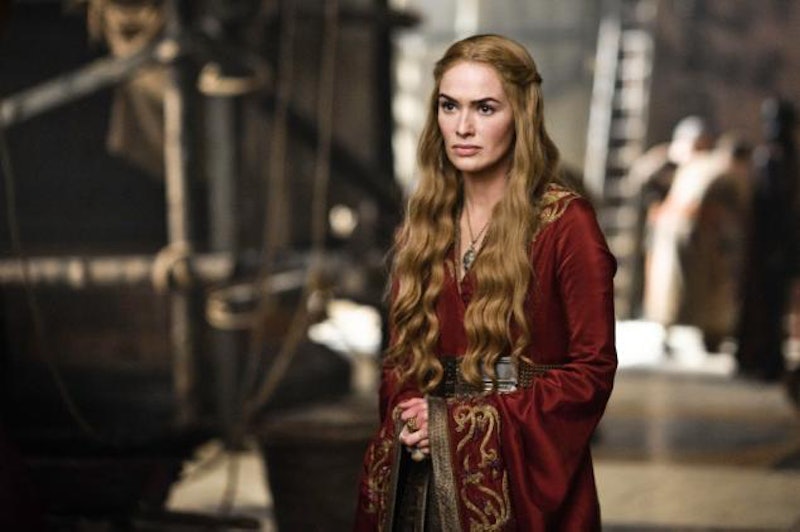 Cersei Lannister is perhaps one of the most villainous characters in television history. Though she is not quite as sick and sadistic as some of the other characters on Game of Thrones, her manipulation skills make her extremely dangerous. From the pilot episode of the show, Cersei has been plotting to gain control at King's Landing. She's carried on a a long term sexual affair with her twin brother, plotted to murder her own husband, and has generally just been a mean and nasty human being. Since she's gotten away with so much, I never thought Cersei would be humbled, but this past season brought the golden haired queen to her knees — though that might just mean Cersei will get revenge on Game of Thrones .

I never thought that I would feel bad for Cersei but, after her horrendous walk of shame, I felt terrible. In order to begin repenting for her "sins," Cersei was forced to walk nude through the streets of King's Landing as people leered at her body, throwing food at her. It was truly horrific to witness. But, when she finally reaches the Red Keep, she is greeted by Qyburn and The Mountain, who Strong has resurrected from the dead. After having to endure such awful treatment, most people would surely feel defeated. But, Cersei Lannister is not most people.

As The Mountain swoops her battered body up in his arms, Cersei has a gleam in her eyes that hints she's more than ready to seek retaliate against those who have wronged her. Here are seven things that could happen during Season 6 of Game of Thrones now that Cersei is back at King's Landing.

1. She Could Have King Tommen Committed

Let's be honest. King Tom is only enjoyable because he's not as horrible as his brother Joffrey. The teen king is sweet as pie, but, unfortunately, his sunny disposition will serve neither Westeros nor the Lannisters very well. After failing to do anything about his wife and mother's imprisonment, I think Tom's days of sitting on the Iron Throne are numbered. Since he's already taken to his bed, it shouldn't be too much trouble for Cersei to freeze her son out completely.

Her sexual involvement with her cousin Lancel Lannister is what got Cersei tied up with the High Sparrow in the first place. While she was trying to destroy the Tyrells, Lancel informed the High Sparrow about he and Cersei had an incestuous relationship. Lancel will be sorry he ever opened his mouth when Cersei is done with him.

3. The High Sparrow Is Going to Experience His Own Walk of Shame

Like every other person that she has manipulated in her life, Cersei thought she had the High Sparrow under her thumb. She was quickly proven wrong once the man had her stripped of her royal threads and thrown into jail. The High Sparrow might think he has the upper hand now, but whatever Cersei does to avenge herself will be far worse than her walk of shame. Cersei will be coming for the High Sparrow in Season 6, and, for his sake, I hope she doesn't find him.

4. Cersei Will Banish Her Brother Jamie From King's Landing

After aiding in their younger brother Tyrion's escape from prison, which led to their father's murder, Cersei isn't too pleased with her twin brother/lover Jamie. If their daughter Myrcella doesn't return to King's Landing alive, Cersei will never forgive her brother. Jamie would be better off going to find Tyrion in Meeren.

5. Cersei May End Up Marrying Loras Tyrell After All

Prior to her imprisonment, Cersei was adamant about not marrying Loras Tyrell. She humiliated him and got him thrown in jail because of his sexual orientation. However, now that she is out of prison, Cersei's best bet may be to solidify the Lannister alliance with the Tyrells. Unfortunately, I'm not sure that the Tyrells would be willing, considering all of the pain that she's caused them.

6. She's Going to Decimate the Sparrows

After all the pain that the religious Sparrows have caused her, I'm certain Cersei will find a way to destroy them all. She already threatened the women who fed her in while she was imprisoned. We'll just have to wait until Season 6 to see her make good on her threats.

7. King's Landing Will Never Be The Same

During Cersei's imprisonment, not one member of the High Council besides Qyburn championed for her. To add insult to injury, people that Cersei has looked down upon all of her life gazed upon her naked body as she was humiliated in the street. Cersei is a smart and shrewd woman, so I'm confident that many people are going to pay for what what happened to her. A lot of blood will be split in King's Landing by the time she is finished getting her revenge.