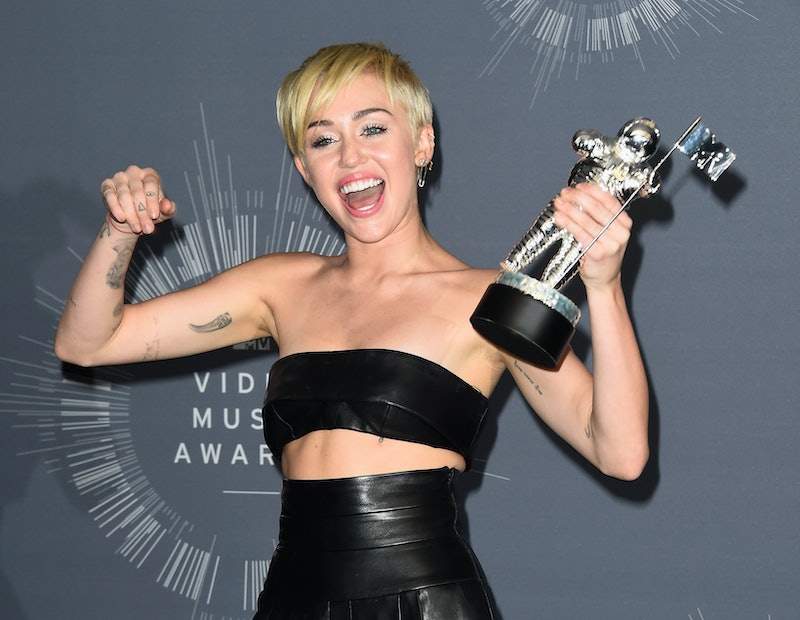 Well, this is exciting. Miley Cyrus will be hosting the 2015 MTV VMAs and I'm seriously wishing it was August already. Instead of performing this year, Miley will return to the stage with the duties of setting the tone at the controversial award show. Seriously, people, ANYTHING could happen.

Aside from being excited for Miley's role in the show, I also can't wait to see what her wardrobe will consist of. We all know that Miley has an eclectic style, so seeing her at the MTV VMAs will be a serious surprise, because like I said, anything goes and anything can happen. Do you remember her performance alongside Robin Thicke from 2013? Everyone was talking about it for a good year, so I'm guessing that Miley's attire will be anything but basic. Maybe more of those sequin shorts she wore on the Fourth of July? Or maybe she'll make a feminist statement with those famous pasties of hers? The possibilities are endless.

The awards show is set to air on August 30th at 9pm on MTV. Until then, we'll just have to wait and see what she is going to wear exactly...that is unless she posts some Instagram pictures as a teaser, which is actually very likely. I mean, she did post her host announcement wearing this green spandex body suit. Could this be a hint or something? Maybe alien-themed costumes?

In any case, we know her outfits will be very unique and we know there will be plenty of costume changes. She's got the past MTV VMAs to prove it.

Or perhaps this pigtail look from her 2013 appearance:

The girl's got bedazzled ensembles on point.

And then she performed on stage in this interesting teddy bear get-up:

She looked absolutely flawless at the 2012 MTV VMAs:

Love the long gown on her.

And then there was this gorgeous floral dress for the 2011 MTV VMAs:

Miley, please include a long gown in your attire that's all I ask!