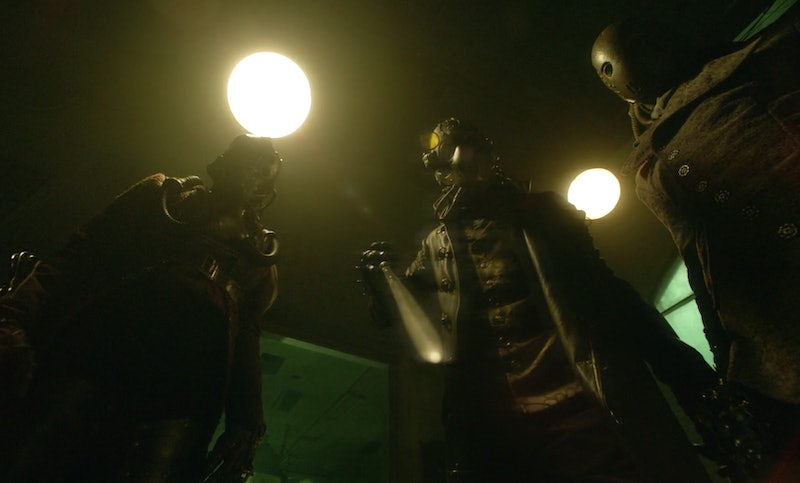 Alright, I'm just going to come out and say it. I hate the Dread Doctors you guys. The new Teen Wolf Season 5 villains are truly terrifying and I have no doubt in my mind that they will leave a ton of destruction in their wake, even after they are eventually (hopefully) vanquished. Before Monday night's episode, "A Novel Approach," we really didn't know much at all about these terrifying creatures. But thanks to a visit to Eichen House and Dr. Valack which ultimately turned ugly, we did learn a little bit about the Dread Doctors backstory, and new things about them, including what they can do to people without them even realizing it.

Scott, Kira, Stiles and Lydia all made a trip to visit Dr. Valack in Eichen House after seeing that the Dread Doctors book was dedicated to the mad doctor with the creepy third eye, and while they got some answers, they also started to see some terrifying consequences to taking on a fight against these big bad monsters. Only Lydia and Stiles were allowed to go see Dr. Valack thanks to Mountain Ash limiting Kira and Scott from his cell. They learned that the Dread Doctors book was actually written by Dr. Valack himself, so why dedicate it to himself?

Well first it's important to talk about what they are and why the book was written in the first place. Dr. Valack explains to Lydia and Stiles that the Dread Doctors began as scientists who worshipped the supernatural, which ultimately turned them into whatever part-man part-creature they are now. They have immense power, which includes allowing them to make their victims forget that they've seen the Doctors. Sounds a lot like The Silence from Doctor Who , am I right?

Dr. Valack explains that he wrote the book as a guide for himself and for anyone who might have had contact with the Dread Doctors, but can't remember what they did to them. He tells Lydia and Stiles that if anyone who reads the book will remember the Doctors' experiments or any other kind of interactions people may have had with them. Oh and Dr. Valack doesn't come out completely unscathed after giving away so much information about the Dread Doctors. They make their way into Eichen House thanks to Kira's uncontrollable powers and they steal his third eye away from him.

Since Lydia has already seen the Doctors in flashes on the operating table, it's likely they've already done something to her. Could they have done something to Stiles as well? He's already freaking out thanks to killing Donovan out of self-defense and then seeing that the body was taken away by someone or something (it turns out to be Parrish, which is yet another mystery), and now he might be hallucinating things about the murder. It's possible that Stiles is just having a tough time with this horrible act he had to commit, but what if the Doctors use it to their advantage? Things are getting bad on Teen Wolf you guys, and I'm really scared for the future of our beloved pack. Damn you Dread Doctors!