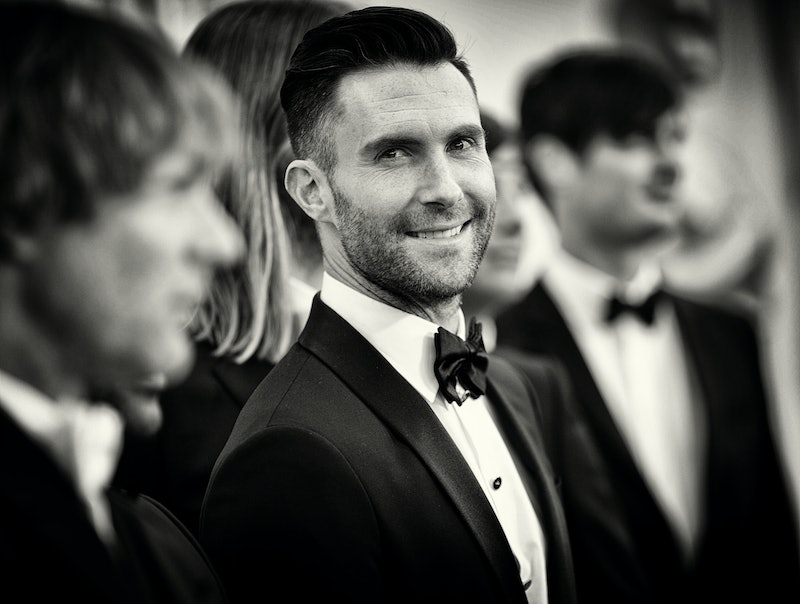 The dog days of summer are murder when you have really long hair sticking to your neck and summoning sweat, but here's a little secret — it's no party when you have short hair, either. That's likely why Maroon 5 singer and The Voice coach Adam Levine shaved his head for summer. The newly shorrn, former Sexiest Man Alive, as anointed by PEOPLE, normally has a thick crop of black locks. But now he has shaved his head down to the scalp. It's both hot and cool.

Levine looks majorly sexy since he posed while shirtless, something he does often. He likes showing off his sleeves and his torso of tattoos, which almost act as accessories. That's the hot part, obviously.

But it's also cool, since it's been a fairly steamy summer and less hair means a more breathable scalp. It's also low maintenance, requiring less time than wash 'n' go. Although Levine has proven to be a deliciously metro man.

Even though Levine ditched his hair, he's still pretty well-scaped. He always has some degree of five o'clock shadow. His brows are on fleek, too. But he only has eyes for his wife, model Behati Prinsloo, who also looks summery thanks to her messy ponytail.

I dig Adam Levine with a shaved head. It's hair. It'll eventually grow back... in like two weeks.

That's really short! A shirtless Levine means you get a good look at his heavily decorated torso.

Here he was a few weeks ago, with a full head of hair and no shirt, showing off his ink!

The singer and reality show judge rocked a graphic tee, but still bared his tattoos while rocking a nearly full beard.

Now that's a faux hawk! Levine has great hair for a guy. He has to have hair stans. How could he not?

Levine is so metro and there's nothing wrong with that. He's a handsome guy. He takes care of his eyes and banishes bags and/or dark circles.

Yes, this exists. Even the singer is slightly disturbed by it. It may be inspo, but it is A. Levine in doll form. Moving right along...

A man and his wife, without a shirt, and bloodied tattoos. This was from the M5 "Animals" video, so don't be alarmed.

This concludes our tour of the tattooed torso and arms of the well-coiffed Levine.