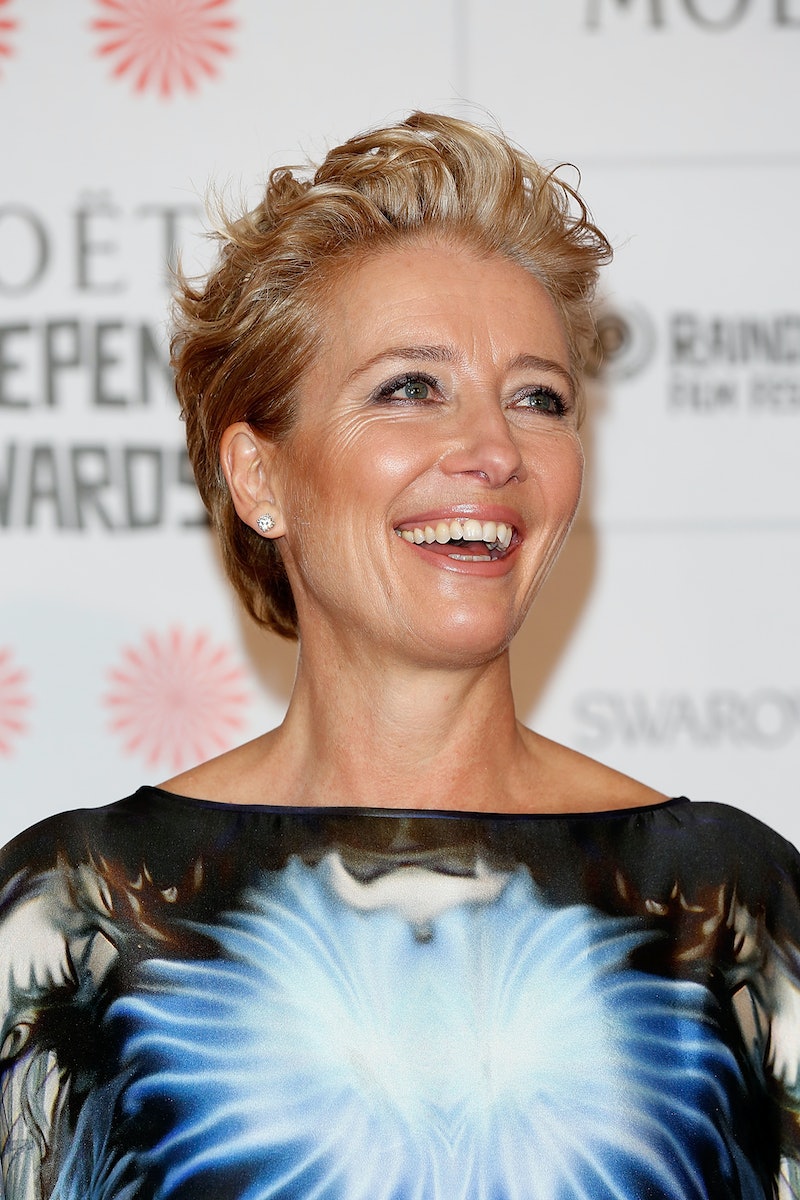 Here we have yet another powerful lady hurling some long-overdue criticism at Hollywood, for the industry's general sexism and double-standards affecting women. In a recent interview with Radio Times, Academy Award-winning actress Emma Thompson said that sexism doesn't just run rampant in the movie industry — it's getting worse. "I don’t think there’s any appreciable improvement," Thompson said. "And I think that for women, the question of how they are supposed to look is worse than it was even when I was young. So no, I am not impressed at all."

In the interview, Thompson came down hard on just how Hollywood treats women over 40 in particular. In her latest role, the 56-year-old actress plays a 77-year-old character in the film The Legend of Barney Thomson. But as Thompson was quick to note, "It would be really nice to get someone who is actually 77 to play her, but it’s a wildly comic role, and I couldn’t resist."

While Thompson's views on any of this getting better for women any time soon seems pretty pessimistic, she shared that when she first began in the business, she was hopeful for change. "When I was younger, I really did think we were on our way to a better world," the actress said. "And when I look at it now, it is in a worse state than I have known it, particularly for women, and I find that very disturbing and sad."

This year, so far, is proving to become the year that issues of ageism and ridiculous beauty standards in Hollywood finally come to the forefront. In addition to Thompson's powerful comments, here are some other noteworthy moments that have brought the conversation into the spotlight — and proved that we still have so much more work to do.

That Amy Poehler & Tina Fey Joke At The Golden Globes

In January, Poehler famously joked on stage about Patricia Arquette's success in Boyhood and the Golden Globes, quipping:

"There are still great roles for women over 40, as long as you get hired when you're under 40."

It's funny because, sadly, it's true.

TV Land's hilariously brilliant show Younger (which stars Hillary Duff, ICYMI) is about a 40-year-old woman who passes herself off as 26 in order to pursue career opportunities. Sadly, society's resentment of older women extends beyond Hollywood roles and this show highlights that still very real issue.

This now-iconic sketch — which stars Tina Fey, Julia Louis-Dreyfus, and Patricia Arquette — brilliantly satirized the rejection of older actresses and was totally on point. In it, Arquette and Fey celebrate Louis-Dreyfus' "last f**kable day" (after which Hollywood will likely never cast her as a sexual being again) with with a mini Viking-style funeral. The piece is filled with hilarious one-liners, like Fey's own candid description of the "last f**kable" phenomenon:

"You know, how Sally Field was Tom Hanks' love interest in Punchline then like 20 minutes later she was his mom in Forest Gump."

Gyllenhaal is 37 — and by most human standards, still considered a young and vibrant person. But as she shared with TheWrap earlier this year, a Hollywood producer told Gyllenhaal she was "too old" to play the love interest... to a 55-year-old man. "It was astonishing to me," she told the mag. "It made me feel bad, and then it made feel angry, and then it made me laugh." Her candid interview served as another powerful example of Hollywood's double standard: men are allowed to get older, but women are not.

And what's more, as actors age, their female love interests keep getting younger and younger, yet no one seems to care. In fact, Vulture published an empirical analysis of Emma Stone, J.Law and Scarlett Johannson's love interests, which showed the Hollywood age gap in a scarily clear way.

Marisa Tomei Cast As Old Aunt May In Spider-Man

At 50, Tomei is still as stunning as she ever was. Yet believe it or not, Tomei was cast as Peter Parker's beloved old aunt in the upcoming Spider-Man movie. Previous actresses to play the role include Sally Field and Rosemary Harris, who were 66 and 75, respectively (to give you an idea of the character's intended age). The casting move was yet another reminder that in Hollywood years, middle-age is somehow considered "senior citizen" old — a real double-whammy when it comes to alienating women over 40.