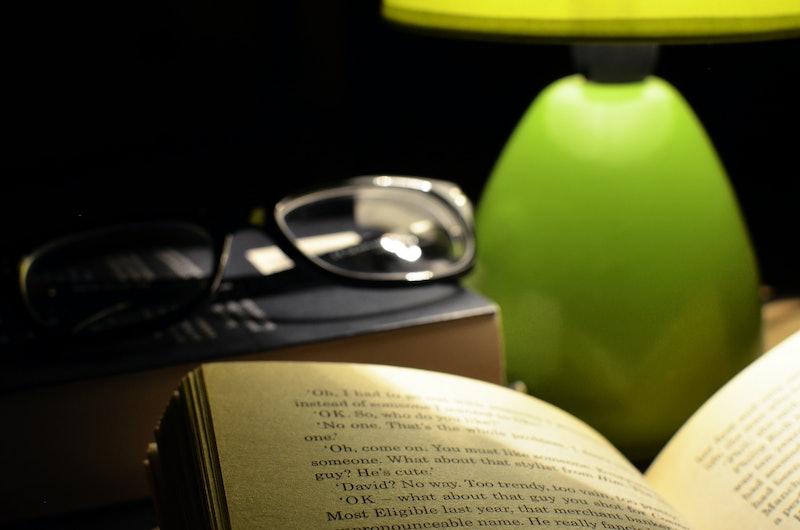 Since the book to read if you're missing Gone Girl this summer isn't Gone Girl's sequel yet, you might be tempted to revisit the original. But please, put down Gone Girl! Yes, I know there are lots of benefits to rereading your fave title, but summer is about grand adventure, trying new things, and discovering your own personal classics. In other words, summer is about reading new books.

For me, summer is also a time to read outside my comfort zone. I set aside literary novels and collections of poems for the big, glossy hardcovers in an attempt to keep my knowledge of the publishing world au courant. So it's not surprising that, come August, my appetite for thrillers goes from dormant to wide awake. When the summer sun is beating down on you at the seashore, only a top-shelf suspense story is going to keep your eyes from closing behind your shades.

That's why I suggest Gone GIrl fans scoot over to the nearest bookstore and pick up a copy of Pretty Is by Maggie Mitchell. With her debut novel, Mitchell, whose short stories have been published in a number of acclaimed literary journals, tells the story of a childhood kidnapping that haunts its two victims into adulthood.

The book is dually narrated by the two kidnapping victims, Carly Mae and Lois. Once 12-year-olds who spent six weeks in an isolated cabin with a mysterious man, the girls have grown up to become somewhat damaged adults. When Lois, a professor who's secretly written a bestselling novel based on her traumatic experience, learns that Carly May, a B-List actress, will play a role in the film adaptation of the book, their paths cross once again.

Call me old-school, but spoilers bother me more with books than with movies, so I won't give away much more about the plot — which is okay, since the real reason to read this book is the writing. Mitchell, especially when she's channeling the Carly May character, arrives at stop-you-in-your-tracks insights about beauty and the power it holds with passages like this one:

Only then can you forgive a girl for being pretty: if she’s an idiot or a liar. There’s no way you can grow up in this world and not be able to look in a mirror and gauge how much you look (or don’t look) like the girls in magazines, or on TV. Even if you somehow manage not to figure it out for yourself—because you’re so terribly modest, or whatever—the world will tell you, just like the world will be sure to let you know you if you’re ugly, or fat, or ridiculous in any way. I don’t mean they’ll come out and say it, necessarily (though someone will, sooner or later), just that people have ways of letting you know. You can see it in the way their eyes react to you, the way they interact with you physically.

The novel, while keeping you glued to your seat, will also have you thinking about how much you value your appearance, and whether that's affecting — or has affected — your life.

Mitchell's depiction of the way women watch other women is eerily accurate and even chilling, as nuanced as Gillian Flynn's portrait of the most meticulous hoodwinking. Here's Lois tracking down Carly May, her fellow captee, after recognizing her in a movie:

I found enough photos of Chloe Savage to confirm what I already half knew. The bios available were disappointingly sketchy, not to mention full of lies. Only one detail linked her to Carly May: competed in beauty pageants as a child, it said. It didn’t say she was Miss PreTeen Nebraska. It said, in fact, that she was from Connecticut. Like me, I thought. She was borrowing that from me. In an obscure way, that, too, counted as evidence.

At once concerned and competitive, the dynamic between these two narrators are nearly as tense as the circumstances that reunite them. For a book about a movie based on a novel, this is one novel that I can't wait to see on the big screen. In the meantime, keep your eye on Maggie Mitchell. She's destined to become a pretty big deal.