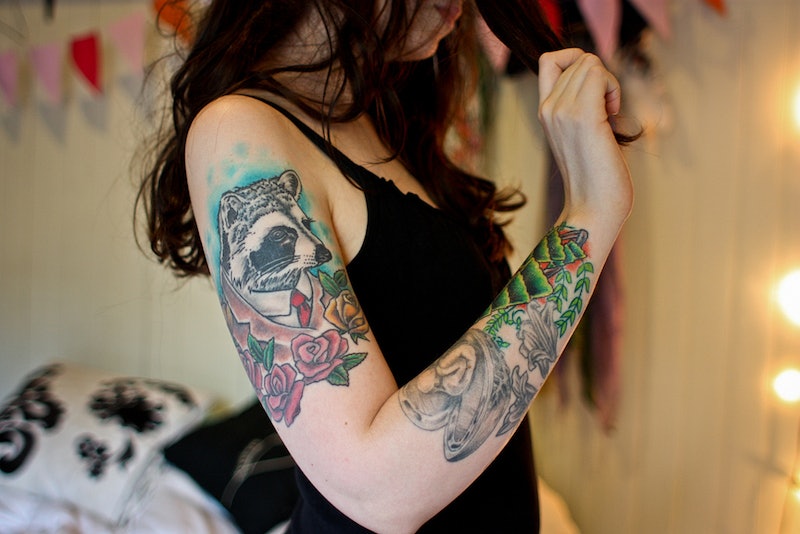 Everyday Feminism Managing Editor Melissa Fabello had no idea she was starting an Internet-wide conversation when she documented strangers' unsolicited comments about her tattoos on Twitter. Fabello didn't even realize how common this problem was until she tweeted about being "tatcalled" 10 times in about 40 minutes at the farmer's market and a ton of people shared similar experiences, as she recently told The Huffington Post.

After witnessing this strong response, Fabello wrote the article "My Tattoos Aren’t an Invitation for Harassment – So Please Stop ‘Tatcalling’ Me," which describes a creepy encounter with a stranger at an airport, who tapped her shoulder and told her “Can you turn a little this way? ... I’m trying to look at your legs.” Many people with tattoos can relate to this incident and are discussing the unwanted attention placed on their own tattoos with the hashtag #tatcalling.

Like any choice of clothing or self-presentation, tattoos are not an invitation to comment on anyone's body. Tattoos are usually meaningful to the people who get them and often have stories behind them, but that doesn't mean they want to share these stories with complete strangers. And it certainly doesn't give anyone the right to ogle people with tattoos.

The backlash to the outcry against tatcalling has been uncannily similar to the backlash against people calling out other types of harassment.

If men can't ask women to come closer and show them their tattoos, how will genuine connections ever form?!

And tattoos are just one example of a visual cue that harassers use as an excuse to bother unsuspecting people. Low-cut shirts and short skirts are other favorites — and here are a few more types of catcalling I've noticed that are less often acknowledged.

Though some might say that catcalling is a product of sexual attraction, many harassers also go out of their way to let people, especially women, know how unattractive they think they are. Whether they're doling out compliments or insults, though, catcalling still stems from the assumption that women's bodies are men's to observe and opine on.

It doesn't matter how cute someone's dog or baby is. It's still rude to touch or play with the living being in question without the parent or owner's permission.

White people seem to have this idea that it's OK to invade people of color's personal space, treat their hair as "exotic," and reach out to touch it. But hey, guess what? It is not OK. So don't do it.

We need a word for catcalling with the purpose of mansplaining. It's that time a guy ran to catch up with me while I was jogging, tapped me on the shoulder so suddenly it make me scream, and demonstrated how I should be moving my arms. It's also that time a guy on the train told me to keep my pencil tip away from my hands because of lead poisoning. I can't be the only one this happens to.

To which I respond, I will do whatever I darn please with my face, and #sorrynotsorry if that's not aesthetically pleasing to you. Stop telling me to smile.

What all these forms of catcalling have in common is that they dehumanize their targets by completely disregarding their personal space. By engaging in these behaviors, you're not complimenting anyone, and you're not doing anyone a favor. So to those who believe they're making some noble gesture through supposedly flattering remarks toward strangers, or comments like "just trying to help": Rest assured that we feel just fine about our bodies, our tattoos, our kids, our pets, our hair, and our faces without you.