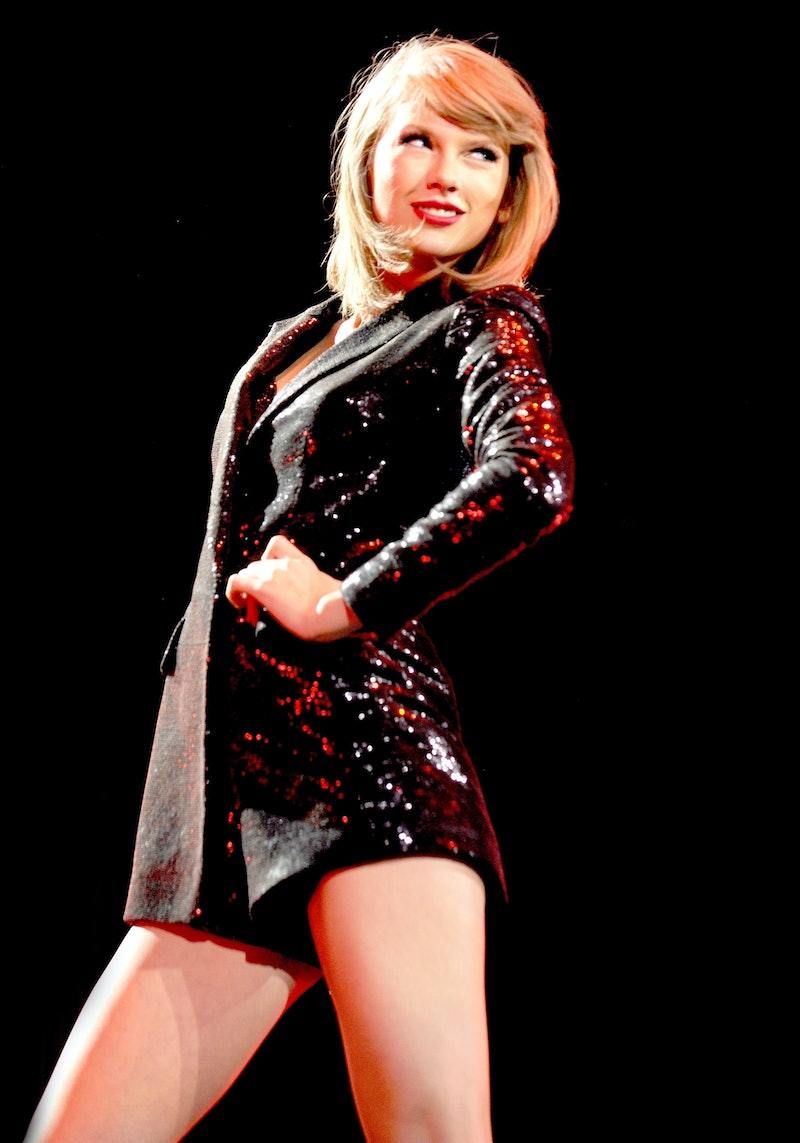 Surprise surprise — Taylor Swift is nominated for a lot of VMAs. And I mean a lot of VMAs. The "Bad Blood" singer pops up in nearly every possible category, and anyone's best guess is that she is going to be carrying a ton of Moon Man trophies home (don't drop any this time, Swift) from this year's ceremony. But besides winning all of the awards, you know T-Swizzle will be rocking an outfit to remember come August 30th.

The VMAs are known for a typically out-there red carpet. From Lady Gaga's meat dress to Miley Cyrus' controversial latex outfit, MTV is basically the best place for artists to experiment with their looks. And since Cyrus herself is hosting the VMAs this year, you are basically guaranteed to spot some crazy outfits, both on the red carpet and on the stage.

Swift herself has never shied away from taking chances on the red carpet over the years, and her timeline of VMA looks demonstrate her transformation from country singer into high-fashion inspiration perfectly. So, in honor of Swift's crazy number of nominations, let's take a walk down memory lane and see her go from sweet Nashville darling to "nightmare dressed like a daydream" on the VMA carpet.

Swift's fairytale entrance and VMA debut was perfectly fitting. Rocking a baby pink strapless dress and her infamous long, curly locks, she definitely made her mark in this homecoming-worthy ensemble.

Ah, what a year of fame will do to you (in the best way possible). Swift's second time at the VMAs was way more daring than the first. She rocked a one-shoulder sequin dress that definitely shows off her tall frame, along with her signature red lip.

Okay, not really a red carpet moment, but Swift's performance outfit at the 2010 VMAs kinda looked like a nude, Old Hollywood version of her 2008 dress. With dark lipstick, a faux lob, and no shoes, this raw look was for sure a crowd-pleaser.

Umm... 1999 Celine Dion called, and she wants her Oscars suit back. Kidding aside, this all-white pantsuit was definitely a risk for Swift, who had typically only rocked gowns and dresses to red carpet events. But her fierce fringe and red lips definitely helped her rock this powerful look.

This navy dress is absolutely stunning, and a typical look for Swift, as she once again gives off Old Hollywood vibes. I mean, the hair, let alone the dress, is simply gorgeous on its own.

Last year was one of Swift's biggest VMA fashion risks yet. This blue patterned romper stood out on the red carpet, and for sure proved that the singer is definitely leaning towards an edgier look these days.

No one knows that Swift will be sporting at the next VMAs but I'm sure it will be as of a winner as the singer herself.