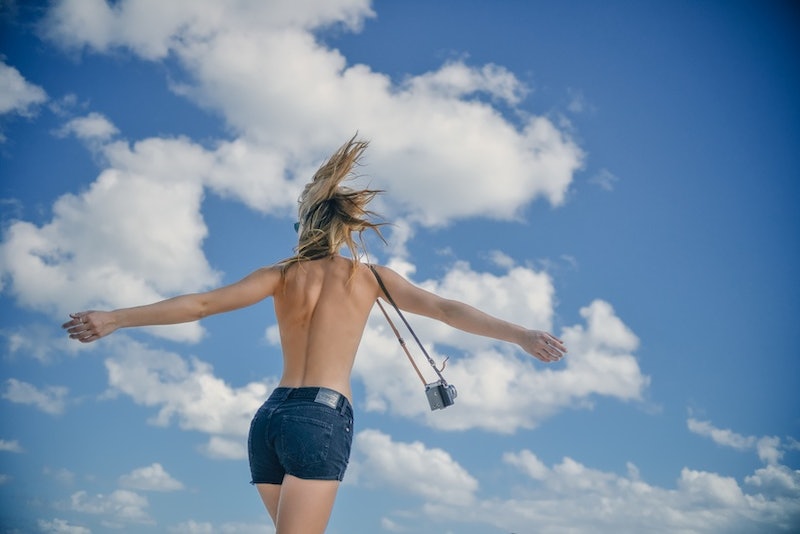 With National Hand Job Day, unlike most holidays, the best part couldn't possibly be celebrating. At least I doubt that. Hand jobs seem like a sex act never done much after their first mention in ninth grade. Am I wrong here? I mean, I respect and support fondling, groping, etc., as forms of foreplay, but how often does the finishing part happen after teen years? Anyway. National Hand Job Day's finest component is its mascot, Tengaman. He's a warrior person in red armor who shoots through the sky! Metaphor? I'll let you decide on that. Anyway, Tengaman is inspiring and all but he doesn't exactly make me feel like masturbating or proposing a hand job...

It's not like National Hand Job Day is the ceiling on specific sex-related holidays. That would be such a waste of days spent being normal and boring and all that trash. No, thank you. Let's review some other sex holidays we really ought to start celebrating:

I like National Shower Together Day for the environmental perks (saving water) and convenience (getting a partner to help shave your neck—hi, sorry all exes of mine). However, when will we understand as a society shower sex sucks? Oy vey.

Although it appears the IFD date varies by year, the next one in 2016 falls on January 15. It's a killer holiday that invites one and all to get their freak on — whatever that freak may be. Three cheers for inclusive, sexy holidays like this one.

Like straight dudes didn't already have enough power, a sad bunch of them launched this holiday which is pretty straight forward. As a vegetarian who doesn't like be told what to do (especially when it comes to genitalia in the mouth area), join me in boycotting next year and every year after. It's vaguely related to benefitting breast cancer (??), but trust there are better ways to give to that cause and raise awareness.

Some speculate proper NLD celebration entails reexamining items you already own to see if they still works. Other suggest just rocking something extra frilly, lacy, or otherwise scandalous. It's meant to be empowering. Cosign on this one, for sure.

So, this holiday truly celebrates the worst sex position ever. (It's 6/9, in case that escaped your notice.)

A holiday that invites you to go forth—commando. Breezy!

You know, a lot of these aren't explicitly sexual, dealing more with nudity than actual sex acts. But that's fine, like...why not? Here's a holiday that suggests you ditch a top and just chill about like that.