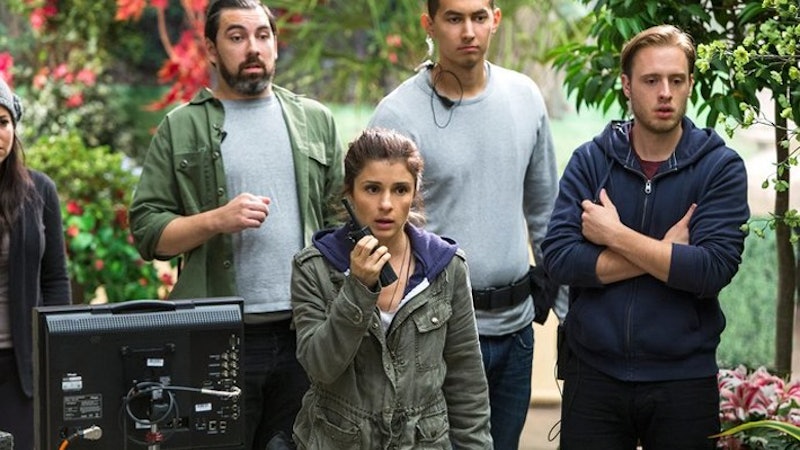 Shiri Appleby is the star of one of the most quietly successful — and my favorite — new shows of the summer: Lifetime's Unreal . The show is a fictional account of working on a Bachelor-esque reality dating program and, unlike most reality TV, the costuming and makeup on Unreal was almost a little bit too normal for the show's costumers. Just when you think you couldn't love the show any more...

In discussion with BuzzFeed, Appleby and one of the show's creators, and inspiration for Appleby's character, Sarah Gertrude Shapiro spilled on how the show utilized wardrobe and makeup to create a realistic representation of a TV producer. "It’s 20 minutes start to finish, hair and makeup both. This is the most myself I think I’ve ever looked on camera. We shoot two episodes at a time, we do one bun — the same thing for the two episodes," said Appleby. Unlike the show after which Unreal's fictional Everlasting is based on, Unreal strives for authenticity — even if that means keeping the main character in the slightest variations of the same outfit all season.

"I’m running around, I’m doing things — if it looks pretty, it looks fake," Abbleby said. "[The crew was] like, 'You should have them change your clothes.' I think the wardrobe department had a hard time understanding that I wanted to look like a normal person, and they didn’t know how to dress that."

Does Appleby miss getting glam for the show when she's running around a set in sneakers and jeans with women who are done up in the extreme? No way in hell.

Appleby's glad for the opportunity to see herself as she truly is and give life to the complex, complicated, "It looks pretty awesome. I feel like I look like myself. Some days, you can see my bags under my eyes more than others. And it feels real for the character. I don’t know, it feels pretty freeing, to be honest with you."

While it's pretty hard to get an accurate handle on reality from reality shows, it's refreshing to see Lifetime take this direction with Unreal. Here's to more women on TV looking less like women on TV and a little less "unreal."