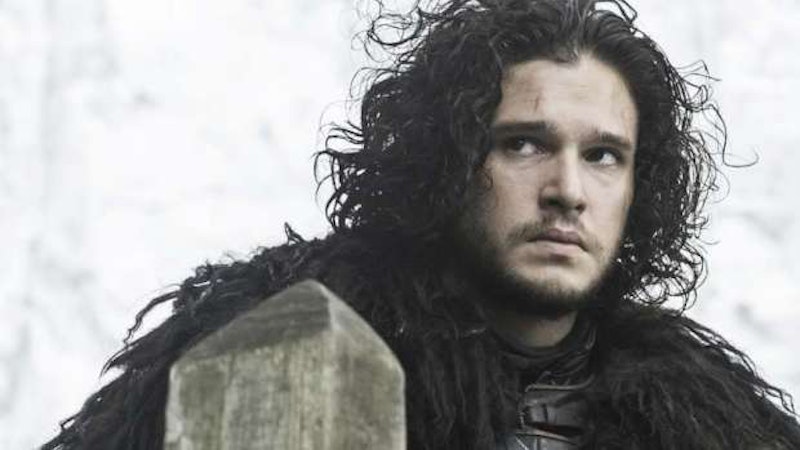 I've been trying to convince everyone for over a month that we haven't seen the last of Jon Snow on Game of Thrones. Yes, I'm aware that we all witnessed him bleed to death in the Season 5 finale after he was stabbed by the Night's Watch and that ungrateful dude Olly. However, that was just way too pitiful an end for the Lord Commander of the Night's Watch, and I'm convinced that there is so much left for Jon to do in the world of Thrones. Though Kit Harington, the actor who plays Jon Snow, has been adamant in numerous interviews about the fact that Jon Snow is no more, I remain unconvinced. First and foremost, Harington has not cut his luscious mane (and everyone knows that his hair is a major component of his contract on the show, so I choose to take it as a hint), and the show still hasn't addressed the issue of Jon's parentage. Though he was raised by the Starks in Winterfell, I — along with many others — do not believe that Ned Stark is actually Jon's father. You know the R+L=J theory? Pretty much fact in my book.

Still, you might say to yourself that hair and theories don't add up to much. As far as we know, Jon isn't a supernatural being, and most humans would be luckily to survive one close range stab wound, let alone several. Perhaps I should amend my earlier statement by saying that Jon Snow might have died on the ground at Castle Black — but that doesn't mean that he will remain that way. We've already seen that in the world of Westeros, death is not always final. Worshipers of the Lord of Light are known to have more than one life and the White Walkers are certainly skilled in raising the dead. There is even the well publicized fact that Kit Harington's contract for Game of Thrones has been renewed through Season 7.

Still unconvinced? Well, lucky you — here is actual proof that Jon will return. Game of Thrones community site Watchers of the Wall posted this gem on Twitter Tuesday:

Now, there could be several explanations for Harington's presence in Belfast. Perhaps he's involved in some kind of flashback next season — those have been utilized on the show before, specifically the episode we got to see a young Cersei Lannister. It also may be that Harington's presence might have nothing to do with Game of Thrones at all — maybe he just missed his friends from the show, and wanted to hang out with them for a bit.

Still, none of this seems like the real reason for the Lord Commander to be in the same place where GoT exteriors are shot.

There has been a lot of deaths on Game of Thrones since it first premiered However, I just can't believe that Jon Snow is going to add to this death toll. Unfortunately, we have to wait until next spring to see what happens on the show, or at least until George R. R. Martin's Winds of Winter is released. Until then, Harington's delicious man-bun and his presence in Ireland should be all the proof you need.