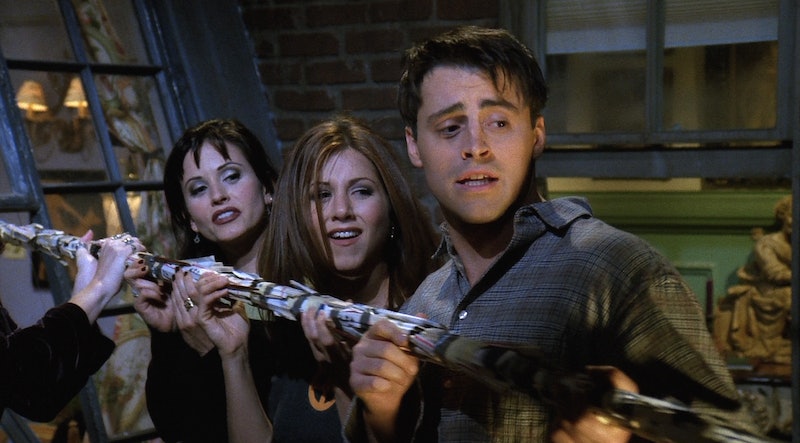 Have you ever wondered what would happen if our favorite Friends characters were real people? Friends' season finale aired 11 years ago, but sometimes I think about Chandler Bing and how he might be working on a standup routine or Monica Geller starting her own Food & DIY blog. Clearly I have a lot of time on my hands, but if our favorite Friends characters were real people, they would also be on social media by now. Pretty much every single person on Facebook commits a faux pas and I am convinced the Friends characters would be no different. The question here is what kind of online faux pas would they commit?

I don’t want to call anyone out here, but pretty much everyone on Facebook does something super annoying, whether it be a parent posting too many pictures of his or her children or the girl who’s in a relationship with her soulmate #blessed #superblessed. Bleck. Also, since I'm single and childless I will include the person who brags constantly about their fabulous I-don’t-need-love-I-have-an-awesome-job life (guilty). My point being is that everyone says and does annoying things on Facebook. And here's how the Friends would fit that mold.

Just like in the show, Ross probably whines about his entire life via Facebook. He is definitely the person who posts cryptic messages about how terrible his life is, but won't elaborate on them. Ross will basically just wait around for people to sympathize with him.

First of all, Rachel Green probably brings all of her Ross drama onto Facebook. She is first and foremost the person who is constantly changing her relationship status and airing her dirty laundry for her online friends to see. However, she is also the parent that is constantly updating her friend list on every move her daughter Emma makes. We all have friends like this.

There's always one friend on the list who is constantly posting why it's important to eat non-processed foods, or bumming everyone out with sad videos of puppies at the pound. Basically, Pheebs would bombard your wall with causes to join and she would probably invite you to a million pages and events to eat healthy.

Joey Tribbiani: The Gullible One

You know that endearingly gullible person you're friends with who doesn't understand satire articles? Joey Tribbiani would be one of them. He is the guy posting Onion articles because he thinks they are real. He's really terrible at deciphering the truth from the Internet, so you're likely getting a ton of spam and things that say "YOU WILL NEVER BELIEVE THIS POST!" Only you will, because it's not real.

Is that another joke? Yes, Chandler Bing jokes are funny, but Chandler is the guy who only posts jokes and gets very upset when the jokes do not obtain enough likes and comments. You have someone like this on your friend list too and while that person is not the most annoying person in the world and they're usually pretty funny, sometimes the jokes can fall flat... very flat.

This might have been pretty obvious, but Monica is all about the food photos 100 percent of the time, especially when it's pictures of her own food. Even though all of her foodie photos look professional, she expects her friends to reinforce the fact that she's the best chef ever. (Make sure not to criticize her chicken!) Besides her staple food posts, you can always expect some type of Pinterest DIY-type project out of Monica's page.

Of course, even with all of these faux pas, I'd still be pretty stoked to find the Friends on Facebook. If only in my dreams.