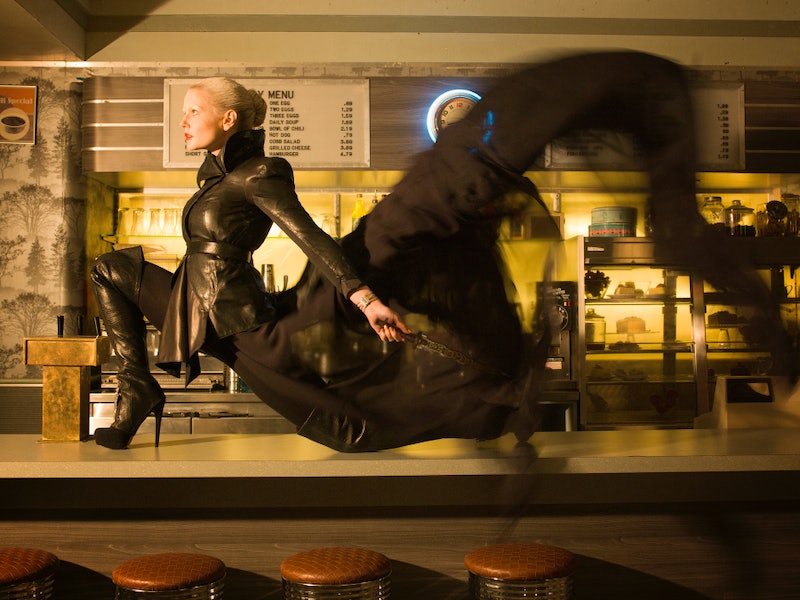 On a scale of 1 to 10, I'm probably at about an 8 when it comes to my excitement level for the Dark Swan storyline coming up this fall on Once Upon A Time Season 5. I'm only at an 8 because I'm approaching the situation with minor trepidation. It's clear that Emma will give into the seductiveness of evil that comes with being the Dark One, but it's a fine line to tread given that we'll still need to eventually restore the Savior to her former self. Given her status as the product of True Love and the holder of light magic, she's already a step ahead in the fight against the Darkness, but just how far will Emma be allowed to go into that Darkness, and what effects will it have on her when she finally emerges?

It's not that I'm necessarily worried about Emma's ability to redeem herself once her stint as the Dark One is over. After all, if Regina can cast the dark curse and kill and torture hundreds of people and still come out the other side as one of the most beloved characters on the show and a changed woman, there's hope for Emma, indeed. But redemption is hard-wrought and character assassination is all too easy if the Dark Swan arc isn't played with great care and yes, great restraint.

Jennifer Morrison has done little to assuage my fears, telling Entertainment Weekly that for Emma, there's "a lightness, in a sense, in her darkness, because she doesn’t have to do the right thing and she doesn’t have to try to be the stronger, better person all the time. There’s a little bit of freedom in that that is really fun." Ah! I mean, in a way, I do think it'll be fun, both for Morrison to play and for the audience to watch. But that's only if it stops before going too far — and the question is, of course, how far is too far, anyway, and who gets to decide? Thankfully, I trust Morrison and her love for (and knowledge of) Emma enough to just take a deep breath and try not to be too concerned about what's going to go down come September 27.

These things should all go without saying, but while we're letting Dark Swan reign, let's avoid these terrible acts, which would likely completely destroy Emma's character and everything we've come to know about what makes her who she is: the Savior.

I said these things should go without saying, right? Regardless of how powerful the Darkness may be, in no circumstances would it (or should it) ever prompt Emma to hurt Henry. Of course, there's every chance that this could happen accidentally, when her evil is focused on someone/something else and he gets caught in the crossfire, but we've been there, done that before and it would be devastating both to Emma, and to the audience to watch. Leave it alone.

Turning Regina Into Her Nemesis Again

Emma and Regina have come so far over the years, going from mortal enemies to the role of one another's most trusted friend. No one understands and accepts Emma like Regina, and vice versa, and the journey that these women have shared is a major crux of the show at this point. After all, Emma tethered the Darkness to herself for Regina's sake, which goes to show just how important their relationship has become. While I'd love to see a magical duel between the two, and while it makes sense that Emma would fight Regina as Regina fights to save her, these should be short-term setbacks that serve to strengthen their bond at the end of the day.

Killing Anyone In Storybrooke

I mean, I know killing anyone isn't a good thing, but at least that prison guard was a stranger (and also, that was just promotional footage and likely isn't a real part of any episode). That being said, if Emma does get the murderous urge, let's keep them away from the familiar faces of Storybrooke, because crushing the hearts of anyone she knows and cares about, and anyone who cares about her, would be heartbreaking and I don't know if Emma would ever get over that, once she realized the weight of what she'd done.

It's probably safe to assume that at some point, Rumple will wake up from his magical coma, and given that he's been the Dark One for the past several centuries, he probably has some advice he'd love to bestow upon Emma. Obviously, this is a terrible idea, because Rumple was the worst Dark One ever and nearly lost his life because of how evil he became. I doubt Dark Swan would seek him out anyway, but let's just keep Rumple from interfering with this terrible situation and making it even worse, if we can.

Making Her A Magical Genius

I know that being the Dark One comes with great power and now Emma can rip out hearts and poof herself places and all that, but let's not forget that Emma is an adorable goofball and kind of a klutz when it comes to managing her magic. She got some useful lessons from Regina, but they were far from complete, and it takes years to be able to properly hone magic and become adept at practicing it. There's great potential in keeping this element of Emma's personality and could provide a bit of levity during the darker moments if she messed up in little ways and didn't quite do a spell properly or something.