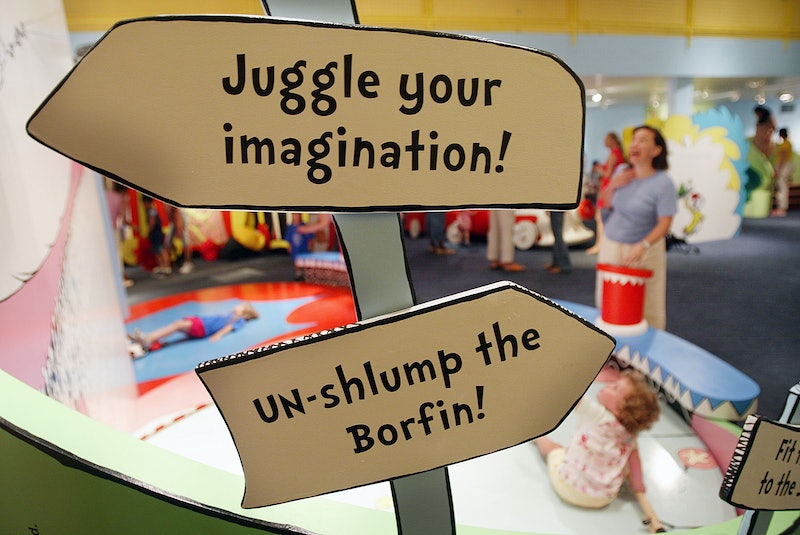 On Tuesday, Random House will be releasing What Pet Should I Get?, the latest children's book in the beloved many-volumed Dr. Seuss collection. Writer and illustrator Theodor Seuss Geisel, the rhyming genius whose books we all loved and learned from, died in 1991 — which means that the manuscript for What Pet Should I Get? isn't brand new. So, how was the new Dr. Seuss book found? In a box, of course... just not the same box where fox stored his socks, nor the one where Sam-I-Am refused to eat green eggs and ham.

According to the New York Times, after Geisel's death, the writer's widow, Audrey Geisel, donated many of her husband's early drafts and illustrations to the University of California. She put everything else into a box, which was tucked away, not to be opened again until October 2013. There, beneath assorted flashcards, unfinished sketches, and a collection of unpublished drawings filed under the buoyant listing "Noble Failures," (don't we all have a few of those) she discovered a completed project, titled "The Pet Shop."

Those unexpectedly discovered pages have become Dr. Seuss Enterprises' latest title, What Pet Should I Get?. The book will have a first print run of 1 million copies.

Geisel himself published 44 children's books during his lifetime, making What Pet Should I Get? number 45 in a collection that has sold more than 650 million copies worldwide. The first Dr. Seuss book, the little-known And to Think That I Saw It on Mulberry Street, was published in 1937, and was followed by unforgetable titles like The Cat in the Hat (1957) and Green Eggs and Ham (1960).

Earlier this week, The New York Times ran a lively review of the book, with reviewer Michiko Kakutani offering a nod to the writing style of the great Seuss himself. She wrote:

Seuss never spoke down to his readers, no matter how small.His tales were told with vim, vigor and zest.“What Pet Should I Get?” entertains us just fine.Who cares if this book’s not really his best?

What Pet Should I Get? will hit shelves July 28. I'll be in line for a copy — and I have a feeling I won't be the only one.