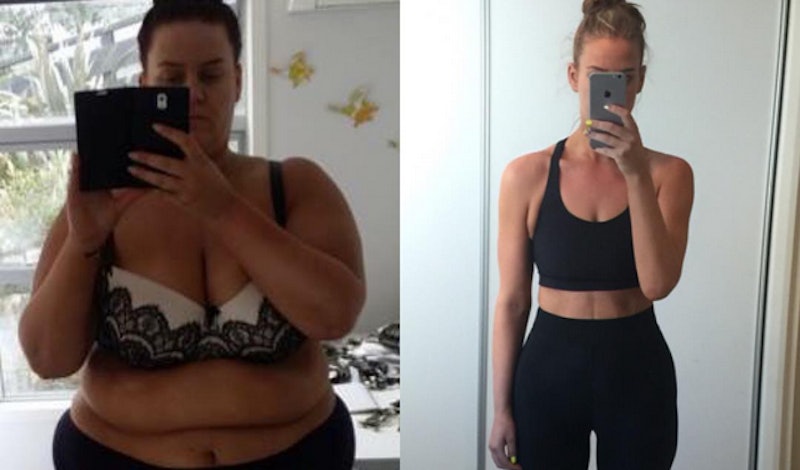 Typically, when someone posts a before-and-after photo of their weight loss, they're flooded with congratulations and goodwill. Unfortunately, that wasn't the case for Simone Pretscherer. When the freelance stylist Instagrammed a before-and-after photo of her efforts to get fit, which was achieved through changing her eating habits and implementing a rigorous exercise regimen, she found herself being trolled for being too fit. There's just no winning, is there?

While most of the comments on the post were positive, some expressed their disbelief that Pretscherer was the subject of both pictures. According to the Independent, these trolls claimed that her different hair color and lack of visible excess skin were indications that she had faked the "after" photos, because they're clearly not familiar with the concepts of hair dye and clothing. (Is this evidence that trolls are aliens sent from another planet to ruin humans' lives in the most obnoxious way possible? Yes. Yes it is.)

Instead of ignoring the trolls, as many are wont to do when they unexpectedly become the target of the Internet's often undeserved ire, Pretscherer chose to face them head-on by uploading the same before-and-after post, with one crucial difference: She added a third picture in which she pulled down the top of the high-waisted yoga pants she had worn in the original Instagram post, and completed the post with a caption explicitly addressing every "concern" the haters had.

"[Y]es my hair and eyebrows are a different colour as I'm going back to blonde, yes I have changed my phone from Samsung to apple and have moved house so the background has changed... yes I have lose skin and stretch marks but I don't feel the need to show them in every single photo I post online," she wrote. At the end of the post, she concludes with a triumphant "GO ME."

Pretscherer is looking to have surgery to remove her excess skin, but until then, she is clearly committed to owning her body the way it is.

The fact that her confidence is so newsworthy, however, points to a problem in how we treat fitness as a whole. If you're overweight, you're expected to get "in shape" — aka lose weight, even if you're perfectly healthy in your current state — as soon as possible. In fact, it's preferable for said weight loss to occur as quickly as possible, because losing 100 pounds in less than a year makes for much better social media posts. However, it's well-documented that rapid or significant weight loss causes loose skin. According to Women's Health, many factors go into how much excess skin you end up with, but "once skin has been stretched, there aren't any workout moves that can tighten it."

Despite its prevalence, loose skin is the one aspect of weight loss that hasn't been scrutinized to death. Recently, fitness bloggers like John David Glaude and Kaitlyn Smith have begun openly discussing their excess skin, but it's still by and large swept under the rug. In fact, a controversy errupted last year after Shape magazine allegedly refused to publish blogger Brooke Birmingham's weight loss photo after soliciting one in the first place, simply because her two-piece bathing suit showed the loose skin on her stomach. Shape maintained that the incident was "a result of a misunderstanding with a freelance writer," noting that "this does not represent Shape's editorial values ... Shape prides itself on empowering and celebrating women like Brooke, and any indication that we would not run the piece with the photo provided was wrong, as we would have been proud to share her inspirational story."

Shape also pledged in May of 2014 to feature Birmingham and five other real women in their print publication to "start a larger discussion about what happens when you lose a significant amount of weight."

But on the other end of the spectrum, we have Pretscherer's Instagram post, which makes it clear that it's possible to get shamed for not having loose skin as well. It's a catch-22: If you don't lose weight, you're seen as weak-willed, but if you do, you're expected to have a perfect body immediately. That perfect body, however, has to have at least a few imperfections, or else nobody will believe you put in the work to lose weight, which brings us back to the weak-willed perception.

So far, the only way to get rid of loose skin is through surgery, which can cost thousands of dollars, but I'd like to put forth a second option. How about we just stop shaming people for loose skin in the first place? And while we're at it, why don't we stop body shaming entirely? It's not hard. In fact, there's just one step: Minding our own business.