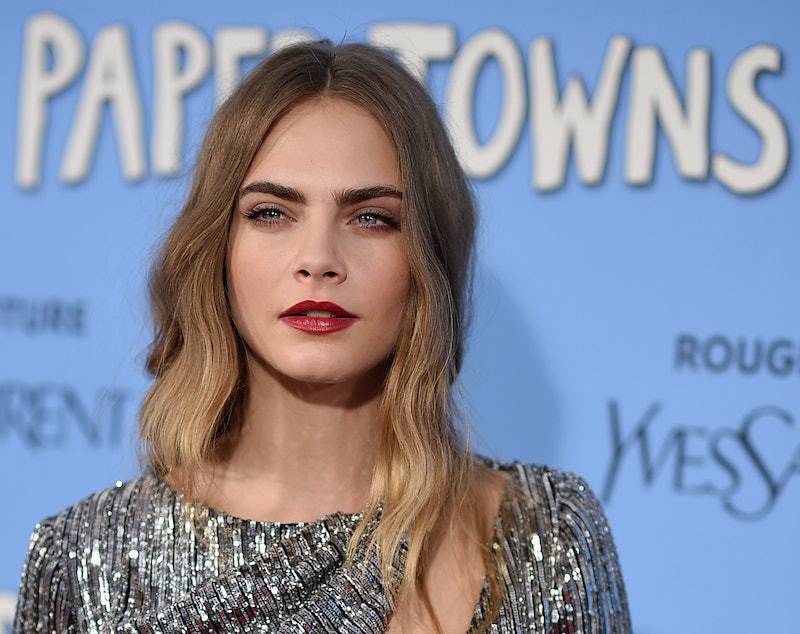 Have you been following Paper Towns' press tour? With supermodel-turned-actress Cara Delevingne at the helm, you can bet it's been pretty darn fabulous. She's strutted red carpets across the world, looking various degrees of to-die-for at every turn. There were the Taylor Swift-esque printed separates she wore in Madrid, followed promptly by neon Mary Katrantzou in Berlin, fetchingly retro Jenny Packham in Paris, military-inspired, star-printed Saint Laurent in London — and that's just Europe!

She jumped continents to Australia to continue the parade of chic looks in mermaid-adjacent Dion Lee, and headed around the world to Los Angeles stun in Saint Laurent and Alexandre Vauthier (and to catch a quick dance with Kylie Jenner, of course). Now, finally, as the film prepares to open on July 23rd, she flew out to New York for a sparkly, St. Laurent-ian victory lap.

And better yet, now she's called in the reinforcements — a few of her current/former Victoria's Secret Angels walked the red carpet, along with her co-stars from the film, Jaz Sinclair and Halston Sage. Also, her sister, Poppy Delevingne, and her girlfriend, St. Vincent, came out to stylishly support the film How sweet is that? It was quite the grand finale to a supremely well-dressed press tour — so let's take a look!

One of her best looks ever? Quite possibly.

Sinclair went for a simultaneously soft-focus and high-drama look in beige Blumarine.

Like her co-star, Sage went for a '70s-esque neckline — this time courtesy of a gorgeously Grecian Miu Miu confection.

Delevingne waxed poetic about her cooler-than-cool girlfriend to People, saying, "True love comes in every form, whether it's what you do, whether you love yourself... true love is one of the most important things... it's what makes the world go round." Aww!

Kloss kept things simple — but even in a beige dress paired with equally beige pumps, she looked anything but basic.

Smalls' ensemble had a satisfyingly electric feel to it.

The popular designer was dressed to ladylike perfection in a lovely dress of her own creation.

Now, I'm not saying this was a model-off or anything, but still — everyone seriously brought their A-game. Whose outfit do you like best? Are you a fan of Halston's art deco-y Miu Miu? Poppy's high-impact roses? Cara's disco ball-worthy sequins? It's definitely a tough call.