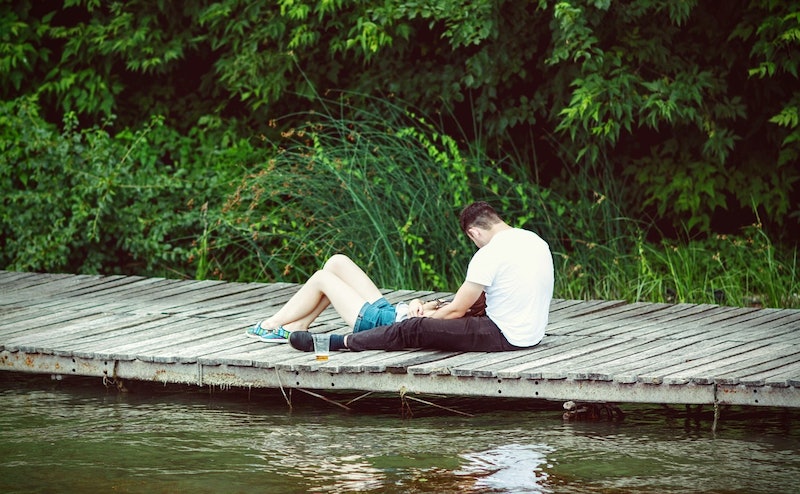 A study from earlier this year about how couples are more likely to divorce when wives get sick has been officially retracted. The study that was published in the Journal of Health and Social Behavior back in March stated that when the mental or physical health of a woman declines in her elder years, divorce is far more likely than if the husband were to get sick. As Bustle reported back in March, it does make one question if this is just proof that husband sucks, but I guess we need to take that back. Well, sort of take it back.

According the retraction, the error was discovered when lead author, Amelia Karraker, received an email from her colleagues who were trying the same study, but found that their numbers didn’t match up with that of Karraker and her team. As Karraker explained in her retraction:

“I sent them the statistical analysis file, which documents all of the steps as to how we came to all the estimates in the paper. And they pointed out to us, to our horror, that we had miscoded the dependent variable…As soon as we realized we made the mistake, we contacted the editor and told him what was happening, and said we made a mistake, we accept responsibility for it.”

In fact, what the research did find was that not all illnesses in wives lead to divorce, but that heart problems are actually what can seal the deal in divorce. Either way, mistakes aside, it’s still a pretty depressing fact.

But wives who develop heart problems aren’t the only things that can lead to the demise of a marriage. Here are nine other factors that can have a couple heading to divorce court.

Yes, you read that correctly.

According to a 2012 study entitled “Equality in the Home,” couples who equally divvy up household chores have a 50 percent higher chance of divorcing than marriages where the wife did the majority of the housework. The reason? In “modern” couples, where housework is more likely to be shared, the wife is far less dependent upon her husband thanks to education and her job, so if something goes awry in the relationship, she doesn’t need to stick it out, as was the case in generations past.

While it may seem like having a little bundle of joy would bring a couple even closer together, it actually rips them apart. A 2013 study found that stress and sleepless nights after having a baby contributed to a third of divorces. If that’s not depressing enough, a 2003 study found that parents of a baby girl are five percent more likely to call it quits than parents of a boy.

Although, it should be noted that in 2010 that statistic was attributed to the fact that mothers of daughters who are in unhappy marriages are more willingly to leave so as to set a good example for their daughters, as opposed to just the random fact that having a baby girl dooms a marriage.

Whether it’s because of infidelity or simply just not wanting to give their marriage their all, a study by Utah State found 73 percent of divorced couples cite lack of commitment as a reason for their spit. Over 60 percent of those divorced people blamed their spouses for not trying harder.

Now before your brain immediately goes to Ashley Madison, because it feels natural that we should blame them for such a thing, in this instance of “online cheating,” we need to put emphasis on the word “online.”

Research from law firm McKinley Irvin earlier this year found that a third of divorces could be blamed on online affairs, as in there’s no touching, kissing, and sexing going on. But what I guess enrages a partner enough to want to divorce someone over something like this is that most men, at 54 percent, don’t even considering online cheating as cheating at all.

In contrast to how having a baby can lead to divorce, when babies grow up and fly the nest divorce can also be in the cards. In 2009, more than 600,000 couples over 50 filed for divorce and 2013 was the first time in history that more adults over 50 were divorced than still married or widowed.

According to a 2011 study by the Center for Disease Control, 59 percent of teenage marriages (under 18) end in divorce within the 15 years after the big day. But if 59 percent is startling enough, 60 percent of couples who marry between 20 and 25 end up divorcing eventually, too.

Damn Facebook! Always messing with people’s relationships and making you feel bad that you’re not at a beach somewhere like so-and-so over there! But in addition to making you hate the fact that you never go anywhere, divorce attorneys have seen a rise in Facebook related divorces in the past few years.

According to a law firm in the UK, Facebook played a part in a third of all divorces and a law firm in Tampa Bay says “30 to 40 percent of the cases have some sort of Facebook involvement.”

For the majority of couple who divorce, arguing all the time is the number one reason for their split. As the Utah State survey found, 56 percent of couples divorce because they just can’t stop arguing. I’m not talking about healthy disagreements, but full-on yelling matches on a regular basis.

Well, if online cheating accounts for a third of divorces, then naturally legit cheating, as in physically engaging with someone outside a marriage as opposed to just being dirty through the Interwebz will lead to divorce. Not far behind arguing as a reason couples divorce, is cheating, with 55 percent of couples ending their relationship over infidelity.