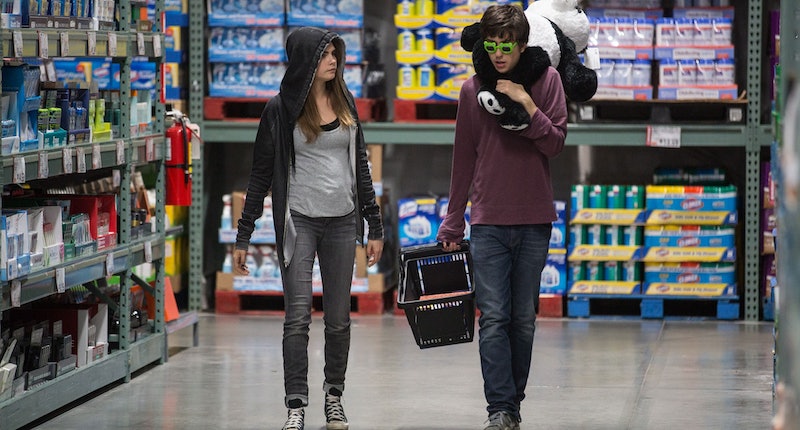 When most people think of John Green, "hilarious guy" is probably not what comes to mind. The YA author is best known for producing heartbreaking works of literature about things like cancer and grief that are more likely to leave their readers sobbing, not cracking up. Yet what many forget is that when he's not making you cry, Green actually has a great sense of humor. Despite their dark subject matters, Green's books are filled with witty lines and scenes that will make even the most teary-eyed readers burst out laughing — especially Paper Towns, his 2008 novel. Paper Towns ' many funny quotes are worth reading and enjoying over and over, especially in anticipation of the book's upcoming adaptation.

Whether it's a piece of conversation between Q and his friends or a line said by Margo that makes everyone think twice, Paper Towns has endless quotable moments that are relevant to any mood or situation. Yet it's the funny ones that stand out in my mind the most, because when a book is about a teenage girl's disappearance, you need a little humor to lighten things up. Below, 12 of the funniest quotes from Paper Towns:

1. “Talking To A Drunk Person Was Like Talking To An Extremely Happy, Severely Brain-Damaged Three-Year-Old.”

So funny, and so accurate.

Said every person ever before doing something insanely stupid/ridiculous/absolutely insane.

3. "Peeing Is Like A Good Book In That It Is Very, Very Hard To Stop Once You Start.”

If you don't know the context for this line, it makes it even funnier.

4. "IT IS NOT MY FAULT THAT MY PARENTS OWN THE WORLD'S LARGEST COLLECTION OF BLACK SANTAS.”

It may not have been Radar's fault, but that doesn't mean it's any less hilarious.

5. "Those Of Us Who Frequent The Band Room Have Long Suspected That Becca Maintains Her Lovely Figure By Eating Nothing But The Souls Of Kittens And The Dreams Of Impoverished Children.”

6. “Chuck Parson Did Not Participate In Organized Sports, Because To Do So Would Distract From His Larger Goal Of His Life: To One Day Be Convicted Of Murder.”

7. "'The Last time I Was This Scared,' Radar Says, 'I Actually Had To Face A Dark Lord In Order To Make The world Safe For Wizards.'”

Now all I want is a John Green-J.K. Rowling crossover.

8. “Your Party Kicked So Much Ass! Even Though You Suck So Much! It's Like, Instead Of Blood, Your Heart Pumps Liquid Suck! But Thanks For The Beer!”

Exactly what you should say to someone after going to their party, right?

9. "You Can Learn A Lot About Government From Donkey Balls.”

10. “Ben Starling, You Better Not Have Bought Your Token Black Friend A Racist Shirt."

The guys' buying a Confederate Flag shirt was an accident, but a very funny one. Especially with this follow-up:

11. "I'd Like To See How The Cop Responds To A Black Man Wearing A Confederate T-shirt Over A Black Dress.”

12. “It's a penis," Margo said, "in the same sense that Rhode Island is a state: it may have an illustrious history, but it sure isn't big.”

Sorry, Rhode Island, but you have to admit, it is funny.