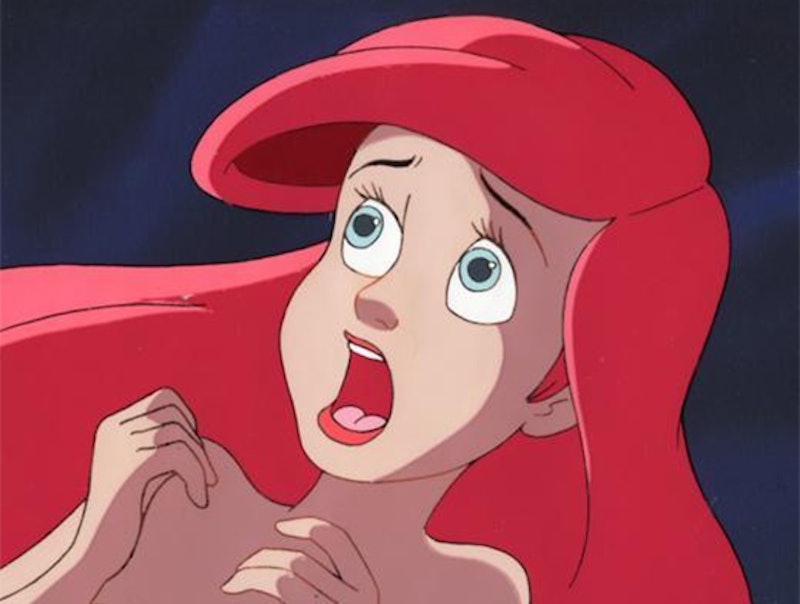 If you spent your childhood obsessed with Disney (or if you've spent 15 minutes of your life on the Internet), you've heard the rumors about the alleged dirty stuff hidden in Disney cartoons. The puff of dust that seems to spell out "sex" in the sky during The Lion King? The bishop's supposed erect penis in The Little Mermaid? The other supposed erect penis (hidden in the design of King Triton's castle) in The Little Mermaid? In an era in which every other film-related urban legend seems to have been easily debunked (rest in peace, ghost-who-was-actually-just-a-cardboard-cutout-of-Ted-Danson in Three Men and a Baby), the stories about sexy stuff inserted into Disney films still endure. Possibly because they're a little more subtle than other film-related urban myths, possibly because we're all aware of the fact that there occasionally are actual raunchy sex jokes in Disney films, and possibly because we all just really, really like the idea of pissed-off animators taking vengeance on their bosses with nothing but their pen and their ability to draw a convincing dinglehopper.

So what's the truth? Was your childhood ruined by secret penis-drawing maniacs? Or do we just hold on to these rumors because we have yet to figure out another way to make the company pay for Treasure Planet? We'll break down six famous examples of the supposed R-rated moments in Disney animated films, and allow you to make up your own mind.

1. Dust That Spells "Sex" In The Lion King

The Rumor: When Simba flops on the edge of cliff, the dust that rises around him into the night sky supposedly spells out "sex." The film was released in 1994, but the scene didn't become controversial until 1995, when a religious group called the American Life League mentioned the scene in their newsletter as an example of Disney's tendency to hide inappropriate sexual content in their films.

The Explanation: In an interview with The Huffington Post, former Disney animator Tom Sito claimed that the dust was supposed to spell "SFX." It was a hidden nod to the film's special effects production team, not a hidden nod to what happens between two consenting adult lions.

The Consensus: The debate continues to rage on, 20 years later. Personally, I think you have to have a very vivid imagination, a political agenda, or a medical marijuana license in order to see any words at all in that cloud of dust.

2. The Bishop With An Erection In The Little Mermaid

The Rumor: Supposedly, a quick shot of the bishop who officiates the marriage between Eric and the disguised Ursula reveals that he has a serious piece of coral in his pants (yet another sign that this union really was doomed from the outset). Again, The Little Mermaid was released in 1989, but no one brought up the bishop's possibly excited state until that same 1995 American Life League newsletter mentioned above. So I guess in the days before Reddit, you had to subscribe to fringe religious newsletters in order to get comprehensive lists of all the things in movies that look like boners, huh?

The Explanation: It's just his knee! Disney has been adamant that the alleged little boner is simply one of the bishop's comically knobby knees.

The Consensus: In 2009, Disney digitally altered the boner/knee on their new DVD release of The Little Mermaid . Is it a move aimed at silencing a pointless and silly argument? Or a quiet admission of guilt? Almost definitely the former (but seriously, get it together, knee animators).

3. The Boner Castle On The Cover Of The Little Mermaid Video Cassette

The Rumor: Among the many towers of the extremely phallic castle used in promotional materials for the film and as the cover of the original Little Mermaid VHS box, one is supposedly drawn to look like an actual erect penis. The alleged anatomically correct image was brought to public attention in 1990 by a woman named Michelle Couch, who filed a complaint about the cover with the Arizona supermarket chain Bashas.

The Explanation: According to urban-myth-debunking site Snopes — which claimed have interviewed the artist who drew the castle, who remained anonymous — a busy work schedule was responsible for the castle's phallic design, and it was not intentional. So let that be a lesson to all you bosses out there: Make sure to give all your employees adequate time to pause, relax, and ask themselves "Does that castle I just drew to help advertise a children's movie look at all like a very intricate marital aid?"

The Consensus: Disney altered the cover of the video after the uproar, so all DVD copies of the movie don't have the allegedly offensive artwork. As someone who purchased the VHS copy of The Little Mermaid the day it was released and spent hours staring at the cover, dreaming of being a freewheeling teen mermaid who got to swim around in her underwear all day, I'll say that I never noticed it. But also, my job as an adult is writing about cartoon boners, so maybe it had more subliminal influence on me than I noticed.

The Rumor: Aladdin supposedly says, "Good teenagers, take off your clothes" as he is menaced by a tiger (you know, as one does).

The Explanation: The script for the scene is said to actually read, "Good kitty, take off and go." Sito also claimed in the Huffington Post that the animators who worked on this scene were not the secretly randy type, and that any sex jokes are purely coincidental

The Consensus: Oh, come on. This was the "Starbucks lovers" of its day. Disgruntled animators are one thing to believe — thousands work on a film this big, and sure, maybe one of them could go rogue and decide that this movie needed to up the sex factor. But voice actors? There are only a handful involved in any animated film. And the odds that any of them would jeopardize that plum gig with incoherent human-on-tiger sex mumbling is minimal.

5. A Cartoon Flash In Who Framed Roger Rabbit

The Rumor: Jessica Rabbit — the bosomy animated redhead who really set the stage for our public obsession with Christina Hendricks, if you think about it — falls out of a car, allegedly flashing viewers with a crotch shot too brief for anyone to catch at regular speed. But when the 1989 film was released on LaserDisc in 1994 (and thus could be examined frame by frame), the supposed flash became a hot media story, with Variety and CNN covering the sudden demand for the disc created by all this crotch talk. Again, this was what people had to resort to back before we had access to free Internet pornography. Appreciate the present, reader. You're really living in a golden age.

The Explanation: Unnamed Disney executives blew off the rumor in the 1994 Variety coverage, and while Disney never offered a definitive statement as to what happened, these (possibly NSFW? I can't even tell anymore) screen shots of Jessica's fall from the car make a fairly convincing argument for, at the very least, a poorly thought-out coloring mix-up when it came to animating the area under her dress.

The Consensus: There's plenty of actual adult humor in Who Framed Roger Rabbit, which is honestly not really a movie for kids, no matter what the many toy tie-ins would lead you to believe. So while there may never be clear consensus on this rumor, a flash of cartoon junk would not be totally our of character in this film.

But by the same token, what we think we see in situations like this is usually more a reflection on the viewer than the creator. For example, there's a dog park near my house with public art sculptures that I think really, really look like butt plugs. But is that an issue that the sculptor must answer for? Or an issue I must deal with on my own, as I grapple with what a pervazoid I am? I'll let you know definitively after I bring it up at my next community board meeting, but I am pretty sure that it's the latter.

6. Boobs In The Rescuers

The Rumor: In one frame of The Rescuers, there is a real photograph of actual topless human lady.

The Explanation: For once, the Disney sex rumors are totally true! In 1999, The Rescuers won the honor of being the first video to ever be removed from shelves for containing an objectionable image, when 3.4 million home copies of the 1977 film were recalled by Disney due to two frames of the film, which featured a photograph of a woman with bare breasts (the shot can be seen in this NSFW video). The Rescuers boobs is the only one of these Disney sex myths to ever be proven beyond a shadow of a doubt, and has probably provided fuel for the fire for the rest of these rumors. Hey, whatever gets you through the day, right? Now, if you'll pardon me, I suddenly have the unstoppable urge to murmur some incoherent sexual innuendo to the nearest tiger. Toodles!