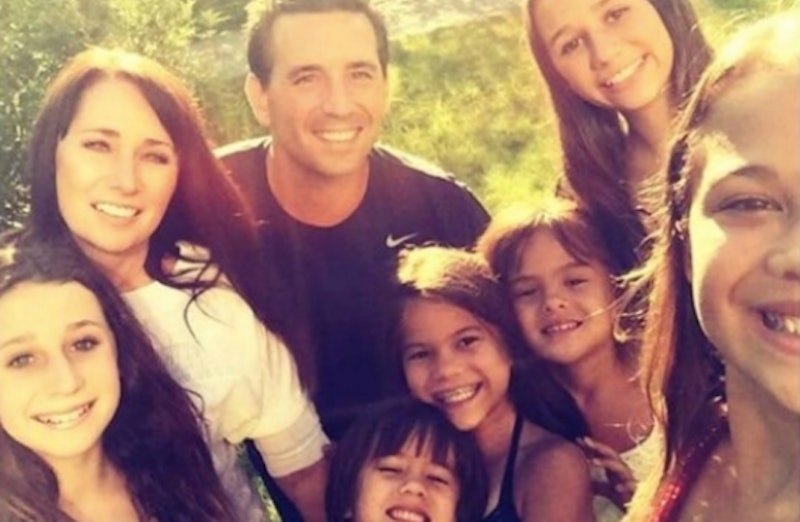 Losing your best friend to cancer at any age is an almost unbearable blow. But for Laura Ruffino, the loss of her best friend Elizabeth Diamond to Stage 4 brain cancer at age 40 changed her life in more ways than she ever could have imagined. As Ruffino told WKBW-TV recently, she made a life-altering promise to Elizabeth in 2014, right after she first learned of her diagnosis: Without hesitating, Ruffino agreed to adopt Diamond's four kids if she passed. Sadly, this April, Ruffino honored that vow, when Elizabeth passed away just one year after her diagnosis. Ruffino, who's already a mom of two, immediately welcomed Diamond's four kids into her home with open arms. But she never could have expected the sudden outpouring of love and support that wound up coming next — from all across their community.

Before Diamond's passing this spring, she and Ruffino had been BFFs for nearly three decades — which means they'd pretty much been through it all together. And that's exactly why Ruffino didn't think twice before agreeing to take in Diamond's daughters Lily, Ella, Samona, and Tara, who range in age from five to 12. "She said if anything ever happens to me I want you to take my girls. And I instantly said OK," Ruffino told WKBW-TV.

The hope, of course, was that she'd never have to honor that promise, and that the vow itself would be nothing more than a what if conversation between friends. But as Ruffino told the station, the crippling reality of it all started to sink in as Diamond's condition worsened. "As she started to weaken you can imagine the fears that I had for the girls and being without her," Ruffino told the outlet.

In the three months since Diamond's passing, Ruffino and her husband Rico have done their best to care for Diamond's daughters as they would their own. But the realities of adding four growing kids to your brood — and essentially doubling your family's size overnight — has taken an unavoidable toll on their money and space. For starters, their small home is starting to get pretty cramped. But they also stumbled upon some practical changes that needed to happen to accommodate their new blended family, like getting a bigger dinner table to fit eight, and upgrading to a much bigger fridge.

Luckily, though, Ruffino and Rico live in what just might be one of the most awesome communities ever. Once their moving story started to spread, donations and support began flooding in from friends, neighbors, and even strangers. In fact, their story has touched so many hearts that a fundraiser is being thrown for the Ruffino-Diamonds on August 30, near their home in West Seneca, New York.

As for the Ruffinos, they've been pretty much overwhelmed by all the ways in which strangers have come forward to help. They're also remaining upbeat despite missing their friend Elizabeth every single day. "Ten years ago I didn’t think this would be my life," Rico told WKBW-TV, before adding in the best life advice ever: "If something gets thrown at you, just accept the challenge and do the best you can."

Aside from the fundraiser, a YouCaring campaign page has also been set up for donations. Its description, in part, reads:

This family is doing EVERYTHING in their power to make the Diamond daughters feel loved and part of the family. It is the most beautiful thing we have ever seen. The marriage of both families is a true testament to humanity. The family has trouble asking for help because they have always been so self-sufficient, but it takes a village to raise a child.

So far, nearly $66,000 has been raised for the Ruffino-Diamond family, but more is still needed. If you'd like to make a donation of your own, visit the family's YouCaring campaign page and give what you can. Do it for the Diamond's daughters but also just to celebrate a friendship this strong.