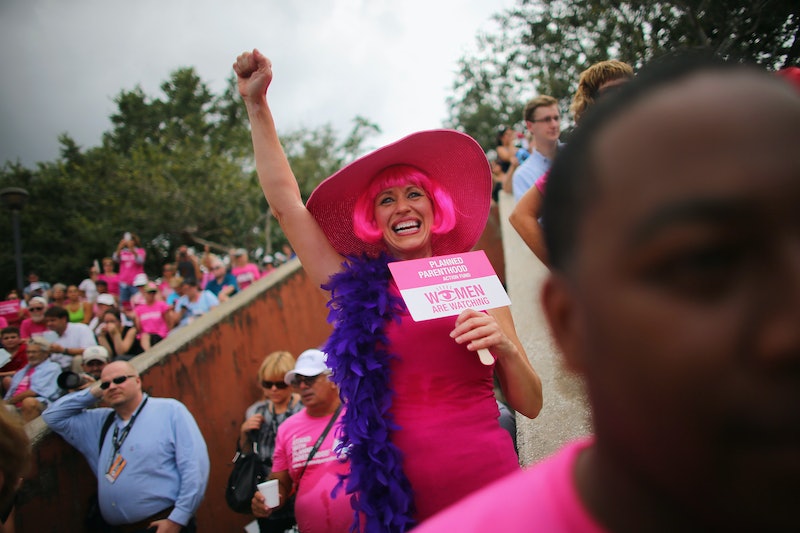 Antiabortion group The Center for Medical Progress is attacking Planned Parenthood with deceptive videos in an attempt to have the nationwide health-care provider defunded. Two hidden camera videos show Planned Parenthood executives discussing the collection of fetal tissue for medical research, but the CMD purports that they show the employees talking about selling fetal body parts, which is illegal. Republican presidential candidates are using these misleading videos to their advantage, calling on Congress to investigate and defund Planned Parenthood. Most Democrats have been silent on the issue, but Hillary Clinton defended Planned Parenthood against the video attacks on Thursday.

House Republicans jump-started a Congressional investigation into Planned Parenthood's actions. And presidential contenders, including Rand Paul, Ted Cruz, and Carly Fiorina, blasted the organization. Meanwhile, most Democratic presidential candidates weren't saying a word. On Thursday, Hillary Clinton finally defended the health-care provider when asked about the videos at a town hall in Greenville, South Carolina. She said: "I'm hoping that this situation will not further undermine the very important services [it offers]." Clinton's always been vocal about her pro-choice and pro-women's rights agenda, so the fact that she's standing beside Planned Parenthood is no surprise. Rather than focusing on the deceptive stories about the organization selling fetal body parts, Clinton made the important point that Planned Parenthood provides vital health care to women across the nation.

Clinton also pointed out that this is far from the first attempt to bring down Planned Parenthood, saying:

I think it is unfortunate that Planned Parenthood has been the object of such a concerted attack for so many years, and it’s really an attack against a woman’s right to choose.... For more than a century Planned Parenthood has provided essential services for women, not just reproductive health services, including access to affordable family planning, but cancer screenings, for example, and other health checkups.

So far, Clinton's the only Democratic presidential candidate to comment on the scandal, and very few Democrats in Congress have stood up for Planned Parenthood. Fiorina directly called out the Democratic party, Clinton included, for its silence on the issue in a video she made, saying: "It doesn’t matter whether you think you’re pro-choice or pro-life. Every woman, every man has to look at these videos and think, What has gone wrong in our nation? ... It is made even more terrible by the absolute deafening silence of the Democratic Party. Democrats have always fought for a policy that says it is not a life until it leaves the hospital. Hillary Clinton has fought to preserve that policy."

Clinton was already the top candidate for women's issues, and defending Planned Parenthood only solidified that position. Given that she waited so long to say anything on the topic, it might be that Democrats just don't want to give the misguided attacks any credence. But after so much talk from the right, it's encouraging to hear that someone still supports Planned Parenthood's services.