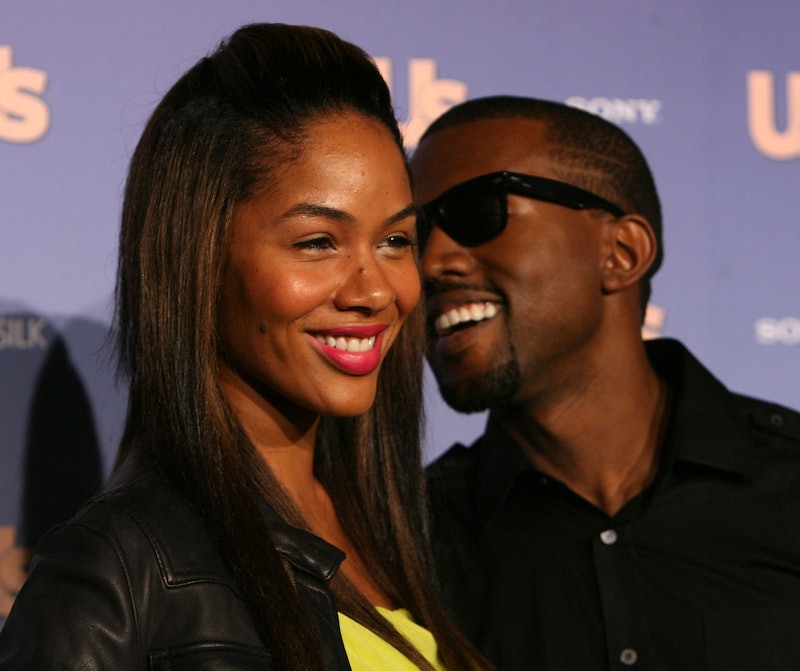 I know it seems like Yeezy has been a Kardashian forever, but let us not forget that he had a life before Kimberly Noel Kardashian came around. In fact, Kanye West was once dangerously close to marrying someone else. He's a family man now, but before North West, and even before Kim, there were other women in Kanye's life, though it may be impossible to believe now. So, who did Kanye West date before Kim Kardashian?

Yeezy knows love, and he knows heartache. He's never been afraid to wear his heart on his sleeve, and pouring all his feelings into his albums. And because he lives each day of his life like a work of art, Kanye would never be romantically linked with someone who he couldn't call his muse, would he? He needs constant inspiration. In fact, one of his most inspired recent performances was dedicated to his muses: he crushed it with the feelings while singing "Only One" at the Grammys earlier this year, a track dedicated to his wife, his daughter, and his late mother, Donda West.

Here are the pre-Kim women that Kanye knew, loved, and lost. I've been watching him date for more than a decade now, and I'm glad that he's finally found his soulmate and settled down.

Alex Phifer knew Kanye back when he was just a regular dude (or as regular as a genius can be). The rapper met Phifer, a fashion designer, back in 2002, two years before he released the album that set a flame to his career, The College Dropout. They got engaged in 2006, and lived a fabulous, fashionable life in harmony for a sweet, 18 months. The rapper and designer were the stars of a spread in Harper's Bazaar that featured Kanye's swanky pad. And Yeezy was still Yeezy, even then, describing his style as "pop luxury" (still true) and saying that Phifer "helped him get fresh." If that's true, we as the public owe her everything; the world needs Fresh Kanye.

Sadly, though, things couldn't stay fresh forever, and Kanye and Phifer parted ways in 2008. In an interview with Vibe in 2011, Phifer talked about her life post-Kanye, saying that she preferred to stay out of the spotlight: "I think after experiencing being with somebody that is a celebrity, it’s really nice to have your anonymity." I guess if you can't deal with Kanye's fame, you can't deal with Kanye. Even though Yeezy was devastated, seemed like there were no hard feelings on Phifer's end" "I wish him the best in his future and all of his endeavors. He's one of the most talented people I've ever met." Aw, man. That's nice.

When Phifer and West split up briefly in 2004, the rapper started dating Brooke Crittendon, then a production assistant for MTV, and the two were together for over two years. Unlike Phifer, though, who has for the most part kept her cards close to her chest about her relationship with Kanye, Crittendon was ready to talk about it. She told London's The Sun that Kanye had an obsession with sex and that's why she had to go. "He definitely had an appreciation with the female form," Crittendon said. She also said that Kardashian was right for him, because she "fit into his brand." Way harsh, Tai. (But not totally untrue... What's wrong with strong branding?)

Kanye and Amber Rose: It was so crazy, it ALMOST worked. After breaking off his engagement with Phifer in 2008, Kanye was smitten with the hip-hop artist and model, and they dated for two years. Bu things ended in an ugly way, and later, Rose said that Kanye had cheated on her with Kim Kardashian.

Rose got mixed up with 'Ye again earlier this year. She got entangled in a Twitter feud with Kanye's sister-in-law Khloe Kardashian after she commented about Kylie Jenner's "inappropriate" relationship with Tyga. Which led Kanye, in turn, to respond with some gross, slut-shaming comments about Rose. It was all very confusing and disappointing.

The one, the only, the Kim Kardashian. Kanye hoped in the "Bound 2" video that the two of them would make it to that Christmas, and they've more than shattered expectations. Kimye is here to stay, growing into a small empire of a family with baby Nori and another heir on the way. Whatever they've got going on, it's working. Maybe it's all those personalized selfie book gifts that really keeps the love alive.