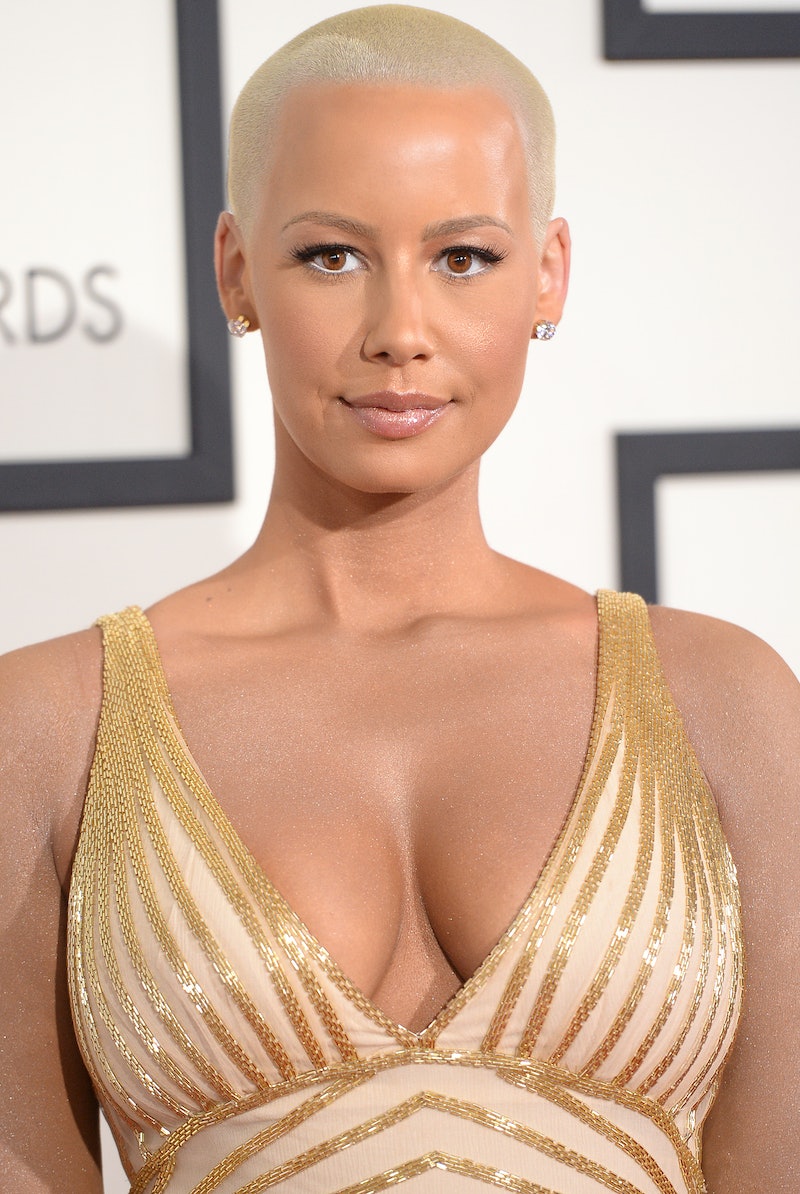 I'm crossing my fingers, knocking on wood, and doing just about every other superstitious good luck thing I can think of. Hopefully, once and for all, the Amber Rose/Kardashian war has reached an armistice. In a recent interview, Amber Rose opened up about the Khloe Kardashian Twitter feud and said, "I don't hate Khloe." Great! Now, can we just dead this issue already? It's really hard to keep up with.

Rose recently weighed in on the Kardashian/Jenner/West vs. Rose feud in an interview with Entertainment Tonight. It all began last month after Rose shared her opinion in a radio interview that 17-year-old Kylie Jenner supposedly dating 25-year-old Tyga was inappropriate.

Khloe Kardashian subsequently hit up Rose on Twitter, which resulted in a vitriolic anger exchange that was worthy of an episode of Flavor of Love. Kardashian threw shade at Rose for her former career as an exotic dancer, and Rose threw shade at Kardashian for Kim's sex tape. Although this exchange wasn't nice for either party, Rose wants to let you know that she's totes not mad at Khloe. For realizes, guys. She told ET,

I don’t hate Khloe. I don’t hate her. I could have totally minded my own business when it came to her sister. But, me being a dancer at such a young age, dealing with older men gave me the humility and knowledge to speak on such a subject. I can understand why it came across the wrong way to her. I get it. But, that’s a phone call she could have had with me.

Three things about this. One: Yay for not hating people! Now, please let this end. Two: Rose is entitled to an opinion, but it's probably best for her to mind her own business. This issue was a slimy can of worms to open from the beginning. Three: Yeah, they probably should've had a phone chat about their feelings. We can all use a good heart-to-heart sometimes.

Rose also weighed in on a diss that Kanye West directed at her, saying that he "had to take 30 showers" after they dated. Rose stood up for herself, saying that the slut-shaming was totally not cool. She continued,

We were happy when we were together, and now all of the sudden I’m getting slut shamed because we’re not together anymore, and it’s unfair. I feel like women deal with that constantly on a daily basis, and I’m sick of it. I’m here for my girls.

OK, so snaps for you Amber. Slut-shaming is sexist fuel that powers the machine of cultural misogyny. We're on the same page there. Hopefully, we can all agree on this one fact, and everyone can agree to stop hurling insults and passing judgment, which it seems like Rose is trying to do. Interestingly enough, Rose is hosting her own SlutWalk.

Ultimately, I think it's great for everyone to take a bit of responsibility here. Just as Rose feels shamed by Yeezy and Khloe, I'm sure that Kim Kardashian and Kylie Jenner felt slut-shamed by some of Rose's previous comments. It's great to be there for your girls, but it's better to be there for all girls. Hopefully, Rose's most recent comments are a step in the right direction. As I see it, the best thing that can happen here is an end to this madness.