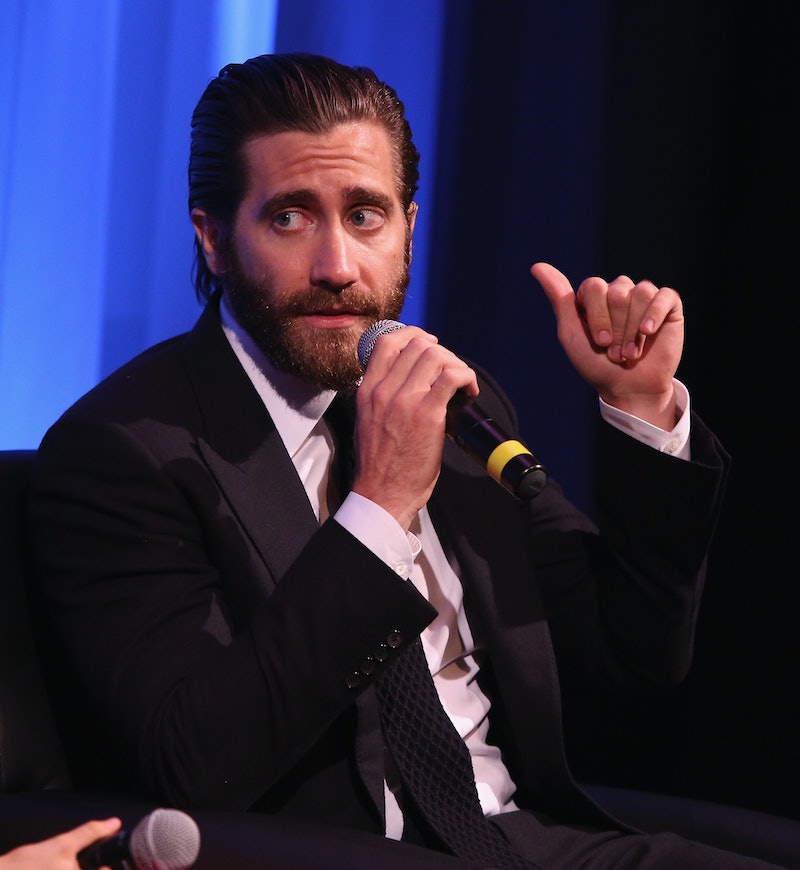 Like any badass femme fatale, Taylor Swift isn't really one to mince words or hold back what she's feeling. She doesn't usually name names when she's written a song about an ex-friend or former boyfriend who wronged her — she's classy that way, of course — but she doesn't have to, because it's generally pretty easy to tell whom a song she's written is about. Like, the fact that "All Too Well" is reportedly about Jake Gyllenhaal is no surprise...

... well, to everyone but Gyllenhaal, that is.

Apparently, Gyllenhaal may have had had no idea Swift's song "All Too Well" is actually based on their relationship, but as HuffPost points out, he'd have to be either a fantastic liar or deeply in denial to really be that clueless. "I don't know," Gyllenhaal reportedly told Howard Stern and Robin Quivers of The Howard Stern Show when they asked if he knew the song was about him.

Personally, I can't believe there's no way Gyllenhaal really didn't know the song was about him — but, just to give him the benefit of the doubt and maybe understand if that's really possible, here are a few things Gyllenhaal could've thought "All To Well" is about:

Falling In Love With A Scarf Thief

"I left my scarf there at your sister's house / And you've still got it in your drawer even now."

If Gyllenhaal's sister, the equally famous Maggie Gyllenhaal, does still have Swift's scarf at her house, maybe he thought it was a coincidence?

Realizing You Have Psychic Powers

"I walked through the door with you, the air was cold / But something 'bout it felt like home somehow."

A Fun Cross-Country Road Trip With Your Dog

"Oh, your sweet disposition and my wide-eyed gaze / We're singing in the car, getting lost Upstate."

Teaching Your Teenage Brother How To Drive

"'Cause there we are again on that little town street / You almost ran the red 'cause you were looking over at me."

"Photo album on the counter, your cheeks were turning red / You used to be a little kid with glasses in a twin sized bed / And your mother's telling stories about you on a tee ball team."

But not Gyllenhaal's parents. Another boyfriend's parents, surely.

Realizing Your Favorite Magic Shop Is Going Out Of Business

"And I know it's long gone / And that magic's not here no more."

Reminiscing On Your Former Career As A Lumberjack

"After plaid shirt days and nights when you made me your own / Now you mail back my things and I walk home alone."

Before you were unceremoniously let go.

See? This song could really be about anything. Don't feel bad, Jake!

More like this
Taylor Swift Fans Caught A Possible ‘1989’ Clue In Her Latest Awards Show Speech
By Grace Wehniainen
Sadie Sink Would Escape Vecna From 'Stranger Things' With This Taylor Swift Song
By Grace Wehniainen
'The Summer I Turned Pretty' Using “Cruel Summer” Has Twitter Begging Taylor Swift To Release A Music Video
By Radhika Menon
Michelle Obama & Taylor Swift React To The Supreme Court Overturning Roe v. Wade
By K.W. Colyard
Get Even More From Bustle — Sign Up For The Newsletter