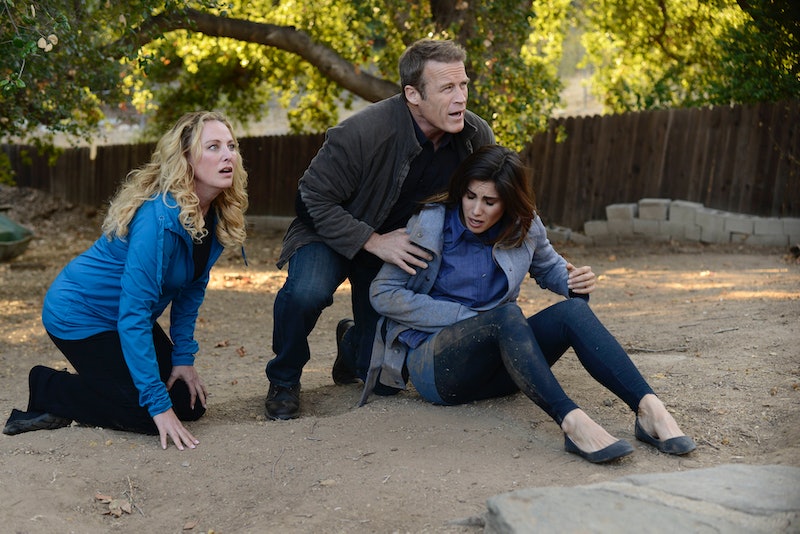 As much of its recent fare has shown, Lifetime loves a thrilling true story — beyond its more common tales of harrowing kidnappings, scorned lovers, and heroic mothers, the network has recently expanded its "true" stories into behind-the-scenes looks at beloved '90s sitcoms. But Lifetime's newest original movie, starring Virginia Madsen, doesn't fit those parameters, as Lost Boy is not based on a true story. If it was, I don't know that it would be one a real family would be willing to sell the rights to. Lost Boy follows the story of a family whose six-year-old son disappears without a trace, ending the parents' marriage and sending the mother (Madsen) down an obsessive path. Until, of course, a day 11 years later when everything changes and a 17-year-old boy shows up claiming to be the titular lost son.

From there, it doesn't exactly look like the family happily comes back together like the good old days; in fact, it kind of looks like that returned kid is up to something and, uh, maybe not the lost boy at all. So, no, thankfully this is not based on a true story. But Lifetime has aired its fair share of true disappearance stories where the kidnapped reappear years later. Here are a few recent Lifetime movies that tell such stories, plus one upcoming network TV series that shares a very similar plot.

Cleveland Abduction stars Taryn Manning as Michelle Knight, in a story ripped from the headlines of 2013. The Lifetime movie follows Knight's 11-year journey of trying to survive for the son who was left behind when she was abducted, the hope she provided for the other two women she was imprisoned with, and the story that gripped a nation of the women's rescue and return home after Berry was able to escape.

Another true story of a kidnapped person returned home that just about everyone can remember by name is the story of Elizabeth Smart; Lifetime televised their version of her kidnapping and rescue in The Elizabeth Smart Story just eight months after her return home to her family. The movie follows Elizabeth's kidnapping and subsequent nine months in hiding with her captors as the Smarts explore every route necessary to find their daughter, and Elizabeth's rescue and return home.

If you were following the network television upfronts in May, then you may have noticed that Lost Boy sounds a lot like an upcoming ABC series starring Joan Allen and the cute kid from The Way Way Back, Liam James. The Family is about, well, a family whose youngest child's disappearance wreaks havoc on their personal lives, and perhaps even more havoc when a young man returns claiming to be the son... after the son has been presumed dead with a man locked away for his murder. Watch through to the end of the trailer to feel incredibly creeped out, and preview what looks to be a very similar plot in Lost Boy.