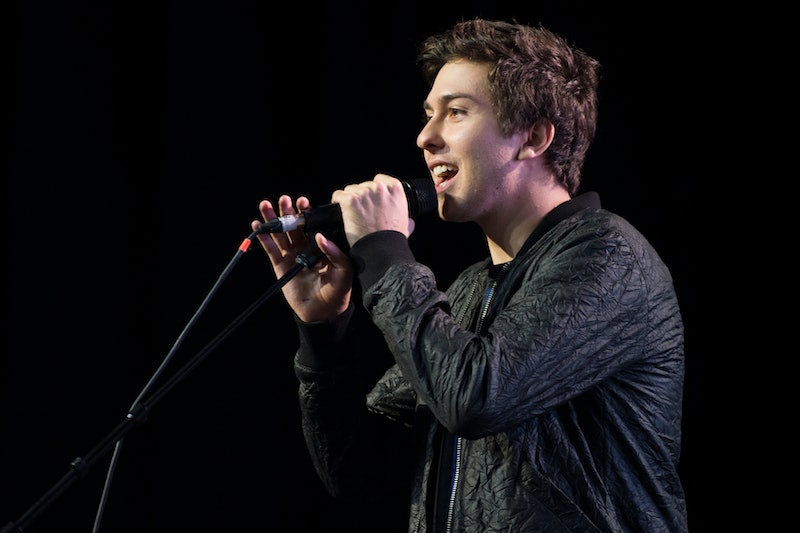 In the new movie Paper Towns, based on the John Green novel, Nat Wolff plays the lead role of high schooler Quentin "Q" Jacobsen, who sets off on a cross country mission with a few of his friends to locate the girl next door who's gone missing. Wolff gives a strong performance in the film, but did you know that he does more than just act for the movie? The multi-talented star also lends his voice, singing both the Pokemon theme song and the Paper Towns end credits song, "Look Outside." Pretty surprising, right?

Actually, not so much. Although he's become known for his skyrocketing acting career, Wolff has been a musician for even longer than he's been acting, so it's no surprise that he ended up with a tune on the film's lauded soundtrack. But just how long, exactly? Well, he's been writing music ever since he was five, if that gives you any indication. Nat and his brother, Alex, first found success together in the 2007 Nickelodeon TV series The Naked Brothers Band, which as you can probably guess, featured the pair as leaders of the titular naked band. Nat and Alex then went on to form a band IRL, called, get this, Nat and Alex Wolff, in 2009. The duo have released two full-length albums: Black Sheep in 2011 and Throwbacks in 2013, along with several singles. Check out some of Nat's work in the songs below, and see for yourself that he earned his spot on the Paper Towns soundtrack.

A piano ballad, the single from Paper Towns shows how Wolff has evolved as an artist. It's really good, and so fitting for the film.

Nat trades in his guitar to tickle the ivories in this haunting ballad, showing off his range as a musician. How has this song not been in a John Green movie yet?

Maybe it's because I know Nat's an actor, but pretty much all of these songs feel like they could slip into a ton of movie or TV soundtracks. It's a shame The O.C. isn't on anymore, this song would have fit in perfectly with that show's musical pedigree.

Nat gives up lead vocals to Alex here, but this song is such an awesome straight-up rocker that I don't even care that it's being sung by what appears to be a nine-year-old vampire.

If I were 13, I would probably think these lyrics were absolute genius, but now they seem pretty silly. Still, that riff!

Never mind that Nat seems like he's really into a mannequin in the video, this song is about as radio-friendly as pop rock gets.

This song is both educational and it promotes healthy eating, two things any child band worth their salt knows are important if they want to make it in this business. Good luck getting this earworm out of your head.

It's kind of unfair how many talents Wolff possesses — can't he leave something for the rest of us?