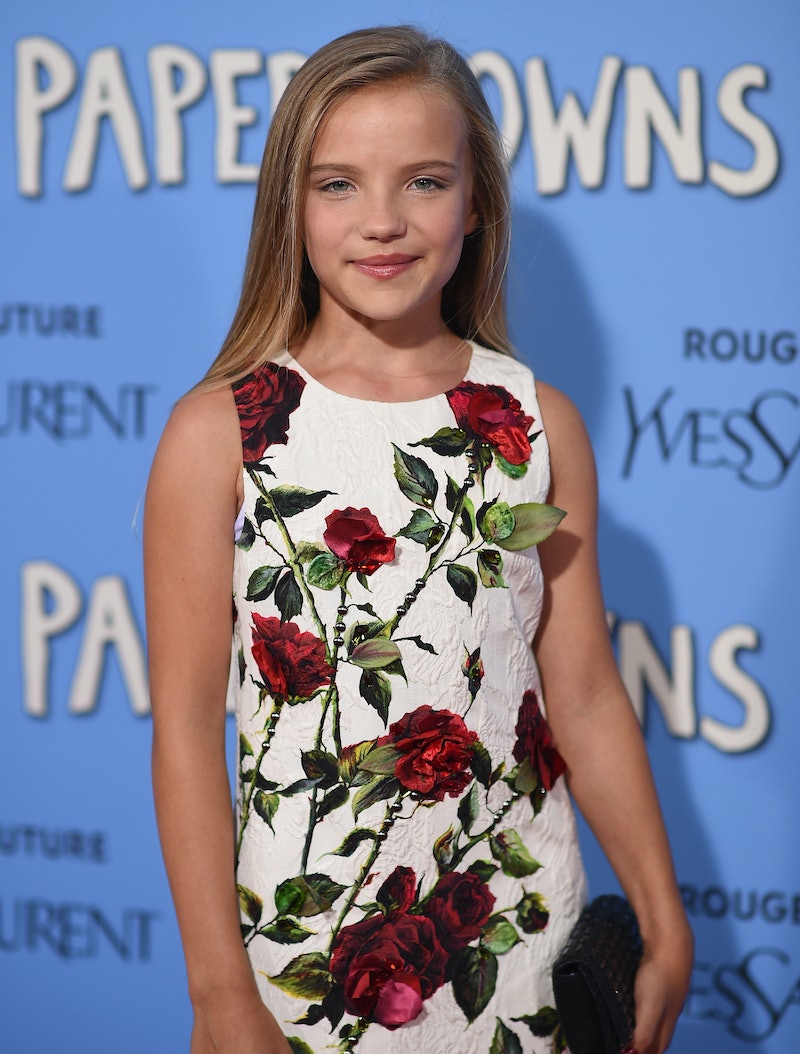 One of the coolest things about the rate of John Green novels being made into movies that not only does it introduce a different (and more tolerable) version of the teen romance genre, but it also puts the spotlight on some of Hollywood's young, up-and-coming talent. The Fault in Our Stars made Shailene Woodley and Ansel Elgort into big-name actors, and it introduced audiences to Nat Wolff, who now plays the leading man in this month's Paper Towns. Now, the new movie is producing its own crop of stars, including Cara Delevingne, Halston Sage, Austin Abrams, Jaz Sinclair, and Justice Smith. Then there's the pre-teen talent being introduced, like Meg Crosbie, the actress who plays Margo's little sister in Paper Towns , Ruthie.

Crosbie's screen time is very minimal in Paper Towns, but she totally steals every scene she's in. Her character may be little, but she is a no-nonsense younger sister who doesn't have time for any games regarding her sibling's disappearance. When Q, Ben and Radar come to her house and bribe her to look through Margo's room for clues, Ruthie accepts the money, but remains in control, watching over the boys like a drill sergeant and taking no B.S. Yet despite her stern, stone-faced attitude in the movie, Crosbie's Twitter account depicts her to be a sweet, girl who has a real-life sisterhood bond with Delevingne.

As indicated by the #wcw hashtag on Crosbie's Twitter account, the young star has a soft spot in her heart for her model-turned actor "sibling." Their big sis/little sis relationship clearly goes beyond the big screen, and it's totally understandable; who wouldn't want a cool sister like Cara Delevingne?

Crosbie's bond extends to the men of the movie, as well. She tweeted out this #mcm shout out to the male Towns stars earlier this week:

And to complete the hashtag trilogy, she gave love to the rest of the cast with a good ol' fashioned #ss:

The actress may only have a couple of IMDb credits under her belt, but her role in Paper Towns will certainly make her a bigger star. For her next big movie, Crosbie will be lending her voice to the 3D CG animated feature Robodog alongside Ellen Page, Ron Perlman, Rainn Wilson, and Steve Zahn, and I can't wait to see what she has in store — especially if her future includes more projects made by John Green and inspire more great friendships like these.