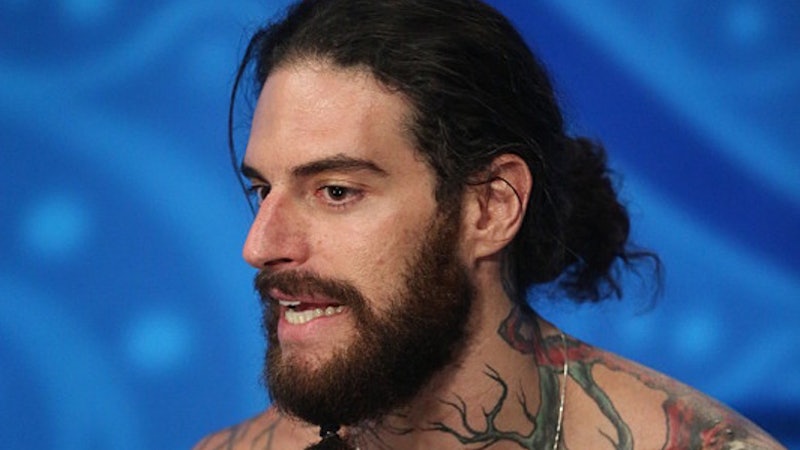 I've been calling him the second twin twist of the season, and Thursday night's eviction episode only further proves that Austin and Judas are two completely different Big Brother 17 players. It seemed inevitable that Audrey would be sent home during the Big Brother Week 4 eviction, but she shockingly received one vote in her favor courtesy of Judas. Now with Jackie and Vanessa as the two new HOHs, Austin's move to throw the house off — playing towards an America's Player twist — could come back and bite him from behind if he doesn't keep quiet about his strategy.

Austin's vote to evict John wasn't completely new to those of us who follow the feeds. After Austin got word that Steve was paranoid that people thought he was America's Player, Austin saw it as an opportunity for "Judas" to vote for Audrey to stay and evict John. In his mind, he thinks this will make people think that someone — most likely Steve — is playing for America, and that he needs to be a target. It's not that crazy of an idea, especially now that there's really no guarantee that he could be safe this week. If Jackie were to remain HOH, Austin's safety is kind of up in the air, especially because Austin was monumental in evicting Jeff during Week 3.

Austin's alter ego Judas has been threatening the house before. Austin always says that Judas will be the one backstabbing and making big game moves, and on Thursday Austin told Julie Chen that Austin and the house agree, but "Judas votes to evict John." Personally, I think it was kind of a silly move, since Austin didn't keep it a secret that he was going to be doing this on eviction night. Also, Steve is the least threatening guy in the house, so "all eyes on Steve" means he'll get maybe one extra minute of camera time. Maybe.

To see how Judas' move affects the game, check out Bustle’s very own Big Brother podcast, The Diary Room. Listen to the latest episode below, and be sure to check out future episodes on Bustle’s SoundCloud page and iTunes.