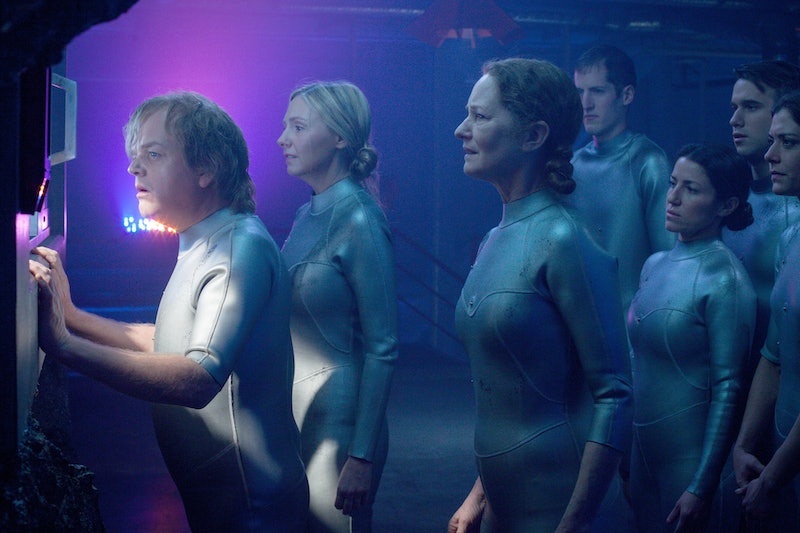 Well, that was depressing. Despite blood, sweat, tears and so much sacrifice from Kate, Harold (RIP!), Ethan Burke and his family, things in Wayward Pines just could not get any better. On Thursday's night Wayward Pines series finale, Kate's rebellion with the help of Ethan was ruined after Wayward Pines' creator David Pilcher turned off the power to the town and the gate that kept the Abbies at bay. Townspeople were murdered left and right as the rebellion attempted to save as many lives as possible and kill as many Abbies as possible. Unfortunately all of the hard work from the rebels and David Pilcher's sister Pam was all for nothing. Just three years later, the town returned to its previous way of life even though Ethan sacrificed his life to save the town and Pam killed David.

The episode, rather appropriately titled "Cycle," was action-packed and provided some moments of hope among the darkness. Even though people were being slaughtered by Abbies left and right, many in the town banded together to save each other and find a way to safety until they could get the power to the town and the fence back online. The Abbies were finding their way into every single corner of Wayward Pines, including bunkers where the townspeople had fled. Ethan ended up giving his life to the town by blowing up the brakes in the elevator and killing what looked to be hundreds of Abbies on the way down.

When Kate finally made her way to David's chambers, he refused to help the town under any circumstances. He was ready to awaken Group C and dispose of Group B completely, so his ideals for the town could continue above all else. Unfortunately for him, his sister Pam no longer felt the same way (David betraying her by forcing her back into suspended animation probably didn't help), and when David said to Kate, "Go ahead, kill me," Pam did just that. She knew that for the town to prosper in the right way, with absolute honesty, David had to be vanquished. Kate and Pam then looked at all of the people still stuck in suspended animation and talked about a new era of Wayward Pines that they hoped to usher in starting from that very moment.

But there was a major problem to their plan: They forgot about Jason and his "Class One of the Academy" army that would forever be loyal to their "visionary." You guessed it, it's David Pilcher. Towards the end of the finale, Ethan's son Ben runs over to the elevator shaft where Ethan had died to look for his father, when suddenly he is hit over the head with debris from the blast. Ben awakens in the Wayward Pines hospital where Amy is now working as a nurse. Ben asks Amy how long he's been out and she reveals the major twist in the series: Ben had been put back into suspended animation for three years along with all of the adults, and now the "Class One" cronies are running the town.

Amy states that she had to convince them to awaken Ben as they were worried he was "just like his father," and they're not wrong. Ben immediately rushes out of the hospital and takes the same confused and traumatized walk around the town that Ethan did in the pilot. When the audience sees a statue of David Pilcher recognized as a "visionary" and a man hanging in the town square with a sign on his chest that says "Do not try to leave," we know that nothing has changed. The book ending is quite different: Ethan is still alive and convinces everyone to go back into suspended animation for another couple thousand years as it's clear that the Abbies have taken over this age of the Earth. But the TV series goes for a much darker (potential) ending. The "cycle" just continues in Wayward Pines. No matter what.