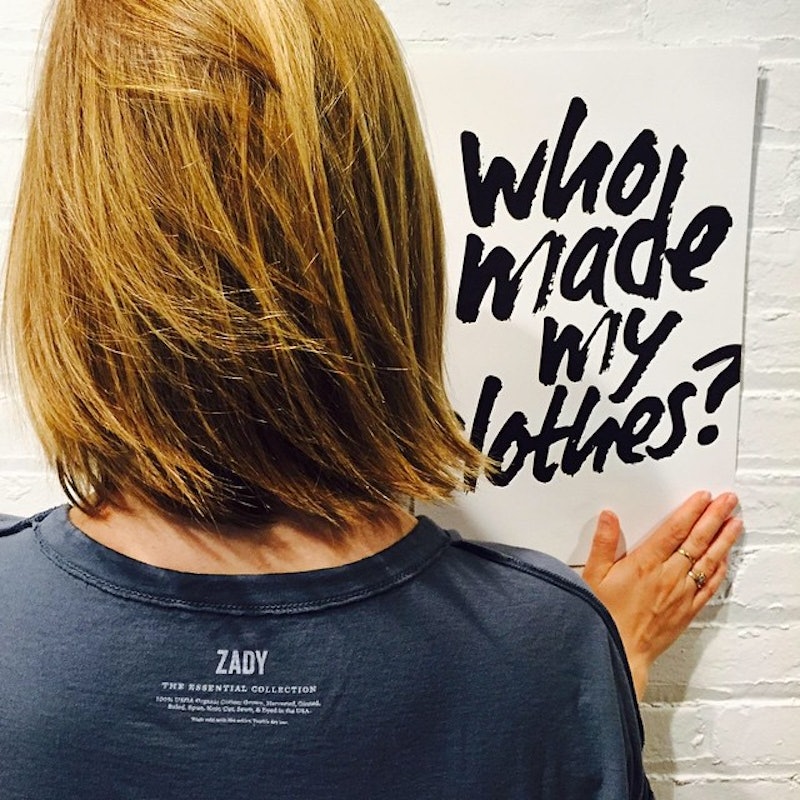 If a seven dollar t-shirt that’s such a steal could tell you it was made with chemical-laden cotton and sewn together in egregiously hazardous conditions for below minimum wage by a worker in Bangladesh, would you still buy it? Soraya Darabi and Maxine Bédat, founders of the Zady e-commerce site, are willing to bet no. Zady, which Forbes dubbed “the Whole Foods of fashion,” was born from Darabi and Bédat simply wanting clothes with a backstory that wasn’t appalling. That’s when they took matters into their own hands.

The world of fast fashion we currently live in constantly produces clothes so cheap we don’t feel guilty about the never-ending cycle of buying and throwing away and buying again. Though low price tags assure us consumers this system is "good,” it puts farmers and factory workers’ basic human rights in jeopardy and wreaks havoc on natural resources (fashion is the second most polluting industry on the planet). Luckily, Darabi and Bédat are cultivating a different, sustainable way to produce apparel: slow fashion.

Similar to the Slow Food movement that rejects mystery meats and pesticide-laced produce in favor of keeping things clean and local, slow fashion works under the same premise. Darabi told NPR, “[Slow fashion] is about understanding the process or the origins of how things are made. Where our products come from, how they're constructed and by whom.”

As a millennial raised in the culture of instant gratification and “more is more,” it’s hard to take a step back and question the craze for trends instead of the quest for style. Darabi and Bédat believe it’s not only possible to do so, but necessary for the future of humanity and the planet. Amidst their fast-paced workdays preparing for NYFW and the launch of their own line, the two entrepreneurs found time to talk to me about how to become a conscious consumer and #FightTheSystem, their powerhouse friendship, and where they draw inspiration.

The above is from Zady’s manifesto. Hoping to participate in this “call to action,” I asked Darabi and Bédat where to even start. Bédat explained, “We as consumers have been hoodwinked — first, we haven’t been told just how terrible the clothing industry is and then we get exposed to greenwashing on the regular … A great primer on the issues is the book Overdressed , by Elizabeth Cline.”

Dreaming Up Schemes With Your Bestie Can Change The World

Darabi previously held impressive media and tech titles including Manager of Digital Partnerships and Social Media at The New York Times, while Bédat comes from a background in international diplomacy, having worked with the United Nations and founding The Bootstrap Project.

On how their paths crossed, Darabi shared, “We met in the grass after a tennis practice on day early in the 9th grade and both felt as though we wanted to get to know the other immediately.” Bédat chimed in, “It all happened quite organically. We were talking a lot about where things come from and [how] it be cool and make our stuff that much more meaningful if we actually knew the story behind everything we buy.”

Turning their conversations into reality, Darabi explained, “One of the first conversations we ever had was about building a brand built upon the notion of pureness and quality. Whole Foods nailed their initial vision by telling the stories behind the organic food they carry [and] we wanted to be the brand that handled narrative well for quality apparel.”

Visiting Zady’s online store and IG, you can’t deny the two have succeeded thus far. Every single item available on the site reveals its sustainable, fairly sourced background. For example, on Zady's product page for its Essentials Linen Jersey shirt, you'll discover the flax "is grown in Normandy, France and then the flax fibers are brought to Bergamo, Italy where they are dyed, finished and spun into linen yarn."

You And Me Are Zady’s Design Inspiration

Expanding Zady’s own line this month, Bédat tells me, “The inspiration for the line is real women … Women today are really fighting to have it all and even understand what that means. The clothes are meant to feel great, be easy to wear, and fit the multiple roles we play.”

Whatever “have it all” means to Darabi and Bédat, it seems nothing is going to slow them down on their mission to create a world where slow fashion is the new standard. Darabi lives by the Eleanor Roosevelt quote, “The future belongs to those who believe in the beauty of their dreams,” while Bédat takes a more tactical approach: “Nike said it best, ‘Just do it!” No wonder they make a good team.