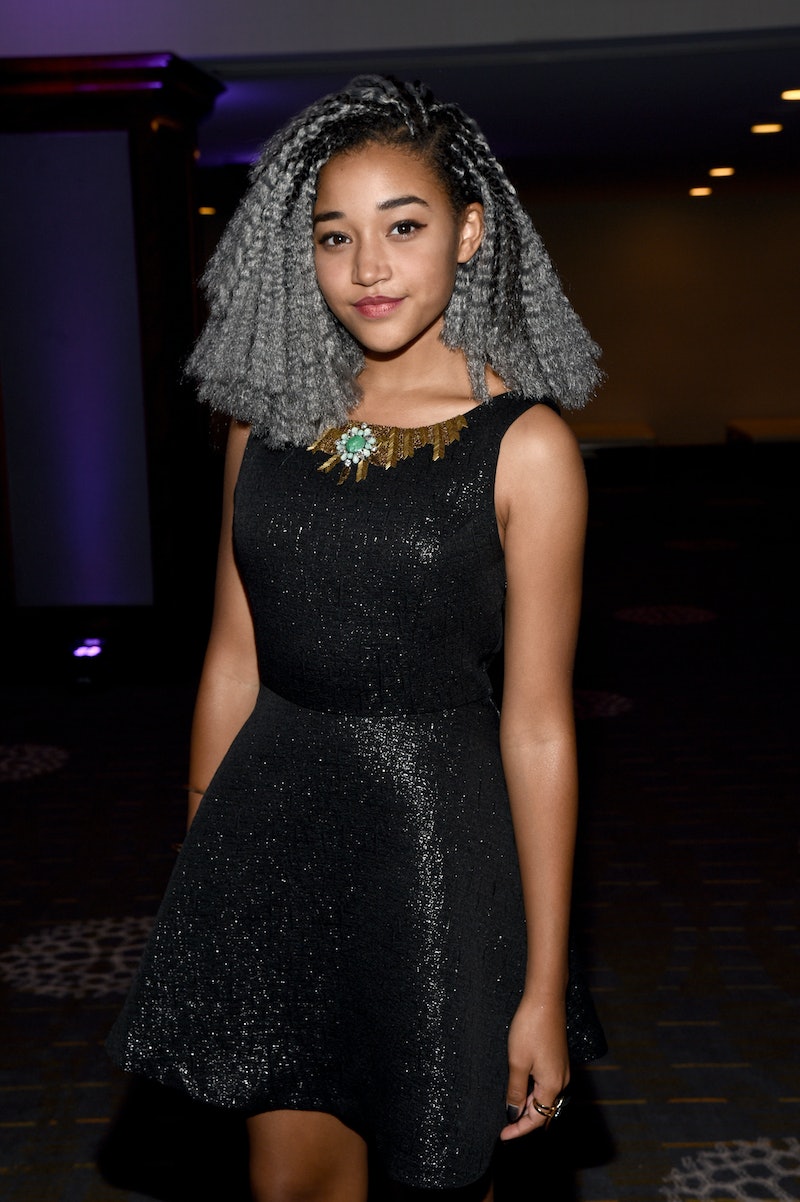 Actress Amandla Stenberg possesses a maturity, wisdom, and eloquence well beyond her 16 years, and the Hunger Games star has frequently shown these character traits with her passionate, well-articulated thoughts on black culture in America. Though the world first fell in love with her as Rue, the young tribute from District 11 who was killed in the first Hunger Games film, Stenberg has made a name for herself with her important discussion of racial issues. With her poise and candor, Amandla Stenberg's quotes have gone viral almost instantly, and thanks to her Hunger Games fame, she has a powerful platform on which to stand and spread her words to a wide variety of people.

Whether it's her on-point definition of cultural appropriation, her eloquent conversations about race and black culture, or her hilariously relatable tweets about her father's semi-embarrassing dad jokes (seriously, we've all been there), Stenberg voices her opinions and carries herself in a way that cultivates and opens important discussions — and simply just allows people to relate to her words. No matter what she says or how she says it, one thing's for sure: Amandla Stenberg always says it best. And the examples below prove it.

1. When she educated everyone on cultural appropriation

In the "Don't Cash Crop My Cornrows" video made for her history class, the ever-eloquent Stenberg defined "cultural appropriation" as follows:

For the full extent of her speech (and this should be required viewing for everyone), watch the entire 4+ minute video above.

2. When she subsequently called out Kylie Jenner for cultural appropriation

After Kylie Jenner posted a photo of her hair in cornrows, Stenberg quickly schooled her in the matter, writing on Jenner's Instagram: "when u appropriate black features and culture but fail to use ur position of power to help black Americans by directing attention towards ur wigs instead of police brutality or racism #whitegirlsdoitbetter."

3. When she spoke out about what it is like to be a black woman in society

"Words by me," she captioned the powerful message.

4. When she unveiled her inner Beyoncé stan

This is everyone's dream, to be honest.

5. When she perfectly captured the joy of those Hallmark cards that play music

This one brings me back to those HitClips days.

6. When she called to end the "angry black woman" stereotype

Voicing your opinion and having strong convictions does not equate to anger.

7. When she Internet-rolled her eyes at her father's dad jokes

8. When she made an important point about media coverage of racial discussions

Starting a discussion about racial issues > any perceived celebrity feud.

9. And when 13-year-old Amandla shut down racist haters with class

When it was first revealed that Stenberg was cast as Rue in the first Hunger Games film, some "fans" were inexplicably pissed that they cast a black actress in the role, despite the fact that her character was explicitly described in the book as being dark-skinned. The haters took to Twitter to argue the point in a shockingly racist fashion, but Amandla Stenberg — who was just 13 years old at the time — paid no mind and responded to the hate speech with nothing but pure class. "It was an amazing experience; I am proud of the film and my performance. I want to thank all of my fans and the entire Hunger Games community for their support and loyalty," she told Us Weekly in a statement. #ByeRacistFelicias.