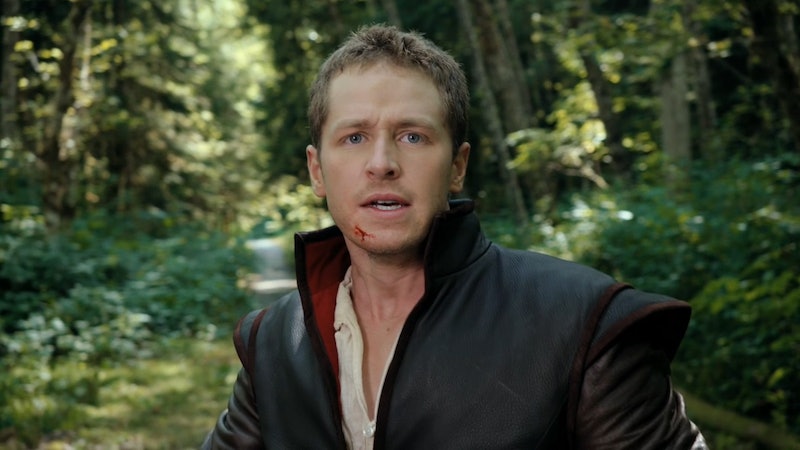 Poor Prince Charming hasn't had much time to do any real male bonding, well, pretty much ever — not back in the Enchanted Forest, and certainly not during his life post-Dark Curse in Storybrooke in David. He doesn't seem to mind being surrounded by women most of the time, bless his heart, but Once Upon A Time Season 5 is finally going to give Charming his very own bromance with King Arthur, and it's about time. We all know that the Storybrooke crew are headed to Camelot in order to find Merlin and save Emma from the Darkness that's now tethered to her, but it seems David is going to find some time to bro out while he's there, and while that sub-plot is kinda besides the point, I'd say he's earned a little levity, wouldn't you?

Talking to Entertainment Weekly, Josh Dallas, the actor behind Charming, was pretty jazzed about the whole situation, revealing, "You’re going to see Charming have a big bromance with King Arthur and go on some adventures. We’re going to see Charming at his most heroic in Camelot." That's great and all — both Charming and Snow have some real catching up to do in the hero department, that's for sure — but given that Once is, essentially, a show about strong women, I wouldn't get too excited about Charming possibly saving the day. The ladies are perfectly capable of doing that themselves. But I digress.

It's unclear whether or not Charming and Arthur will be meeting for the first time in Camelot, or whether they're actually old friends having a reunion, but that hardly matters. Knowing that the pair end up as friends gives us a hint as to what we can expect from Arthur insofar as the mission to find Merlin is concerned. Given the bromance element, it's likely that Arthur will help the Charmings, Regina, Hook and whoever else comes along to Camelot to locate the elusive and powerful wizard so that they're one step closer to getting Emma back to her old self again.

And Arthur may, in fact, end up sticking around. While we don't know anything in regards to how long everyone will be in Camelot, it's hard to imagine that Once went through the trouble of casting these roles and making announcements surrounding the new characters if they were only going to be around for a week or two. Will Arthur, Guinevere, Percival and Merlin end up back in Storybrooke? Anything's possible, but I suppose we'll just have to wait and see.