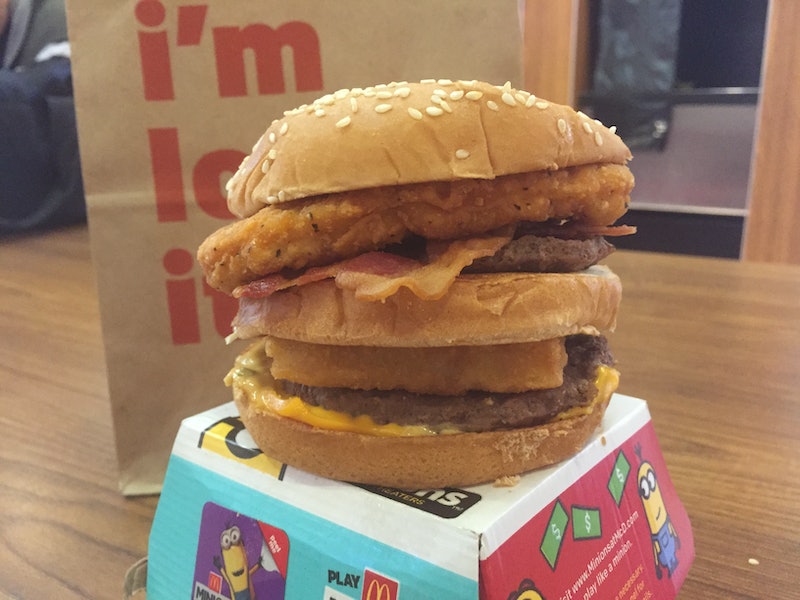 When I first heard there was a McDonald's secret menu loaded with items so inventive they bordered slightly on insane, I didn't stop to think logistics. I wasn't quite sure how to order off the McDonald's secret menu, or where I could even find the thing, for that matter, but I did know this: I was going to do a McDonald's secret menu taste test, even if it killed me. I mean, with menu items like the Land, Sea, and Air Burger (a triple-layer Big Mac, Filet-O-Fish, and McChicken stack), how could I not?! Even the healthiest of eaters have to admit that they were at least a tiny bit curious to find out what exactly makes a Monster Mac so monstrous (it probably has something to do with the fact that this sandwich is literally just eight burger patties piled up on top of each other), and as someone who has been known to order a McChicken sandwich and a large fry at a McDonald's counter only to go back through the Drive-Thru to follow up with an Oreo McFlurry, I had to know what "secrets" awaited me.

I would soon find out through experience, however, that ordering off the McDonald's secret menu wasn't as easy as simply waltzing into a restaurant and casually asking for a Big McChicken (two burger patties sandwiched between three McChicken patties, obvs). Generally speaking, people behind the counter had no idea what I was talking about when I tried to order a secret menu item by name. In fact, the majority of McDonald's employees I encountered claimed they had never heard of a "secret menu" before — ever. I had come prepared for this type of reaction, though. In the “Ask Me Anything” Reddit thread that originally exposed the McDonald's secret menu to an unsuspecting world, an anonymous McDonald's manager explained that workers might not know secret menu items by name, but "if you explain what it is, and are willing to pay for all the ingredients," it's something they can whip right up. So I did what any eager foodie waiting to sink her teeth into an Apple Pie McFlurry would do — I came armed with descriptions and photos, and I waited to have my mind blown.

All in all, I ended up visiting three different New York City McDonald's restaurants in the course of my investigation, and was able to, with a little coaxing, get my hands on a Land, Sea, and Air Burger, a Big McChicken, and an Apple Pie McFlurry. (I wanted to try a Monster Mac, honest I did, but when it came right down to it, I simply didn't have the gumption.) Not only did I get to try it all, but I lived to tell about my experience. Here's everything you need to know about what it's like eating off the McDonald's secret menu.

For reasons I can't entirely explain, this was the secret menu item I was most excited to try. Maybe it's because I can never make up my mind when it comes time to order, and this triple threat makes it so you never have to choose between a burger, chicken, or fish. When I first tried to order this sandwich by name, I was met only by blank stares. When I whipped out a photo I had found on Instagram and tried to describe the sandwich to the woman working the counter, the pieces seemed to click — but the confusion didn't completely dissipate. "Yeah, we can make you that. But do you really want us to?"

Once I finally had this miracle burger in my possession, it took me a few tries to get a solid bite — that's a lot of meat, you guys — and when I finally did? I was overpowered by the taste of tartar sauce, followed by a slight hint of bacon, and a whole lot of bread. This was kinda sad, and it didn't improve after the second bite. Eventually, having come to the disappointing realization that when it comes to McDonald's menu items, you really can't have it all, I picked off the McChicken patty, nibbled on that for a while, and called it a night.

The Big McChicken sandwich isn't really a sandwich at all, so much as it is alternating patties of different meats. Fast food die-hards may fondly think back to KFC's Double Down, which used a similar model, only it incorporated bacon and cheese. (You bet I tried that when it first came out, too.)

Having already experienced general success ordering a Land, Sea, and Air Burger, I felt pretty good about my chances with this one. In theory, all I had to do was politely ask for a Big McChicken, and if that didn't work, patiently explain that I wanted two beef patties sandwiched between three McChicken patties with extra pickle and mayo, hold the bun. But when I showed a picture of my order to the woman working the counter, she didn't seem thrilled. "Let me go ask," she said.

When she came back, she informed me that the "sandwich" I had asked for was too big for them to make. "Well," I said, "what if we downsized and only used, like, two McChicken patties instead of three?" "I don't think so," she said. "What if I ordered three McChicken sandwiches and two hamburgers, and then just build the sandwich myself?" I countered. That, she said, would work.

Armed with five freshly made sandwiches, my first step was to assemble my materials:

Then, it was time to build my monster. This was actually pretty fun:

But when it came time to eat my masterpiece, I realized that was going to be basically impossible. Like the Land, Sea, and Air Burger, even taking a single bite out of this McDonald's behemoth was a mega-huge mouthful, and without buns to help you get a good grip, you're essentially just shoveling five different slabs of meat into your face all at once — and take it from me, there's no graceful way to do this. Not ready to admit defeat just yet, I decided to break down my sandwich into smaller, more accessible mini sandwiches, pairing beef with chicken to keep the Big McChicken's integrity intact...

... and you wanna know something? Thanks to my clutch problem solving skills, this was actually pretty good. It tasted more like a McChicken than anything else (honestly, if I hadn't put the beef patties on this sandwich myself, I wouldn't have even known they were there), but if you love McChicken sandwiches (which I do), you aren't going to be disappointed... just very, very, very full.

Oh heck yes. When I first heard that the McDonald's secret menu included an Apple Pie McFlurry, I was a little upset that I had existed for 26 whole years and had never once in my life thought to try this. When I asked the woman at the McDonald's counter if she could mix an apple pie into a snack-sized McFlurry, she (like all the others) was a little confused at first — but she was open to the idea. "I've never seen that before," she said, "but it sounds good."

And it was. Warm pieces of apple pie melted my McFlurry just enough so that it was about eight different kinds of drippy, sweet perfection, though to be honest, this comes as little surprise. Apple pies are delicious. McFlurries are delicious. Combine the two together, and you have delicious on top of more delicious. That's just McDonald's math.

If I never get to have another McFlurry again in my life, I will be content living off the memory of this ice cream dream. Except who am I kidding — I'm about to go order myself another one of these in about 15 seconds.

Does the McDonald's secret menu actually exist? Um, kind of. My biggest takeaway from this experience is that the secret menu won't just come to you — you have to go to it. You have to be bold. You have to be articulate. You have to be assertive, creative, and unwavering. If, for a second, your confidence starts to falter, your server will likely give up on you. They will tell you that what you're asking for is impossible... but it's not. Be fearless. If you find yourself face-to-face with a sandwich that involves so many layers of meat and cheese you think your stomach might just give up after the first bite, that means you've done it right — you've ordered off the McDonald's secret menu. I may never eat another Land, Sea, and Air Burger ever again, but I'm a stronger person for having tried it in the first place.

Be persistent. Be patient. Be polite. And for the love of god, make sure you try an Apple Pie McFlurry. I'm not saying it will absolutely change your life but... well, yeah. Actually it probably will.