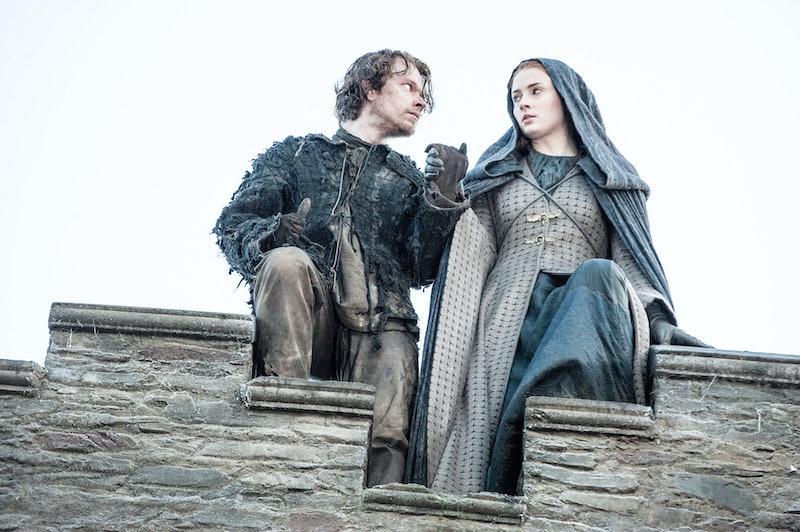 The moment The Night's Watch turned on Jon Snow and left their Lord Commander bleeding out in the snow, the majority of Game of Thrones fans became obsessed with figuring out whether or not Jon will be back for Season 6 of Game of Thrones — and trust me, I am right there with you guys. Jon Snow is hugely important in the world of Game of Thrones, not only because of his beautiful hair, but also because prophecies concerning his parentage dominate a lot of the endgame theorizing. However, he is just one character in the sprawling world of Westeros (and beyond) — and I have so many Game of Thrones Season 6 questions that don't involve Jon that I have almost lost count.

This is a stressful world. Not only is Jon seemingly dead, but Arya's blind, Sansa and Theon are running from a mad man, there's a giant zombie on Team Cersei, and Dany is right back where she started. Season 6 has a ton of story to tell and no book to draw from anymore. Having no clue what is coming is driving me more than a little bonkers — and as much as I want Jon answers, I also want to set his fate aside for awhile and discuss all of the other crazy intense things going on in Game of Thrones. Whether Jon rises from the dead or not, Season 6 has a lot of explaining to do. These are the 12 non-Jon Snow related questions I need answers to as soon as possible.

1. Will Sansa And Theon Make It To Brienne?

After months of torture — maybe years for Theon — Sansa and Theon made their escape. Unfortunately, their escape plan began and ended with jumping from a very high point of Winterfell's wall. The possibility for injury is high, and even if they aren't injured, they have to find their way to Brienne or end up wandering alone through the woods with no provisions. Add Ramsay and his dogs to this scenario, plus Theon's weakened state, and things could get so, so much worse for these sweetlings if they don't meet up with Brienne and Pod soon.

2. What Is Arya Going To Become?

I fear there will be nothing left of Arya if she continues her training with The Faceless Men. First, they took her face, and now they have taken away her sight. As Arya's identity slips further and further away from her, the closer she gets to becoming no one — a faceless assassin who kills at the God of Death's bidding. The possibility of Arya losing herself entirely scares me more than the prospect of never seeing Jon again.

3. Is Jaime Going To Wage War On Dorne?

After Myrcella's poison kiss, Jaime is obviously ticked off. His daughter woke up some serious paternal instincts in him, and he is surely going to want vengeance. Is he going to wage war on Dorne? His son's army isn't exactly at its peak at the moment, and the Martell's remain "unbowed, unbent, unbroken." A war with them could leave King's Landing wide open for attack, and its people restless. Nothing good can come of this.

4. Is Dany Seriously Right Back Where She Started?

Drogon took Dany back to the Dothrakis, undoing five seasons worth of travel. Good work Drogon! Now what? Dany isn't the Khaleesi in the eyes of these people — and though she is excellent at inspiring loyalty, without Drogo, I am afraid she's in a precarious situation here.

5. How Will Cersei Use The Zombie Mountain?

You guys, Cersei has a reanimated Mountain. That is all kinds of scary, and she is certainly going to use her new champion to go after the Sparrows. A bigger question though is how will Cersei, or anyone else, control The Mountain in his zombified state?

6. What Will Ser Davos Do Next?

The Onion King lost his king, his princess, and is currently at The Wall with Melisandre and a dead Jon Snow. Will he try to restore some order at The Wall even though he's not a brother, or is going to pledge his allegiance to a new house? Ser Davos is one of the most honest characters in all of Westeros and I cannot wait to see what his next move is now that Stannis is no longer there to command his loyalty.

7. Will Old Town Be As Cool As It Sounds?

Sam's Maester training has the potential to open up Game of Thrones by reveling in the history and magic inherent in this world. Also, Sam will be there and I operate under the belief that more Sam is never a bad thing. Most of all, I want to see if Old Town is as amazing as I've built it up to be in my head.

It's been a whole season since the show checked in with everyone's favorite vision-having, warging Stark. Is he a tree yet? Bran is off in a much more mysterious and straightforward fantasy part of the story. I want to know how it will fit in with what is going on in the rest of Westeros.

9. How Will Tyrion And Varys Ruling Meereen Work Out?

Tyrion is ruling a major country and controlling a huge army in Dany's steed. With that kind of power, he could conceivably make a play for King's Landing, especially if Jaime marches off to Dorne. A Lannister showdown would be amazing, but Tyrion is a strategist and his biggest goal should be proving his loyalty to Dany. Will he play the long game or go straight for the prize?

It's all I've ever wanted.

11. Are The White Walkers Going To Make Their Move?

It is time for the White Walkers to make their way past The Wall. Enough with the teasing. I want my wintery zombie apocalypse already.

I need to know!

See? Even when Jon is taken out of the equation, there are a whole lot of questions left for Game of Thrones to answer.