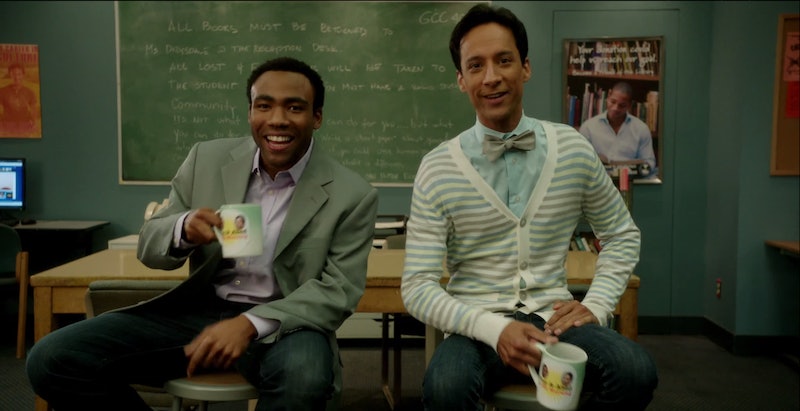 Whether it was Dan Harmon or another Community writer who came up with the mantra "six seasons and a movie," he or she was a genius. Abed's statement has become a rallying cry for the television show, and is arguably the reason why there was a sixth season, and now, creator Dan Harmon and star Ken Jeong say that the Community movie could technically happen. Cool. Cool cool cool.

Unfortunately, it's not time to start celebrating just yet — though a Community movie could happen, it's in no way close to being confirmed. It's just an amazing possibility, apparently: In an interview with The Hollywood Reporter about his other beloved cult comedy Rick and Morty, Harmon said that the Community movie is a lot more likely than another season because of contractual obligations (which makes sense, because making a movie is less of a commitment for the actors than future seasons of a TV show). Unfortunately, nothing official seems to have happened yet, and Harmon hasn't written anything for a good, if macabre, reason:

I'm not going to start writing it because what if I write 20 pages of hot Jeff and Annie action, and then Joel McHale gets hit by a bus.

Of course, a movie could mean the return of the full cast, including Shirley (Yvette Nicole Brown), Troy (Donald Glover), and Pierce (Chevy Chase), though (Pierce's return is a little less likely the character died). There is one actor who would totally be on board, though: Ken Jeong, who plays Chang. The actor told Variety that he is very interested in doing more Community:

I will do anything ‘Community’ related...I’m really setting my hopes on a movie. I really think the stars are aligned to do it. I honestly haven’t heard anything official for a seventh season or a movie, but I’d want to be a part of both. You bet your bottom dollar I’ll be asking.

"Bet your bottom dollar" sounds like such a Chang-ism, and this is such good news. Joel McHale, who plays Jeff on the show, has also previously expressed his own desire for a continuation of the Community universe.

With all this positive encouragement, it's time to start speculating about what the movie will be about, and I don't think it's too much of a leap to assume that these things would happen in the Community movie:

A "Rounding Up The Gang" Sequence

Presuming that they could get most of the original cast, and considering the fact that Community is very aware of movie spinoff tropes, there would have to be an awesome sequence of gathering the characters from their scattered locations.

References To Good And Bad Spinoffs

In the same way that Abed knows he's on a TV show, he'd certainly be aware that he was in the movie version of a TV show in the Community movie. I imagine he'd hold the Firefly film Serenity as the gold standard.

... And Other Meta References

While entire Community episodes have parodied one movie, such as Good Will Hunting and Goodfellas, I bet the movie version would feature a lot of different tropes from other movies.

A "Save Greendale" Plot

Sure, they've done this a lot, but what else could their movie center around?

Conflicted Feelings About Being A Group

A lot of the tension of the last seasons of Community have come from characters like Jeff and Abed wanting to keep the original study group together, while others are more confortable going their own way. The movie would have to deal with expectations vs. reality, especially if beloved characters like Troy returned.

Let's make that #sixseasonsandamovie catchphrase a reality sooner rather than later, yeah?