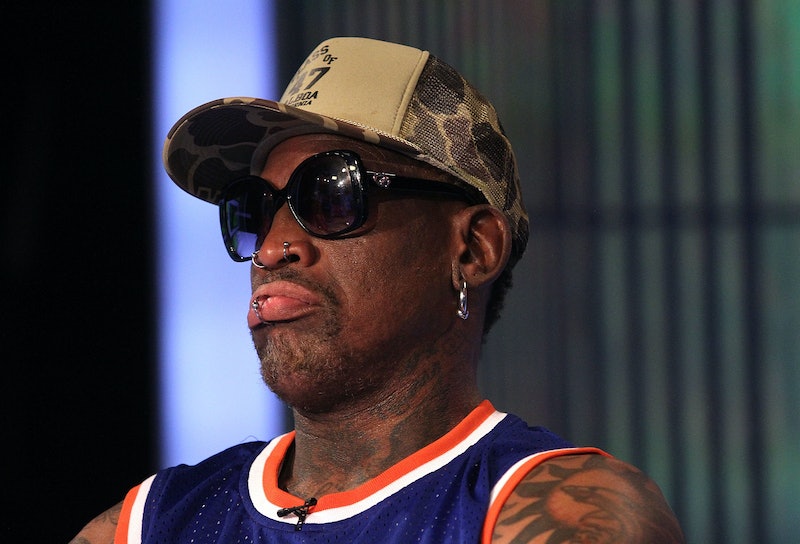 Welcome to the first bizarre endorsement of the 2016 election. Former NBA player Dennis Rodman endorsed Republican candidate Donald Trump on Friday for reasons that will probably always remain unknown. The NBA Hall of Famer, perhaps better known for his off-the-court antics, announced his ringing endorsement of Trump via Twitter.

"[Donald Trump] has been a great friend for many years," Rodman tweeted from his official account. "We don't need another politician, we need a businessman like Donald Trump!"

In turn, Trump, never missing a beat, publicly thanked Rodman for his enthusiastic endorsement. "Thank you @DennisRodman," Trump tweeted. "It's time to #MakeAmericaGreatAgain. I hope you're doing well!"

Trump, however, did not bring up season eight of The Celebrity Apprentice, in which the business mogul fired Rodman after just five weeks of whatever it is they do on that show. Rodman was reportedly fired for his erratic behavior and return to drinking. But from the looks of it, there's no lingering bad blood between these two celebrity personalities.

Trump continues to stay afloat at the top of the polls despite making ill-conceived remarks about Sen. John McCain's military past. Last Saturday, Trump claimed the Arizona senator was "not a war hero" because he was captured after his plane was shot down in North Vietnam during the Vietnam War.

Those comments, which were criticized by many of his GOP presidential challengers, only slightly dented Trump's popularity. But how can he go wrong now with an endorsement like Rodman's?

As for Rodman, this isn't the first time the former NBA star has attracted media attention for his unlikely friendships. Here's a look at Rodman's strange alliances — or what we call, "Rodman being Rodman."

Remember when Rodman traveled to North Korea in 2013 to have a romantic dinner with dictator Kim Jong-un? Yeah, that was weird. Then he went back to train the national men's basketball team and play a game for Jong-un's birthday? Even weirder.

What about when he finally professed his love for the austere dictator? Peak Rodman.

Rodman has called Jong-un his "friend for life," and has previously insisted to the press that he won't butt into North Korea's alleged human rights violations because Jong-un is his "friend first," dictator second. Their twisted bromance climaxed in January 2014 when Rodman told the press, "I love him."

It's a beautiful story, Rodman. Truly.

In between tweeting support for Donald Trump, Rodman spent much of this last week defending Hulk Hogan, the embattled professional wrestler whose WWE contract was terminated on Friday over racist statements made in a leaked sex tape. Considering that Hogan's flamboyant in-the-ring persona is not so much different from Rodman's off-the-court world, maybe we shouldn't be surprised these two appear to be best buds.

Of course, there was also Rodman's brief stint as a professional wrestler as a member of the WCW's New World Order. During his part-time wrestling career, Rodman even wrestled Hogan himself — a match that was truly made in sports heaven.

In one of the best moments of the '90s, Rodman donned a wedding dress, a blonde wig, some false eyelashes, and married himself. He rode a carriage through New York City, like any glamorous bride would, and signed the marriage license as Dennis Rodman and... Dennis Rodman.

You do you, Rodman.

More like this
10 Times Diana & Meghan Spoke Similarly On The Royal Family
By Sophie McEvoy
Ryan Reynolds Brought Some Famous Friends To Wrexham A.F.C's Last Game Of The Season
By El Hunt
Jake Daniels Just Became The UK’s First Active Football Player To Come Out As Gay Since 1990
By Sam Ramsden
What Is Jeanie Buss' Net Worth? The Lakers President Is Uber Rich
By Hugh McIntyre
Get Even More From Bustle — Sign Up For The Newsletter