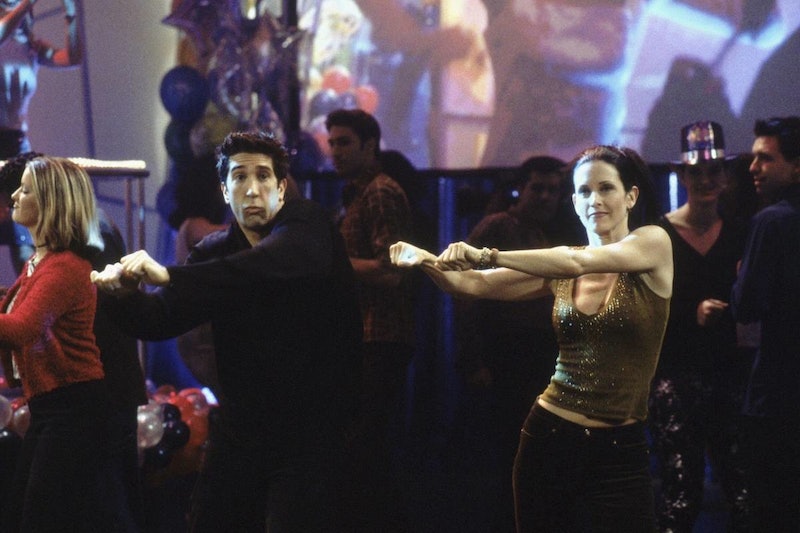 It's time to dust off those tap shoes and ballet flats, because Saturday, July 25, is National Dance Day. Woo hoo! As one who prides herself on being one of the most awkward dancers imaginable (liquid courage is a must for my dance-offs), I can think of no better way to celebrate than by reminiscing on the best dance moments from five of my favorite — albeit, fictional — friends. Throughout 10 glorious seasons, the '90s sitcom Friends offered us copious dance sequences that ranged from uproariously awkward to GIF-worthy. When looking back at the iconic series, Chandler Bing's various victory dances and unbridled flailing may be the first thing that comes to mind. However, Chandler wasn't the only one to live by the old adage, "dance like no one's watching."

Phoebe was never afraid to utilize dance in her art of seduction, Rachel showcased a skilled stanky leg after several beers, and Joey's theatrical background proved he had some serious ballroom acumen. Monica and Ross, of course, bestowed us with the infamous dance known as The Routine, but we'll get to that in a bit. Without further adieu, let's take a look at 11 of the best dance moments from Friends, ranked from good to GIF-worthy.

Am I the only one who feels that we should all take to exiting rooms in this fashion?

Most of us have had at least a few odd jobs in our adulthood. In Monica's case, a restaurant job involved despondently breaking out into the dance from "YMCA" whilst sporting fake ta-ta's and a blonde wig.

From the '80s soundtrack, to the attire, and Rachel's stanky leg, everything about this is glorious.

When Chandler and Joey win Monica and Rachel's apartment in "The One with the Embryos," an epic victory dance ensues. Check out that thrust — #skills.

At least, he didn't think anyone was watching.

8. Chandler's "Best Monica Has Ever Had" Dance

Ah, the beginnings of Chandler and Monica — when they were keeping their hookups a secret from the rest of the gang. Although gloating is usually not a good look, Chandler's victory dance after finding out he was the best Monica had ever had is pretty on fleek.

Nothing says "I'm sorry" like shimmying with a raw turkey on your head, complete with a hat and comically large sunglasses.

Obviously, I had to save the best for last. It's not hard to see why Monica and Ross earned a prestigious "honorable mention" for their performance of The Routine during middle school.

Something glorious transpired throughout the internet a couple years back, when a plethora of GIFs were created to showcase how things become ten times better when Chandler is dancing on top of them.

He danced on top of bread.

He danced for America.

He even danced alongside Beyonce.

I think it's time for a sporadic dance-off, followed by yet another round of binge-watching Friends courtesy of Netflix.

More like this
Ryan Reynolds Brought Some Famous Friends To Wrexham A.F.C's Last Game Of The Season
By El Hunt
Jake Daniels Just Became The UK’s First Active Football Player To Come Out As Gay Since 1990
By Sam Ramsden
What Is Jeanie Buss' Net Worth? The Lakers President Is Uber Rich
By Hugh McIntyre
Everything To Know About 'The Circle' Season 5
By Gretchen Smail
Get Even More From Bustle — Sign Up For The Newsletter