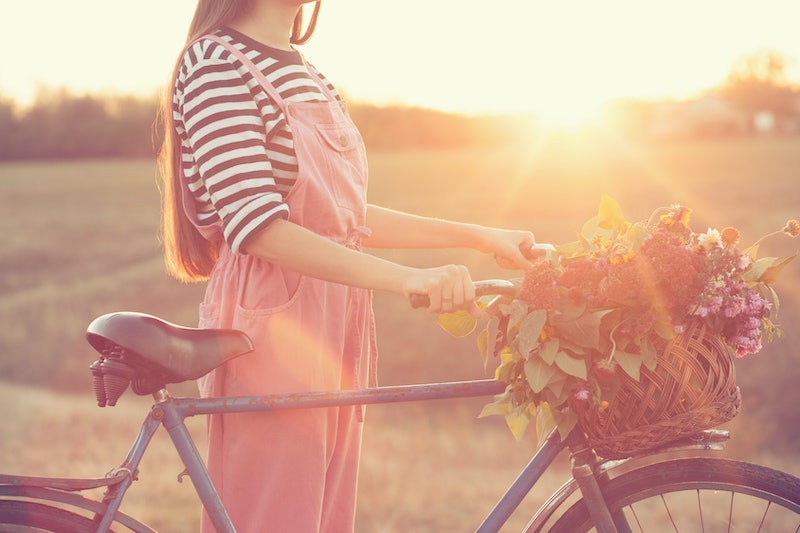 Do you ever find yourself drawn to one particular type of print when you're shopping? Even though there are a plethora of clothing patterns to choose from, I know I've been partial to at least one or two before. I went through a phase a couple of years ago, during which I literally bought anything with polka dots on it. I became aware of this penchant of mine when I posted an #OOTD and realized my pajamas, wallet, computer sleeve, and tank top were all polka dotted.

Sure, each pattern has its trendy moment in fashion every now and then, and that can totally sway my leaning toward buying and wearing a certain print. There are some patterns, however, that I'm never going to be able to stray from, whether they are on trend or not.

Have you ever thought about what that preference for stripes, animal prints, or paisley actually says about your personality? Of course it might just be a random taste thing, but it's certainly fun to dig into the history and uses of specific patterns over time. Plus, if you're going through, say, a gingham phase, perhaps there's something about it that correlates with what emotions and/or experiences you're going through in life at the moment.

I'm a tried and true polka dots and floral gal myself. See if you can relate based on these 10 popular patterns below.

You see the world as a playground. You know when it's time to get down to business, but your happy-go-lucky attitude makes everything more delightful. You're super friendly and it's possible you've heard the compliment, "You're so cute," more than you might care to admit. But hey girl, the world is better off with you in it. You remind everyone that it's OK to play.

Just like this print suggests, things are pretty black and white for you, and you don't prefer the gray areas in life. You're decisive, and you have a unique ability to compartmentalize your life, never mixing business with pleasure. Perhaps you're an excellent planner, and your strategic lifestyle keeps things in balance just the way you like it.

It's likely you're at least an occasional (or perhaps a full-on) vintage dresser. Maybe you've been told you dress like an old lady, but here's the deal: You're just an old soul in a modern world. Paisley's origins go back to the Persians and their spiritual traditions (think 200-650 AD). It's possible that there's some hidden wisdom in the spiritual side of yourself that you either know all about, or haven't yet fully discovered.

You're a traditional gal with a love for antiquity. Perhaps you find yourself pining for a different time. Your evenings are likely spent with a cup of tea and a good book. Just as toile was once almost always used for curtains and other home fabrics until its resurgence in in the early 2000s (and subsequent appearance on clothing), you're basically a domestic goddess. Everyone loves your handiness in the home.

Like the use of the chevron, or insignia, as a symbol of status in the military or police force, you are someone with big dreams and goals. You're well respected within your sphere of influence, and you're a high achiever. Perhaps you're excelling as an athlete or in some other go-getting type of profession. Either way, I salute you!

You likely weren't surprised that gingham became the hottest thing for 2015 since you're a total trendsetter. You cause shifts in people's ideas because you're a tremendous influencer. You might find that people want to be like you, and you've come to terms with the fact that even though you may feel constantly copied, it's because you're actually a born leader.

You've got a classic, chic style. You're a lover of higher education (perhaps with a penchant for history), but you're not the snooty type. After all, the Scottish background of the tartan pattern may be steeped in tradition and history, but it's also a symbol of a connection-to-the-land heritage that you embody as well, wherever you might live in the world.

Like Cary Grant and his glen plaid suit in North By Northwest, you've achieved icon status, at least among your friends. You love gray, which might mean you're partial to fall, winter, and sweater weather. You're also unafraid of change, as you can switch up your feminine style for a more traditionally masculine one.

Watch out: Hot stuff coming through! You have plenty of sass to go around and a dominant persona. A fiery leader that people can easily take direction from, your wild-at-heart ways keep you in the spotlight.

You're a romantic at heart. Your clothes are traditionally feminine, and you are probably a bit of an idealist at times. Because you're a dreamer, you see the good things that other people often can't. You likely love to travel, and like a Hawaiian floral shirt, you might even inspire tropical, relaxed vibes in those among you.

More like this
6 Steps For A Successful Healing Manifestation Ritual
By Kristine Fellizar
These Are The 3 Most Mellow Zodiac Signs
By Kristine Fellizar
Rita Ora’s Sheer Dress & Mermaid-Inspired Prosthetics Stun At British Fashion Awards
By Sophie McEvoy
Bustle Daily Newsletter: December 7, 2022
By Hayley Schueneman
Get Even More From Bustle — Sign Up For The Newsletter