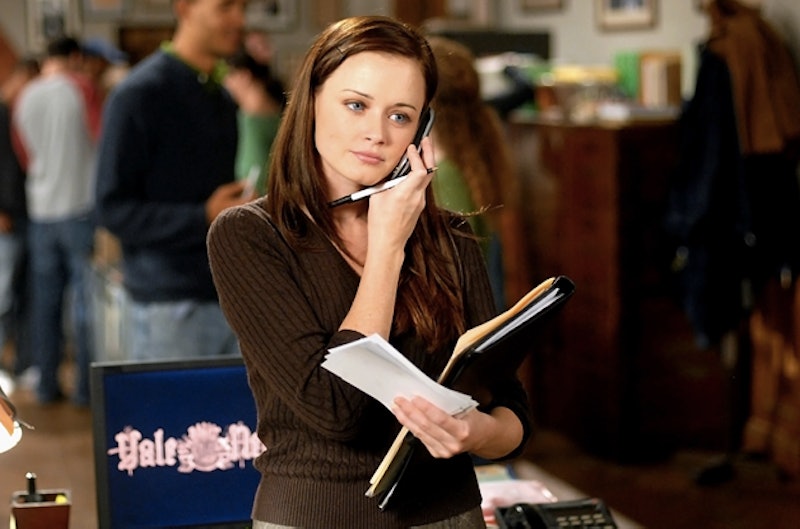 The first day of college is a seminal day for American teenagers. It’s the day in which you grow from an adolescent… to an adolescent who no longer lives with your parents (in the traditional college scenario, of course). College is a big deal, so I was overjoyed and excited watching Rory Gilmore of Gilmore Girls fame head off to her days at Yale. College was so big! So exciting! And then I got there, and, well, college was very different than what Rory & Gilmore Girls "said" it would be.

It’s not that I thought that the Gilmore Girls college experience would be super realistic, but I hoped a show that mimicked quite a few mother/daughter relations and quirky little towns that I know would at least prepare me for the first day of college. But, alas, I shipped off and I was not prepared. Sure, my dining hall had endless cereal like Rory’s, and I was always bumping into people that I didn’t want to see in the quad, and of course, there’s that nervousness in the beginning, but that was about it. In fact, I blame Rory Gilmore for my dropping out of college! (Just kidding. I didn’t drop out of college.) But while we’re talking about it, let’s take a look at the first-day-of-college stuff that Gilmore Girls got wrong.

Taking An Ugly Pic For Your ID

This isn’t something to complain about, but my school and many other schools in this day and age will let you send in a picture for your ID so they are ready to go when you get there or at least retake a bad photo. I would think they would have had this technology in 2003 (they had Google, which they talk about in the episode).

In very limited cases would you be allowed to do this. I don’t know anyone who got to choose his or her freshman roommate. If you did, you were the luckiest. My first roommate wasn’t so bad, but would she have been my first choice? Probably not. Most roommates are horror shows, so Rory lucked out with Paris. Yes, even with Paris.

A Giant Dorm Room For A Freshman

Rory’s dorm room is the kind of place that seniors dream of, and freshman don't even know exist. It’s big, it’s airy, and it has cute brick trim on the outside. My freshman dorm room was ugly cement walls and even uglier stained wood. No built-in shelving, no lovely details — just prison chic. Once again, Rory lucked out here.

The administration of my school (and any school in this day and age) drilled safety, safety, safety into every co-ed’s head, so it’s bonkers to me that Rory just left her door open all day. Sure, they were moving stuff in and out, but couldn’t someone just waltz right in and steal it all? Or hide under the bed? Or something else weird? Lock your doors, Rory. You’ll need that later when you find Marty naked outside your door.

The Switching Of The Mattresses

Isn’t the mattress slogan in college “you get what you get and you don’t get upset”? I’ve never heard of being able to bring your own mattress to college. I wish I could have, as I basically slept on a tablecloth stuffed with hay.

Showing Up With No Stuff

There’s always that last-minute run to Wal-Mart or Target, but Rory really showed up with nothing but her clothes and her books. Come on, Lorelai! You buy those baskets and towels and a cute little throw rug before the first day of school.

This is a thing that happens in all TV shows — a too-peppy RA or tour guide waiting for the students and parents to arrive at the curb. I’m not sure there were any guides waiting when I arrived. I may have blacked out their pep, though — it was early.

The Party On The First Night

Just kidding. As soon as the parents leave, this totally happens.

Ah, if only I knew then what I know now — I could have had a completely different, Gilmore-ready college experience.