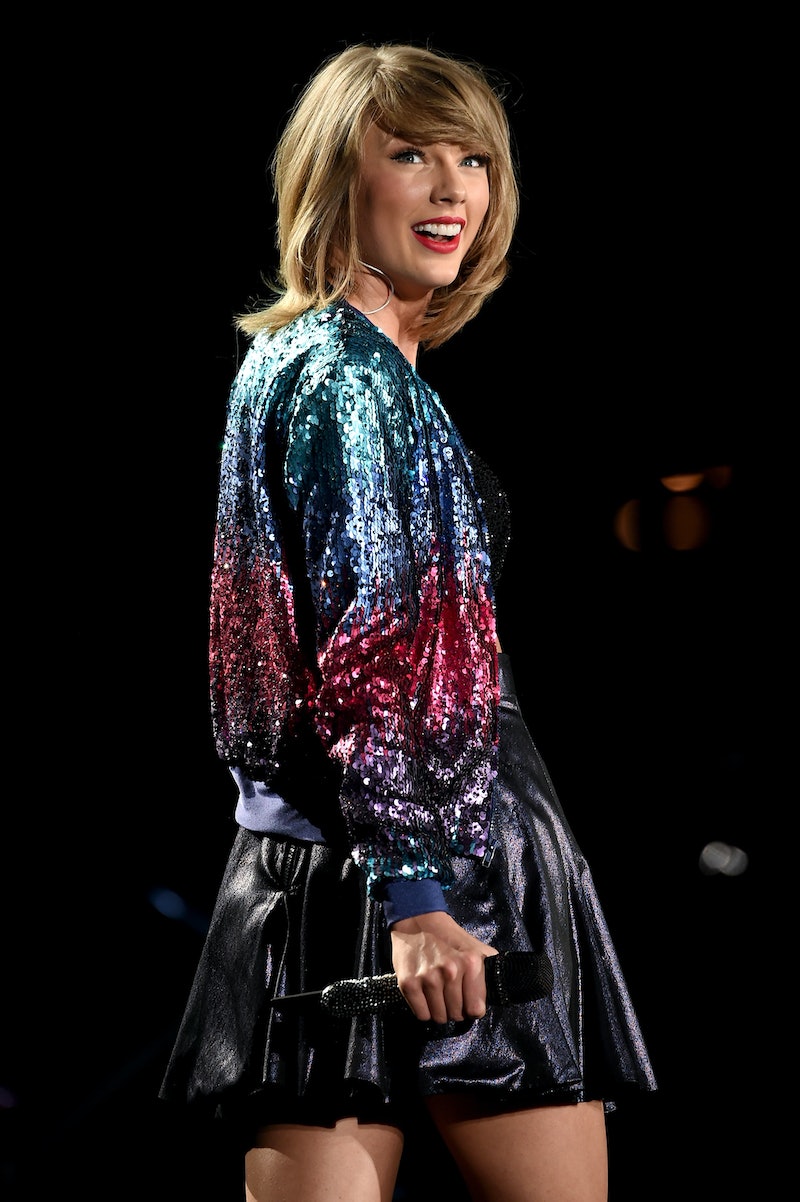 Whether you love her or you hate her, you have to be able to admit one thing: Taylor Swift is the busiest celebrity on the planet. It just doesn't seem possible that the star can fit in as many things in one year, let alone one day, as she seemingly does. There are the concerts, and the songwriting, and hanging out with friends, and the boyfriend dates, and the road trips, and the goodwill visits to hospitals, and the cake-making, and the Tumblr-stalking, and the... I could go on and on. Add in recent events like her 1989 World Tour and her Twitter feud with Nicki Minaj, and the fact that Swift even has time to sleep at night is practically unbelievable. Her schedule is just way too insane.

So how does she do it? I know Swift must have a massive team of people around her to help organize her day, but even still, there's only so much a human being can accomplish in 24 hours time. Even Beyonce takes breaks sometimes, but Taylor Swift? It just doesn't seem like she'd ever have the time. Here's what I imagine a typical day in T-Swift's New York life is probably like:

Swift is an early-riser, of course. After waking up in her New York apartment, she immediately goes to make tea, eat some toast, and, of course, play with cats Meredith and Olivia. The two need some attention after a long night, and she makes sure that each of them feels loved and attended to before heading out.

Getting exercise is very important to Swift, and she makes sure she has enough time to get to the gym and look polished before heading back out. So what if people make fun of her post-gym blown-out hair? She looks good, and she knows it.

10 AM: Grab Brunch With Karlie & Lily

Swift, a big fan of anything considered a New York "must," loves getting brunch. On a typical day, she invites several of her closest friends to join, including Karlie Kloss and Lily Aldridge, NYC regulars. They drink mimosas and swap stories about their nights.

It's only a quick visit, but Swift has to say hi to her new godchild.

You just know Swift is the kind of person who calls her parents on the regular.

It's never too early to start planning the next album, and Swift is already meeting with executives from her record label to go over song choices and themes for the 1989 follow-up.

You can never have enough swan floats.

Mid-afternoon is prime baking time, and Swift makes a batch of Ina Garten-approved cookies each day that she promptly delivers to her neighbors and various strangers.

They may be apart more often than they'd like, but the couple always finds time to squeeze in a Skype session. Unsurprisingly, it's adorable.

5 PM: Rehearse For The Night's Concert

AKA sound-check a few songs while hanging out with HAIM and posting Instas of the empty arena.

During which Dunham tells her about some cool, up-and-coming celebrity she's recently befriended, causing Swift to immediately book said celeb to appear at her next concert. Gomez, meanwhile, tells Swift about her latest relationship problems, prompting the "Style" singer to give a "you shouldn't be treated like this" lecture that she decides to work into her tour that night.

Swift's 1989 tour goes perfectly smoothly, thanks to crowd-pleasing special guests (who knew she was friends with Cher, Springsteen, and the two remaining Beatles?) and the Gomez-inspired speech.

A few lucky fans come backstage to meet with Swift, who's still upbeat and perfectly coiffed despite just performing for two and a half hours.

In the car, she sends a "good night" to Harris (they're cute like that), posts a few backstage photos, ends her feud with Katy Perry and checks Twitter to see how much she's managed to change the entertainment world that day. It's a lot.

It's a late night for Swift, but that's nothing new. Now, though, it's time for bed, so she grabs Meredith and Olivia and turns on an episode of Friends. As she falls asleep, she makes a mental reminder to call Obama tomorrow. She has some ideas about climate change she'd like to discuss. Maybe they'll get brunch?

More like this
Taylor Swift Is "Spiraling" After Releasing "This Love (Taylor's Version)"
By Jake Viswanath
The Very Best Quotes From Dr. Taylor Swift’s NYU Graduation Speech
By Grace Wehniainen
Joe Alwyn Just Shared The Sweetest Taylor Swift Memory
By Sophie McEvoy
This Is How Taylor Swift Feels About Joe Alwyn’s Steamy New Series
By Alyssa Lapid
Get Even More From Bustle — Sign Up For The Newsletter