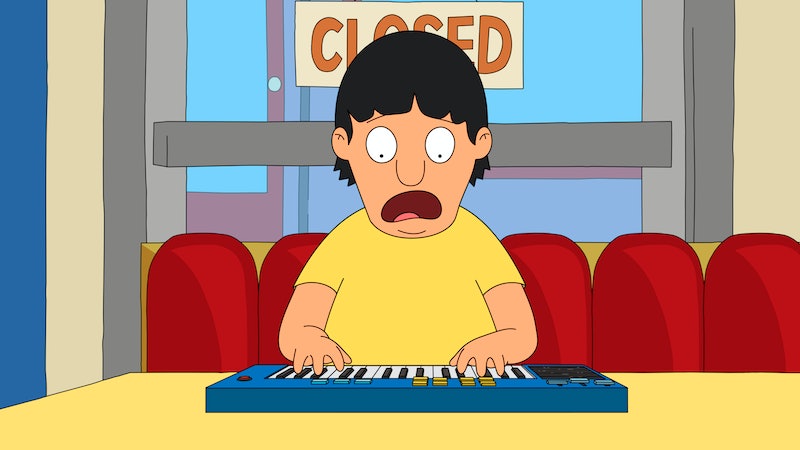 The Belcher family as a whole is one of TV's most hilariously relatable clans. Bob is the best dad with the worst luck, Linda is the wine-loving, fierce mama bear, Tina is a feminist queen, and Louise is the bunny ears-wearing badass, but I have a confession to make: my favorite Belcher of them all is Bob's Burgers ' Gene. As the middle child and only boy, Gene should suffer from the classic Jan Brady syndrome, but he is so confident in his own uniqueness that he never whines about being stuck in the middle. Instead, he just keeps marching through life mastering the artistry of keyboard fart noises, proclaiming his love for fashion, and being, well, Gene. He is easily the most underrated Belcher.

On a show overflowing with wonderfully bizarre and lovable characters, it is hard to stand out, especially when Tina and Louise are by your side. I think Gene holds his own, though, thanks to his unapologetic weirdness. His confidence is what makes him shine. Gene knows exactly who he is (a boy who refuses to let gender norms rule his interests) and what he wants (to be in the spotlight as an actor/director/musician/comedian.... OK, so he's not 100 percent sure what he wants to be just yet, but he is 11.) The kid deserves more attention because he's funny, silly, and a truly groundbreaking hero. Here are nine quotes that prove Gene is the most underrated Belcher of them all.

As a former thoroughly nonathletic child (and a current nonathletic adult), I feel like Gene is the perfect poster boy for everyone who detested gym class. Gene understands the plight of those freaked out by organized exercise and sporting events. He can't catch a spiral, but he is a wizard at conflict resolution. Only the latter is a valuable life skill, though — do you hear me, P.E. teachers?

No one gets a party started like Gene. He has no time for awkwardness, not when there could be dancing, eating, or engaging in merriment of any kind. Gene is the guy you bring in to make everyone else stop being so uptight. He is not afraid to cover himself in baked beans and run through a restaurant in his underwear, and everyone needs that kind of fearlessness in their lives sometimes.

3. "They're jealousy noises! You got your legs waxed and I didn't."

There is nothing Gene won't try... unless it involves snakes. He is also very open about his desires to do the same things his sisters do, including waxing his legs. Although to be fair, that could also have been a desire for a little father/son bonding since Bob had his done, too.

4. "My life is more difficult than anyone else's on the planet, and yes I'm including starving children, so don't ask!"

Gene may have invented first world problems, but he refuses to apologize for them. I admire that about him.

Gene may be the king of excess, but even he knows that repetition can strip the joy out of anything. He is a wise kid, even if he does spend a lot of time farting and talking about farting.

6. "Summer is awful, there's too much pressure to enjoy yourself."

More words of wisdom. I sincerely feel like this quote should be on a poster. The pressures of summer fun are all too real. Gene knows this and he is calling everyone out for putting so much emphasis on making the most of these warm months. Be like Gene and let no one shame you for skipping an expensive vacation in favor of watching Netflix and sleeping.

7. "That's how I want to go out: dehydrated and covered in tinsel."

Gene wants to live life to the fullest. His life goals are superior to everyone else's.

This is Gene's favorite proclamation. He is always exploring his identity. Sometimes that means he turns into Beefsquatch, Banjo the cowboy, or a singing Hans Gruber. Gene is a risk-taker, guys, and his risks pretty much always pay off.

9. "You should know when you hold hands with me, you are holding hands with everything I've ever eaten."

Not only is he honest, Gene is also on the front lines of pioneering safe hand-holding practices. He's not just cool, he's also practical.

I hope you now fully appreciate the many different facets of Gene. He will be the ignored Belcher no more! No one puts Gene in a corner. He's the patron saint of the weird and underrated.