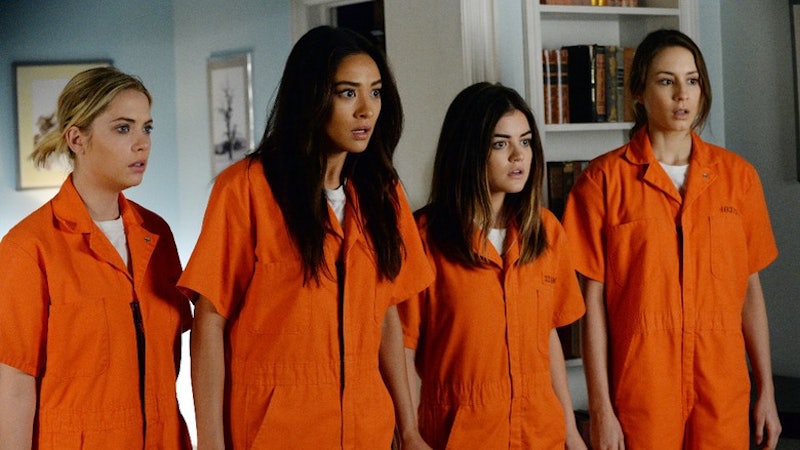 We're mere episodes away from Pretty Little Liars' Big A reveal, and if you've been watching this mystery unfold from the beginning, you know the pre-A anxiety is so real. We are so close to getting all of the answers to our questions about the real identity of Charles DiLaurentis, but that doesn't stop us from trying to crack the code before the "Summer of Answers" comes to a close. I have quite a few of my own Charles DiLaurentis theories, and while I thought that I put plenty of time and effort into backing them up with details, they barely hold a candle to some of the theories that other fans have put together. This is especially true of Pretty Little Liars theory videos, as the amateurs sleuths who created them may very well have solved all of the mysteries on this show — we just have to wait and watch to find out.

So if you're in search of a new theory, look no further than YouTube. Many fans have put together videos on whom they believe is the person underneath A's hoodie. Obviously, not all of these theories can be correct, but these videos pull details from the show that will make you rethink everything you thought you knew about A's identity. And for another take on the biggest Charles theories out there, check out Bustle's PLL podcast.

Here are some of the best Pretty Little Liars theories that YouTube has to offer. Happy sleuthing, friends.

There are so many reasons to believe that Wren is A, and after learning that Jason and Charles aren't twins (and therefore Charles isn't Spencer and Melissa's sibling), I'm convinced that this guy is the one hiding under the hoodie. This video talks about some of the bigger reasons why Wren could be A, but also goes into detail I never would have thought of — for example, did you know that a wren is considered a "magician of birds"? We know that A has a fascination with magic, as seen with the Great Charlemagne back in Rosewood. Just a tad suspicious, no? And for a different set of Wren clues, you can check out Bustle's own theory video below.

This theory suggests that Charles is really dead (it was posted before the episode in which Mona reveals that he is alive), but everything else in the video is pretty mind-blowing. We know that there is an Uber A out there, and all of these signs suggest that Toby's mom Marion could be Black Widow. In an interview with Entertainment Weekly before the Season 4 finale, showrunner I. Marlene King even said, "the Black Widow is definitely involved with our endgame Uber 'A' plan."

Also known as Black Veil, this character put flowers on Bethany's grave, and who would know to do that unless it was a friend of Bethany's from Radley?

3. Cece Was The One Who Lured Bethany To Rosewood

This theory doesn't necessarily make Cece A, but it does explain how Bethany ended up in the ground when Ali ran away. This fan suggests that Cece dressed up as Ali, went to Radley, and tormented Bethany in order to have send her after Ali.

There are plenty of reasons why this user suggested Melissa could be the one running the show, but on Pretty Little Liars, the devil is in the details. Showrunner I. Marlene King hinted that the song "Walking After Midnight" held a significance for Big A. This user found that the song is also the name of a horse farm, owned and operated by a couple named Melissa and Charles.

This video comes straight from Bustle, and Samantha Rullo's theory on Garrett secretly being Charles is pretty compelling. Garrett's "dead face" certainly looked a lot like Mona's, and we all know how that turned out.

Those big, blue eyes we see peering out at us from behind a mask? They very well could belong to Noel. At least we don't have to wait much longer before finding out which Pretty Little Liars fans hit the mark with their Charles theories.