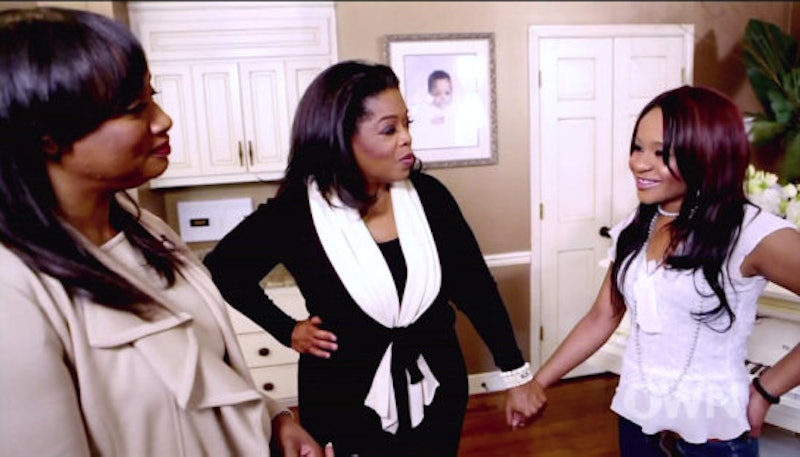 After spending the last six months in a coma, Bobbi Kristina Brown has passed away. But, rather than talk about the details of her death, I think it's important to reflect back on her life. The child of Whitney Houston and Bobby Brown was just 22 when she passed, but in that time she amassed an amazing amount of wisdom. I suppose growing up in the public spotlight forced her to be more aware, as, I'm sure, did losing her mother when she was just 19. Bobbi Kristina Brown spoke about her mother in a 2012 interview with Oprah Winfrey, and sounded wise beyond her years. In fact, those mourning her loss can look to the interview as a source of inspiration, themselves.

In the 15-minute interview, Bobbi Kristina talks openly with Oprah about her mother, who had died less than a month before the interview took place. But, her words about dealing with the loss of her mom are just as applicable today for those dealing with Bobbi Kristina's own untimely passing.

"I'm getting through it ... I just trying to keep going," Bobbi Kristina told Oprah when asked how she was doing. She then opened up about how her mother's spirit is still very much alive around her and in her. "She's always with me, I can always feel her," she said, smiling. "I hear her [saying] 'Come on, keep moving, keep going, I'm still right here.'"

It's always hard to lose someone, but Bobbi Kristina was a big believer in her mother's spirit, and the importance of seeing that the body is just flesh, but someone's soul is there forever. It's sad to see the bright, young girl speaking so strongly about her resilience after her mother's death. But, if anything, it shows that Bobbi Kristina would want those around her to keep moving forward, and to know she, like her mother, is always there with them.

And, for anyone who has anything to say about the circumstances surrounding her death, Bobbi Kristina has an answer for that as well, as she said about her mother's passing: "We have so many people saying so many other things, but they don't know who she really was. I want people to know that everything people are saying about her, all that negativity, that's garbage."

Bobbi Kristina Brown's family is no doubt going to have a hard time with her death, but her interview with Oprah is a great reminder that moving forward and keeping that person's spirit alive within you are some of the best ways to mourn. Keep the positivity going and the energy light, and Bobbi Kristina Brown will never truly be gone from the ones she loved the most. After all, like she said about her mother, "her spirit is strong" and so is Bobbi Kristina's.