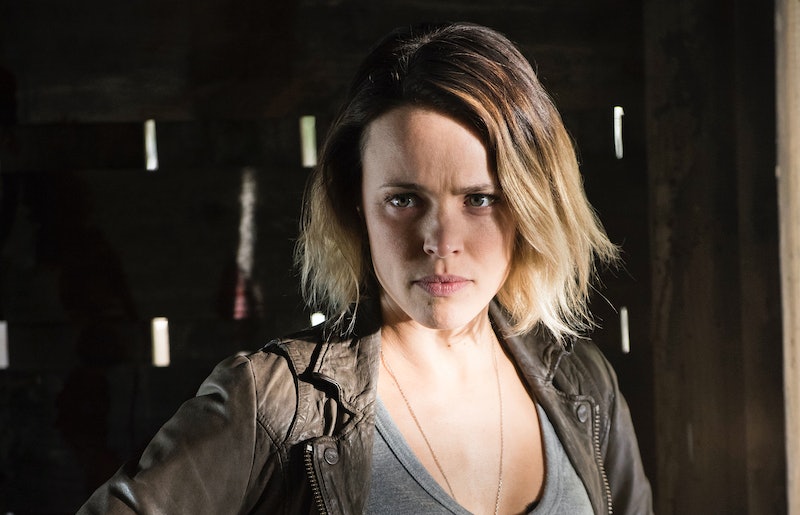 I was absolutely thrilled when True Detective added a female detective for Season 2. The fact that she's being played by Rachel McAdams only makes it better. Yet while there's a lot to celebrate about the character of Ani Bezzerides, Sunday night's episode suggested that she has a tragic backstory. We already knew that she is estranged from her family, loves knives, was raised in a spiritual commune, and prefers to be on her own. However, "Church in Ruins" added another big piece to her story, as it appears that Ani was sexually abused as a child.

A childhood trauma has been heavily implied all season on True Detective, but the events of this week's episode essentially confirmed it. Ani had previously made a few comments about how all of the children raised in her dad's commune ended up in jail or having killed themselves, and how she was the only one to really get out.

Ani also has an established affinity for knives. The first time we see her, we see her wall of knives. Clearly, she's got them around for protection, but there's another layer there, too. Actually, make that two more layers. First layer, protection. Second layer, her mom was into woodworking, and used lots of knives, one of which Ani kept after her mother's suicide. Now it can be implied that part of this stems from a need to protect herself, having suffered this trauma as a child.

On one hand, while I'm really glad that Ani is clearly a powerful, strong woman who can kick lots of butt, I'm also frustrated to see this sort of storyline, which has essentially become a trope. It feels like any time we get a powerful, strong woman who likes to kick butt in film or television, it's because she was abused or attacked in some way in her past. While I'm glad Ani has overcome her past to become the powerful woman she is today, I would have rather seen True Detective give her all these badass qualities for no reason other than her being a smart, strong detective who wants to be prepared for all situations.

I guess I should put that on the wishlist for True Detective Season 3 — a female character whose strength isn't born of trauma.

More like this
Everything To Know About True Detective Season 4
By Brad Witter
'Stranger Things' Star Joe Keery Ditches The Upside-Down With New Single "Change"
By Radhika Menon
Adele’s All-Female Lineup Includes Kacey Musgraves, Mahalia, & Self Esteem
By Shahed Ezaydi
6 Mind-Blowing Fan Theories About How Stranger Things Will End
By Kadin Burnett
Get Even More From Bustle — Sign Up For The Newsletter