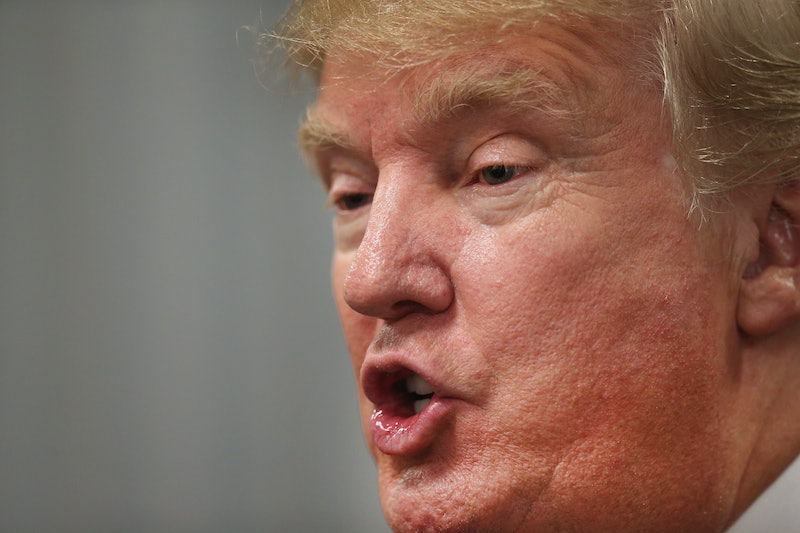 Blah, blah, blah. Trump, Trump, Trump — same thing. Since Donald Trump announced his candidacy for the 2016 presidential race in June, the mega-billionaire has spoken up and out about many issues, and no one is shocked. Most of these gems came out of Trump's mouth during his actual announcement speech and are fun to replay just for the giggles. But the truth is, Trump's not only around to make us stomp our feet and cry real tears at all of the embarrassing things he says. He happens to be at the top of the polls for GOP nominees. According to CNN, Trump is at 18 percent with Republican approval, with Jeb Bush following behind at 15 percent. But let's forget about that scary fact for a moment and remember all the dumb things that Donald Trump has said since he announced his campaign for president.

Even before he threw his hair... erm, hat, in the ring to be the GOP nominee, Trump has been known to say outrageous things. There was that "casual" time in 2012 when he tweeted that someone called his office to tell him that President Obama's birth certificate was a fraud. And let's not forget that time he got on Twitter and called Rosie O'Donnell "rude, crude, and obnoxious." In fact, Trump seems to like to sling dirt at pretty much anyone, and his candidacy, so far, has lived up to his reputation.

When He Stated That Everyone Comes Crying To The United States

During his campaign announcement speech, Trump pointed out that all of the other countries like to come to the United States with their problems and called the country a "dumping ground." It's great to hear your country being referred to like a garbage dump, isn't it? Yeah, not so much. And, because he's The Donald, and he's going to keep talking, he didn't retract his statements. Instead, the real estate mogul elaborated on his comments and went on the defense as well, reported Real Clear Politics.

The U.S. has become a dumping ground for everybody else's problems. Thank you. It's true.

When He Told Us That Politicians Are Basically No Good

During his campaign announcement speech, Trump was sure to promote his own agenda by doing what he does best: Putting others down. He reminded the crowd of his view that politicians, though they are trained to lead this country really shouldn't. And yeah, politicians make mistakes. But the prospect of Trump leading us to the "Promised Land" (whatever that is), seems highly unlikely.

Well, you need somebody, because politicians are all talk and no action. They will not bring us — believe me — to the Promised Land.

When He Said Things That Were Racist, Terrible, And Very Uncool

After Trump made the statement about immigrant-linked crime, the Washington Post pointed out that they were just untrue. A range of studies proves there is no evidence that immigrants commit crimes more than native-born Americans, reported the Post.

No, Donald Trump, just because you know someone from a particular country doesn't mean you can prove you don't like that country. No, spending money doesn't really mean you love someone. So, someone from China gave you $15 million? So... you're $15 million richer? Yeah, that's pretty much all that means.

People say, "You don't like China." No, I love them. ... I just sold an apartment for $15 million to someone from China. Am I supposed to dislike them?

When He Said John McCain Wasn't A Hero

What Trump said about John McCain that just shouldn't be sitting quite right with anyone. After he made comments about McCain's history as a prisoner of war, Trump refused to apologize to the Arizona senator. A number of Republicans blasted Trump for his poor choice of words, including former Texas Gov. Rick Perry who asked Trump to drop out of the race, according to Fox News. Trump responded by saying, "I'm certainly not pulling out. I'm leading, and I'm leading in many states." This is, unfortunately and hilariously, true.

When He Made His Initial Announcement, And We Are All Still Laughing

Although he is leading in the polls, Trump is arguably the candidate that makes us giggle the most by aggregating all of the really bonkers things to say and then actually saying them. There was that one time when he linked the two independent clauses, "I am running for president," and, "We are going to make our country great again" — what a side-splitter! Keep playing the clown card, Donald Trump. We love you for it.

Ladies and gentleman, I am officially running for president, and we are going to make our country great again.