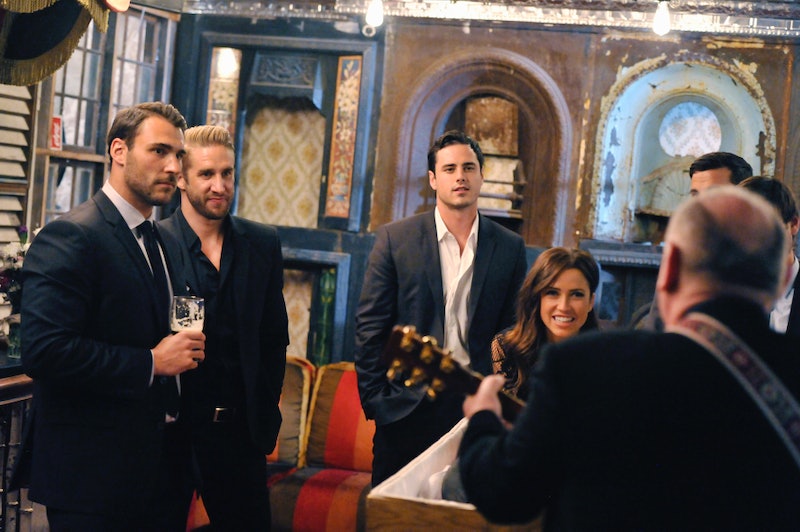 Let's get right down to the important stuff, guys: Are Bachelorette contestants Shawn B. and Ben H. friends? The short answer? Hell yes — I would go so far as to call them besties. As frustrating as the "I didn't come here to make friends" types can be on these kinds of shows, nothing perplexes me more than how the men and women competing on The Bachelor and Bachelorette for the affections of the same person often become the best of friends. I mean, it does make sense: They're trapped in a house together, they travel together, they don't have anything to do for entertainment except drink and talk to each other, and I guess they do, at least, share a built-in common interest.

But, when you look at two guys like Ben H. and Shawn, who both made it to the Final 3 and were ostensibly in love with the same woman at the same time, it seems like that could put a bit of a damper on any budding friendship. However, just a quick look around Instagram will show you that, no, these two were perhaps best friends with each other while also falling in love with Kaitlyn. And, what a dashing couple of besties they are. But, they're not alone — most of the final guys this season (excluding Nick who does not specialize in making-friends-while-falling-in-love) seemed to have a great time together, running around Ireland in between dates and giving each other piggy back rides. But, Ben H. and Shawn B. seemed like the closest in the bunch. We might even be able to expect a little visit from Shawn when Ben H. inevitably becomes the next Bachelor. Here's all the proof we have of their BFF status.

It's seemed a little odd that this season of The Bachelorette basically spent the entirety of the international portion of the show in Ireland. But, what it lacked in variety, it totally made up in cute photo ops for the men, evidence of which you can find all over their Instagrams. This is actually from a group shot of some guys that Ben H. felt the need to crop to really drive home that his best pal Shawn was sitting on his lap. Also, probably because he looks great in it.

It seems like Ben and Shawn know tons of BFF-poses and they have a very strict BFF-agreement to only practice them with each other.

Where Shawn B. leads, Ben H. will follow, even it's pretty unnecessary to state that fact. But, you may notice another bestie in the above shoutout...

Within Shawn and Ben's friendship there seems to be room for one more (and every single one of his beautiful teeth). Cupcake Chris gets special shoutouts all over Ben and Shawn's Instagrams. So, while he may not always get the spot of honor in best friend photo ops (Ben's lap), but he definitely has a place in their hearts.

If you think they weren't skipping around all over Ireland singing, "We're the three best friends that anybody could have," you are mistaken. And, I'll just leave you with that image.