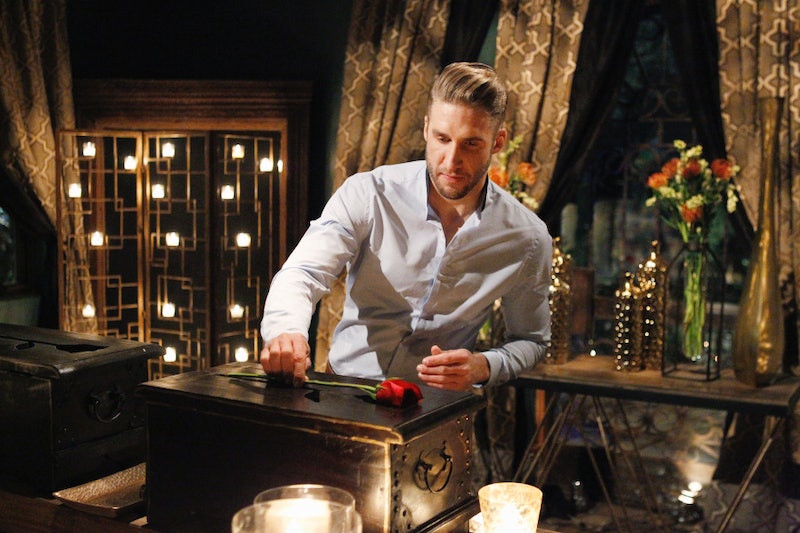 So, remember that time I conducted a highly scientific study during which I determined that The Bachelorette's Shawn B. is actually Ryan Gosling's long-lost twin? Well, it got me thinking: What else can we learn about Kaitlyn Bristowe's resident tall drink of water? Since regular ol' Internet stalking just wasn't enough for me — and, well, because these guys really weren't super famous before The Bachelorette, so there's not much info about them swirling around out there — I took to his Instagram to see what it can tell us about Shawn B.'s real life. (Can we finally drop the "B" now that the amateur sex coach is gone?)

Now, we already know that he looks like a mystical hybrid between Gosling and Calvin Harris, that he's adorable, and that Bachelorette producers are actively trying to make it seem like he's doubting his connection with Kaitlyn now that Nick Viall is officially back in the game. But, that's all show stuff, and I want to get to know him beyond the information ABC supplies. His prevalence on the show, and in my heart, has urged me to learn more, and I'm nothing if not an expert Instagram creep. Here are 13 things that Shawn's 'gram can teach us about his non-reality show existence:

Always an important quality when looking for a husband, if you ask me.

2. He's A Dog Person And A Taylor Swift Fan

So, basically he's every girl's dream guy. As if we didn't already know that.

3. He Hangs Out With Models?

So, was this a one-off thing or does he regularly hang out with the likes of Gigi Hadid? And, does Kaitlyn know about his model connections? Is his connection to the fashion world the reason he knows how to get his hair so perfectly coiffed? I have so many questions.

4. He Looks Good With Long Hair

Just look at that sick flow. That's #hairgoals right there.

5. He Loves A Good Pic Stitch

I think every fourth or fifth picture on his Instagram is a collage. I'm not even mad, I'm just impressed.

6. All Of That Personal Training Has Paid Off

Did anyone else swoon and pause the TV when he lifted up his shirt to reveal his abs during last week's rap battle group date and then have a sudden desire to see more and never stop looking until the day you die? Cool, I just wanted to make sure I wasn't alone.

Kaitlyn has talked about how important her family is to her, and it's clear from Shawn's Instagram that he's extremely close with his. If these two aren't a match made in heaven, then I'm just going to have to be single for the rest of my life, because love doesn't exist.

But, really, who doesn't love a good pumpkin coffee every now and again? #BasicAndProud

9. He Once Worked For An Insurance Company

OK, so I'm actually a little bit ashamed of myself for the deep stalking that went into this. I might have Googled Arbella Insurance along with Shawn's name found that he was, at one time, a Loss Control Consultant at Arbella in Windsor Locks, CT. Please try not to judge me too hard.

11. He Had A Hernia One Time, But That's Not Important Right Now

Aaaaaaand I lost my train of thought.

A marketable skill if ever there was one.

13. He Was The Kid That All The Girls Had A Crush On In Middle School

I mean, I know I would have.

More like this
JoJo Fletcher & Jordan Rodgers Got Married In A “Playful & Fun” Wedding
By Grace Wehniainen
Stormi Just Walked A Red Carpet With Mommy Kylie Jenner & Daddy Travis Scott
By Hugh McIntyre
Everything We Know About Chèrie & Jessey’s Abrupt Exit From Bling Empire
By Alyssa Lapid
Twitter Is Upset About The 'American Idol' Top 3 Results: "Who TF Is Voting?"
By Jake Viswanath
Get Even More From Bustle — Sign Up For The Newsletter