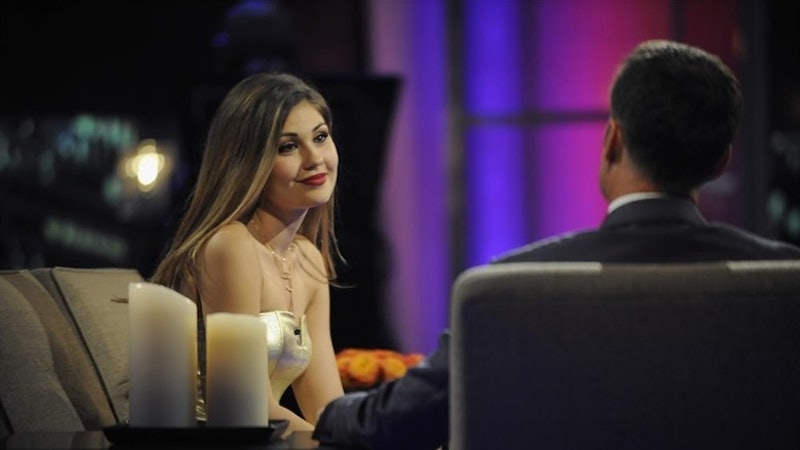 Oh, Britt — will this continually scorned princess of Bachelor Nation ever find ABC-contracted love? You've got to admit, the lady has remained relentlessly optimistic while trying and failing to find love on television. Even after Chris Soules made her weep in a driveway; even after ABC pulled a fast one on she and Kaitlyn, making them share a Bachelorette spot; and even after the men ultimately chose Kaitlyn over her through a patented Bachelor-democratic process, this bachelorette kept her little heart open and Britt ultimately started dating Brady Troops, the contestant who showed up at her hotel room while she was drying her eyes to see if they could still try to make something work.

And even though Britt and Brady dated for a few months — and even got special pre-credit sequences at the end of Kaitlyn's episodes — it ultimately didn't work out. But things seemed to end amicably as both Britt and Brady wished each other well on Instagram, with Britt saying, "Just because we didn't work out romantically doesn't mean we don't continue to value and love each other as brother and sister in Christ... it was always a beautiful, honest, and valuable relationship, and continues to be." Well, that sounds like the kind of ex you want to have — it also gives some pretty good guidelines for the type of guy Britt hopes to one day work it out with romantically.

Britt also said in her breakup announcement that she believes "everything happens for a reason" and — here's a positive spin — maybe the reason it didn't work out with Brady is just because there's another Bachelor-bro out there just waiting to grab their chance with Britt. So, with Britt's best romantic interest in mind,I have a few ideas for who might be her Bachelor soulmate:

My number one pick for Britt is Emily Maynard's former fiance, Jef-with-one-f — it just makes sense. Jef totally has that same L.A. hipster vibe that Britt does; he hangs with a cool non-Bachelor crowd, and I think Britt could do with some distance from the franchise (while still keeping her romantic options intrinsically linked to it); and as I recall, he was nice, wholesome, spiritual, creative, and cool, all things Britt would say she's looking for. He also reminds me of a smaller, less music-y version of Brady, so why not see if lightening can strike twice, but last a little longer this time?

Marquel, though he only made it to he middle of Andi's season, was at one time rumored to possibly be the first black Bachelor (and certainly would have been the most stylish rose-giver ABC has ever had); but the handsome, sensitive fellow didn't get the gig. You know who else knows about missing out on being the Bachelorette by a hair? Sure, I seem to recall a slight bit of drama with Marquel on Bachelor in Paradise, but Britt strikes me as someone who needs a little drama in her life to keep things interesting. Plus, Marquel brought cookies to his first cocktail party with Andi... Marquel is a keeper.

Graham apparently told Us Weekly that after seven years of looking for love on Bachelor-related programming, he's ready to call it quits on competing in the franchise — which is just perfect because he can date Britt without ever having to go on another show! Graham may be a little too willing to go on these shows, but maybe that's because he's always seemed like a nice, easy going guy, and therefore not at risk of totally embarrassing himself every time he gets in front of a camera. He might be a nice, grounding presence for Britt who still hasn't quite figured out how to not let this franchise completely shred her emotionally every time she gets involved with it.

The only thing that wasn't absolutely perfect about the first season of Bachelor in Paradise was how little time Brooks was given to find a match at the end of the show's musical chairs format. I know Brooks broke sweet Des' heart back in the day, but seeing as she seems to have a pretty solid relationship with Chris (the guy that she chose after Brooks hightailed it out of there), it looks like his emotional honesty was ultimately a good thing. And goodness knows Britt could use some emotional honesty. Brooks is just nice. And cute. He also just seems like an upstanding guy with an underlying depth that Britt has been trying to make work within the confines of ABC casting. Look no further than Brooks, Britt — the combined power of your hair could rule the network.