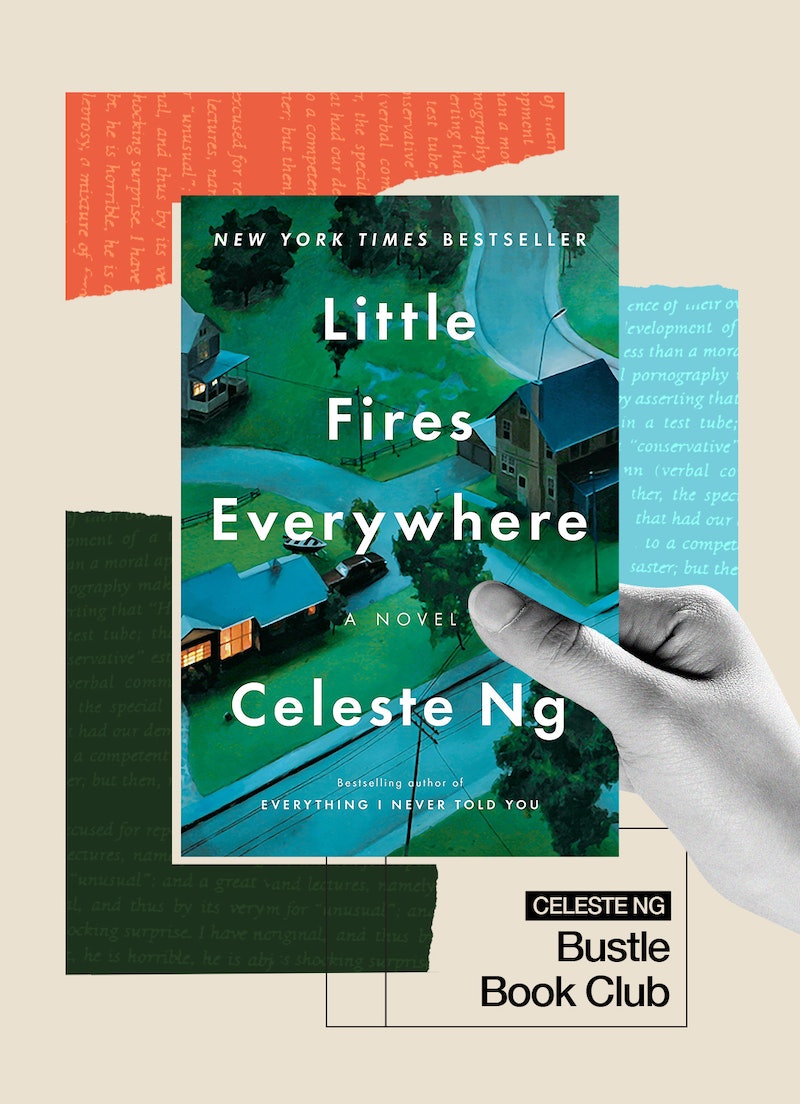 One night in 2017, Celeste Ng was sitting on the couch watching Big Little Lies when she had a revelation. She was so gripped by Reese Witherspoon’s portrayal of self-righteous housewife Madeline Mackenzie that she couldn’t help but draw similarities between her and Elena Richardson, the meddling mother at the center of her own novel, Little Fires Everywhere. “I said to my husband, ‘Wouldn’t it be amazing if in some magical universe, Reese read my book and decided to option it?’” Ng tells Bustle. “Then somehow it happened.”

Now Witherspoon, with the help of her co-star and fellow producer Kerry Washington, is helping to bring Ng’s novel to life on screen. The eight-episode series, which premiers on Hulu on March 18, follows the unraveling of Elena Richardson’s (Witherspoon) perfect life after she welcomes newcomer Mia Warren (Washington) into her orbit in the suburban idyll of 1990s Shaker Heights, Ohio — Ng’s own hometown.

During the adaptation process Ng occasionally sat in on the writer’s room, an experience that the novelist found both illuminating and educational. “I read all the scripts and gave them notes on Shaker Heights, like 'no one in Shaker Heights would have that name,'” she says. “I was sort of like a tuning fork for [the writers] so they could ask, ‘Are we harmonizing in the right way? And frankly, they were.”

Ahead of the show’s release, we spoke with Ng about what fuels her writing process: the Girl Scout Cookies that keep her going and the hobbies that help her unwind.

On being the "patron saint" of up-and-coming writers & what she’s reading now:

I don’t know how I got all these followers on Twitter, but my thought is that if I have that platform, I want to use it for boosting the voices that I feel like don’t get heard. There's a great book called Interior Chinatown by Charles Yu. It’s a really brilliant exploration of race and what it means to be an Asian American. Another book that I just finished is called Minor Feelings by Cathy Park Hong. It's a series of essays that are [about] her understanding how she fits into the race conversation. And then in the stack of books that are in my “to-read as soon as I get a moment to breathe [pile]”, I've got The Care and Feeding of Ravenously Hungry Girls by Anissa Gray and Such a Fun Age by Kylie Reid.

On crafting as self-care:

I use crafting as a brain break. Because so much of my job involves reading and writing, every now and then I need something that has no words in it at all. I also crochet as a way of managing my own anxiety. I'm an introvert, so when I started to get a platform and I had to do events, I got really nervous. One of the ways I coped with it was crocheting granny squares, which are these very little patchwork squares. It was my break from writing and all of it. After I did a bunch I started sewing them into an afghan. So there's now a big warm, snuggly bright-colored afghan in my living room that I wrap up in when I'm watching TV. I like to think of it as this blanket that I have physically made out of my own stage fright and anxiety, which I now use to relax.

On the app that keeps her in the zone:

While I’m writing I use an app called Forest. I tell it how long I want to work and then it takes over my phone. So every time I work for 25 minutes, it plants an imaginary tree in my field. And if I switch away to do something else, the tree dies. I think if you do enough trees they will actually plant a tree in real life. I don't think I've actually gotten enough to plant a real tree yet, but it's a nice goal. I treat myself like a kindergartener who needs a lot of incentives to keep going. I’m like, “If you work on this today you can have a treat.” Which can be Twizzlers, or the Girl Scout Cookies that I’ve got in my kitchen right now. Food is a big motivator for me.

On her deskside decor:

There’s a cross-stitch that my friend Whitney Scharer, who's also a writer, made for me. Somebody had said online, "Don't try to explain yourself to idiots. You're not the f*ckface whisperer." And I thought it was so hilarious that she cross-stitched it for me in this delicate little thing with flowers on it. It's hanging over my desk, as a reminder to put energy in places where it's going to be useful. Not to argue with people on the internet or worry a lot about things that I cannot control. I also have a cross-stitch that somebody on Twitter made for me of a Colson Whitehead quote that he said when he won the National Book Award: "Be kind to everybody, make art, and fight the power.”

More like this
The 'Firefly Lane' Book Ending Teases Way More Tears To Come In 2023
By K.W. Colyard
'Bridgerton' S3 Teases Exciting Social Season For Penelope Featherington
By Bustle
Lib & Will’s Romance In 'The Wonder' Is Very Different From The Book
By Sam Ramsden
Allie Rowbottom Will Have Her Feminism With A Side of Botox
By Samantha Leach
Get Even More From Bustle — Sign Up For The Newsletter